What if the card game Blackjack was done in the style of Super Street Fighter II Turbo? The crew of Stage Clear Studios were thinking this and came up with the subtly titled Super Blackjack Battle II Turbo Edition - The Card Warriors. They wanted players to know right away that they were, as they put it, referencing "a well-known arcade fighting game from the '90s" the moment you launched the title. Upon startup you'll immediately see a mock FBI "Winners Don't Use Drugs" screen, which is then followed by a shadowy figure shuffling cards, concluding with the now-illuminated fellow throwing said cards toward the screen. You're then greeted by the title screen, the words "BlackJack Battle II Turbo" being superimposed in front of the ginormous word SUPER, radiating electricity and fire. 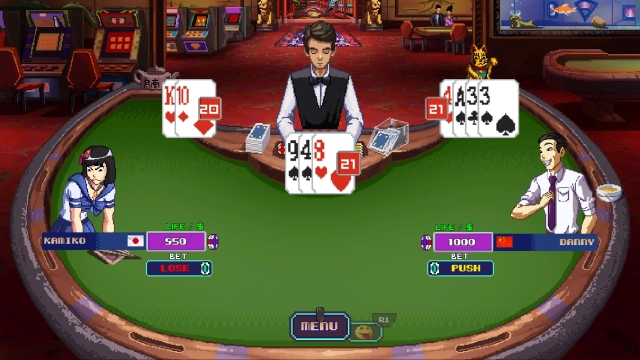 From there you eventually reach the player selection screen, where you're able to choose from a variety of interesting stereotypes from around the world. To name a few, there's the well-adjusted Mark, an American undercover agent; Kamiko, who is out to avenge a death in the family while dressed like she's from Sailor Moon; and then there's the French Marcel, who is donning a beret, a striped shirt, and a comically-long mustache. Once you've chosen a character, you're flown to an opponent's country, where you, your foe, and the dealer play a battle of Blackjack in a nicely-detailed pixel art setting. Such backdrops include a bullfight, a heavily-guarded villa with crates of "sugar," and a relaxing ocean view in Australia. Defeat will lead to a post-fight scene with your rival mocking your loss, followed by a continue screen where giant numbers count down to zero.

Now for those unaware, Blackjack is a card game where you and your adversaries must keep pulling cards while up against the dealer, with each collected card counting upward. The main goal is to get on or close to 21 without going over. If you leap over 21, you lose, and if you manage to get closest when compared to the dealer's cards, you win. Simple. So what unique aspect does Super Blackjack Battle II Turbo Edition bring from a gameplay standpoint? Absolutely nothing. Once you get over the initial shtick of "Street Fighter 21," which lasts for all of three minutes, what you're left with is a very straightforward game of Blackjack. But even that's executed questionably.

The way "fights" are set up is that there's a limit of ten rounds with each opponent. You're both playing against the dealer, with the main objective being that you must have more money than your competition once those ten rounds conclude; that or they lose all their chips in an unfortunate bid. Now here's the thing about this game's computer difficulty: the dealer AI cheats and your rival AI is usually dumb, the latter either under or overbidding. With your opponent constantly making silly bids, you can simply make the lowest bid possible when you're in the safe zone. For instance if it's round seven, and you have $1000 and the other person has $500, just keep bidding $50; you'll only lose so little if you fail the round and there's no way they'll come back... especially if they continually only bid $100. 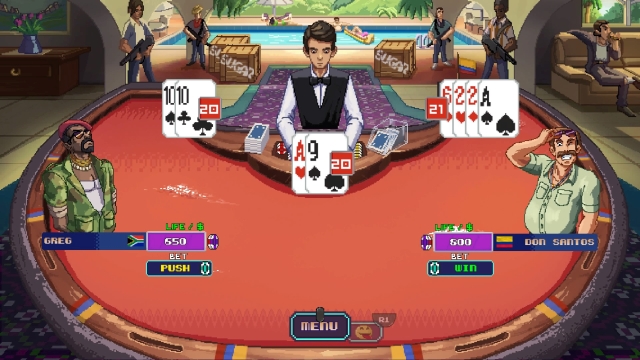 This begs the question: how much plain Blackjack are you willing to play in a video game? Outside of gameplay, the only main thing going on with this product is that ten characters have their own brief ending sequence. If you do the math, that means viewing them all will require playing approximately 1000 rounds of Blackjack, and that doesn't count rematches whenever an AI opponent actually grows a brain. There's two additional modes, but they're literally just Blackjack with the dealer, and Blackjack with up to four AI and/or local real players. There's not even an option to play against players online. Though... if you're in a scenario where you and three other friends at your place want to play Blackjack, you're better off playing an actual deck than paying additional money for something that's literally style over substance.

If you enjoyed this Super Blackjack Battle II: Turbo Edition - The Card Warriors review, you're encouraged to discuss it with the author and with other members of the site's community. If you don't already have an HonestGamers account, you can sign up for one in a snap. Thank you for reading!

© 1998 - 2023 HonestGamers
None of the material contained within this site may be reproduced in any conceivable fashion without permission from the author(s) of said material. This site is not sponsored or endorsed by Nintendo, Sega, Sony, Microsoft, or any other such party. Super Blackjack Battle II: Turbo Edition - The Card Warriors is a registered trademark of its copyright holder. This site makes no claim to Super Blackjack Battle II: Turbo Edition - The Card Warriors, its characters, screenshots, artwork, music, or any intellectual property contained within. Opinions expressed on this site do not necessarily represent the opinion of site staff or sponsors. Staff and freelance reviews are typically written based on time spent with a retail review copy or review key for the game that is provided by its publisher.