Crossover fighting games were quite the buzz during the mid-to-late 1990s. SNK had The King of Fighters, which united their fighting IPs into a three-team battle format. Capcom created the Versus series, pitting several street fighters against a legion of Marvel super heroes. Sega's AM2 development team, well known for their arcade games utilizing groundbreaking 3D visuals for its time, also got in on the act. What they eventually crafted is Fighters Megamix, a 3D fighting mesh that combines the cast of Virtua Fighter 2 and Fighting Vipers. However, unlike the other two crossover properties, this title unfortunately became an obscure game; this is mainly due to its exclusivity to the Sega Saturn, which was also released during the system's twilight years.

That's not to say this is some hidden gem that will complete your life once played, but it's still an entertaining experience if you're even a tidbit into 3D fighters, specifically Sega titles. For combat, Fighters Megamix's core reuses AM2's own three-button system where one blocks, one punches, and one kicks. Of course, there's more depth when you perform each character's unique move set, each requiring a combination of button presses and motions. In Virtua Fighter 2's case, the system is used in a more technical, tactical way with an assortment of martial arts-inspired moves; you get punished hard for failing a maneuver. Fighting Vipers is more "arcadey" with its methods, having the cast rely on button-mashing combos and extravagant moves on a whim when winning fights. 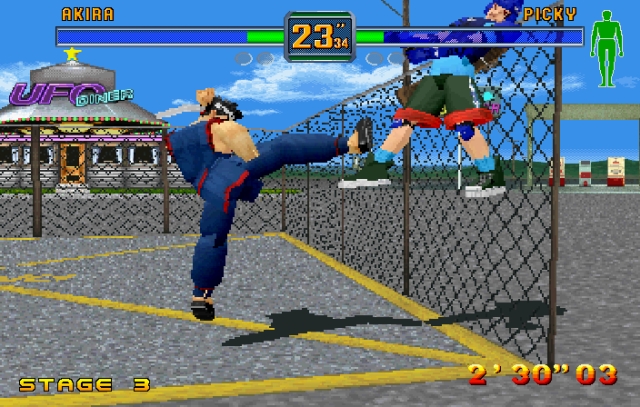 As you can tell, these two styles make for an oddball clash when mixed together. The devs attempted to find a middle ground by allowing you to switch between the two modes in the options menu, but Fighters Megamix openly sways in favor of Fighting Vipers' carefree, broken attitude towards combat. In Fighting Vipers mode, a Virtua Fighter like Akira, known for his devastating close-ranged attacks, is at a disadvantage against the Fighting Vipers metal singer Raxel. With two simple taps forward and the press of the punch button, a special attack is unleashed, indicated by a white flash, where he thrusts his guitar forward. If successfully landed, Akira will be launched backwards, crashing several feet away. This can be performed as many times as you want. In Virtua Fighter mode, this crazy attack is now a normal move, but its long reach is still maintained.

That's not to say being a Virtua Fighter is impossible in Fighting Vipers mode, but if you intend on playing Fighters Megamix with a blunt Virtua Fighter mindset, then this isn't for you. Also, while the game is still very much intentionally broken, the devs have added features to make for a more diverse experience. Virtua Fighter characters have been injected with similar "white flash" special attacks in Fighting Vipers mode, though they're not exactly on par with the prowess of the Fighting Vipers cast. Since this game succeeds Virtua Fighter 3's arcade release by a few months, the devs have incorporated the dodge move from that title, allowing characters to evade into the background or towards the screen. Not surprisingly, moves from Virtua Fighter 3 are featured as well. There's also the inclusion of a recovery button, allowing characters to quickly gain footing when knocked in the air. 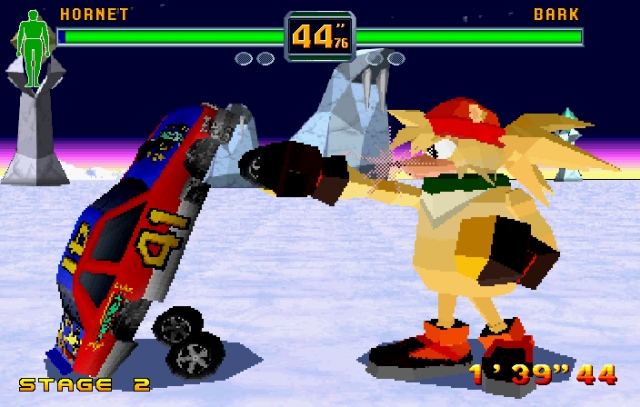 But despite all the various imbalances, there's a main takeaway: you're not suppose to take the game seriously. There's a reason why it favors Fighting Vipers' style so heavily, because Fighters Megamix is more a lighthearted celebration of AM2's works up to this point. This becomes all too evident when you're unlocking extra characters, a process that's done when you fight through various character lineups in single-player mode. Lineup B, for example, tasks you with defeating seven Virtua Fighters. The first six fighters are standard opponents you face in that respective series, but when you eventually reach the seventh fighter, it's revealed to be... Kids Akira! Yes, the very same chibi, big-headed version from the Virtua Fighter Kids spin-off.

At least something like that is fighting game-related, right? But then you reach the end of lineup D and you're confronted by... Janet from Virtua Cop 2! Yes, the very same Janet who's not even a playable character in her original game unless you perform a cheat code in the Saturn port. However, she's a fully-constructed character here, complete with a Virtua Cop stage, theme, and even a special attack using her gun. The silliness doesn't end there as the final opponent in lineup F is the protagonist of Rent-A-Hero, a goofy super hero game released for the Japanese Mega Drive. The game was made by Sega R&D 8 which, for those unaware, was AM2's prior name. Hilariously, this character has a powerful projectile that can keep opponents at a distance. 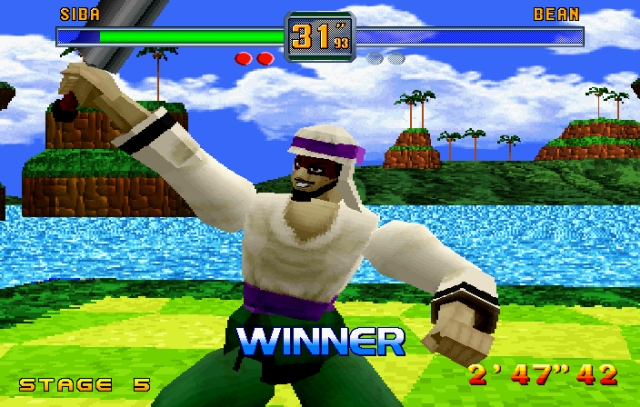 Lastly, in order to unlock the final hidden character, you're expected to have played the game for 84 hours total. If you accomplished this, then congratulations: you can now beat up everyone with AM2's palm tree logo. Fighters Megamix is goofy, but that's the point. Not every fighting game in existence has to be some kind of technical masterpiece for it to be a solid experience; it's very telling that a team like AM2, famous for making a technical fighting game series, is the one making such a statement. If you've enjoyed the prior ports of Virtua Fighter 2 and Fighting Vipers on the Saturn, and you have a sense of humor, then Fighters Megamix will be a delight.

If you enjoyed this Fighters Megamix review, you're encouraged to discuss it with the author and with other members of the site's community. If you don't already have an HonestGamers account, you can sign up for one in a snap. Thank you for reading!

© 1998 - 2022 HonestGamers
None of the material contained within this site may be reproduced in any conceivable fashion without permission from the author(s) of said material. This site is not sponsored or endorsed by Nintendo, Sega, Sony, Microsoft, or any other such party. Fighters Megamix is a registered trademark of its copyright holder. This site makes no claim to Fighters Megamix, its characters, screenshots, artwork, music, or any intellectual property contained within. Opinions expressed on this site do not necessarily represent the opinion of site staff or sponsors. Staff and freelance reviews are typically written based on time spent with a retail review copy or review key for the game that is provided by its publisher.