Space invaders! Jess Baptiste VI, better known as FU, is a rambunctious prince that leads an assault on planet Earth, with Santa Destroy being ground zero. Unfortunately for this distant traveler, a "passing assassin" also resides in this city, an otaku by the name of Travis Touchdown whose beam katana was won at an online auction. As the onslaught begins, Travis steps out of his motel after being awakened from his nap and itchin' for a fight; doesn't matter that he's in casual mode, with hair down, shades off, neck brace on, and boxers exposed, he's ready. FU, after having learned Travis destroyed one of his subordinates, becomes intrigued and formulates a plan: have eight of his "Galactic Superheroes" fight Travis, one-on-one, to determine the planet's fate.

Quite the fantastical opening, but add in the fact that this is a Suda51-spearheaded affair and with that comes his trademark insanity. You will confront abstract situations and unrestrained violence, along with an excessive amount of references about wrestling, music, movies, video games, and what not; every "stage" is treated like an episode of a nonexistent show, each one starting with a psychedelic opening sequence reminiscence of older Ultraman shows; there are short discussion segments dedicated to Takashi Miike films; important characters get brutally beaten or dismembered, and they nonchalantly walk it off; sushi food stands unironically have some of the best rap music you'll hear in and out of a video game. And these are just small examples of the absurdity you'll encounter in a game touched by Suda51. 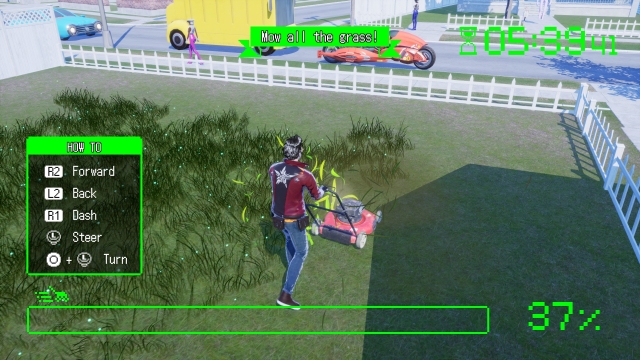 As the latest title in the series, No More Heroes III's combat also serves as an amalgamation of the previous three console games. With the exception of motion controls being removed for ports to other consoles, the core has virtually stayed the same throughout the series. Travis strikes his extra terrestrial foes with light and heavy attack combos, and special attacks through built-up meter or by luck with a slot machine system; stronger special attacks allow your nerd to transform into a stylized mecha after yelling "Henshin!" Then there's the perfect dodge maneuver which, when timed correctly, temporary slows time for getting easy hits in. Also making a return from Travis Strikes Again are death chip skills, abilities-on-cooldown such as a fierce dropkick or throwing enemies via telekinesis.

The vast selection of fighting styles make this sequel the best in terms of combat. This set-up is present in the previous game, Travis Strikes Again, however there's a difference between the two. TSA's problem is that it forces you to slash through countless easy fodder ad nauseam, occasionally giving you a strong opponent; it's not until towards the end when you're consistently bombarded with tough opposition. On the other hand, NMHIII starts pummeling you with genuine challenges once the opening tutorial stage concludes. Here you'll encounter a diverse cast of enemies with unique attack patterns that will easily shatter your health if you take them for granted. It's no Devil May Cry or Bayonetta, but NMHIII is a testament that the series' combat system was never the problem, but instead what was designed around it.

However, this game has its own set of flaws to hassle through. The thing with the "mainline" No More Heroes titles is that they require you to save up enough money to actually access main stages and their boss fights. This is done by participating in side jobs, such as mowing grass or fighting a gang of enemies. In the first game on the Wii, this is all done while navigating across the city of Santa Destroy in the most miserable way imaginable: traveling between seven different spots on the map, at least nine times, just to perform three side jobs and gain entry to a main stage. Guess what makes a return in NMHIII? Not only are you once again required to traverse Santa Destroy, but there's also three additional "cities."

While the concept of traveling near-lifeless, huge areas in a No More Heroes game is once again an unnecessary inclusion, NMHIII is the lesser of the two evils. It attempts to fix a few issues that plagued the first game's city, such as now having multiple save spots instead of just one inside the motel. You still have to drive or walk to a location to start a side job or fight, however you no longer have to first stop by an office to activate these objectives; you can go directly to them. Thankfully, there's also the insertion of a fast travel option that lets you quickly move from one city to the next, as doing this manually every time would have added an extra layer of repetition to the experience. 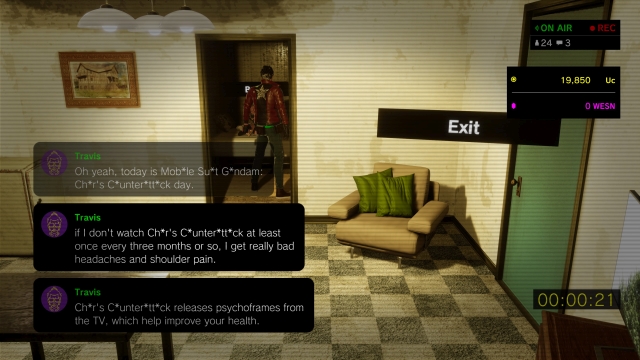 This next issue is difficult to entirely fault the devs on, but it's one that still needs to be addressed. The first three games in the series has a traditional gameplay flow where Travis beats up enemy fodder after enemy fodder along a linear pathway before facing a boss. With the lack of enemy variety in the first two games and most of TSA, this... quickly becomes repetitive and tiring. While NMHIII has a more threatening cast of opponents, the game deals with its flow by "encasing" normal group battles and making them a companion objective for accessing boss fights; so they're now glorified "side jobs" that you have to go to within specified areas in cities. It's... not a great method, but it's not terrible either. Considering how the series has handled typical combat gameplay up to this point, this flawed approach is still bizarrely the best the devs have done.

No More Heroes III is perhaps the most tolerable in the series for having a stable journey from beginning to end. Of course fans will love it regardless, but it's also the most accessible for newcomers peering in. The gameplay in past games just gets in the way, while here it's more like a stomachache instead of full-blown diarrhea that worsens as you get closer to the climax. If you're just a "passerby" looking for one game in the series to play, this is the one to pick. Whether you've known Travis' world for years or coming in blind, you're guaranteed to have a surreal Suda51 ride in terms of how the medium is used with visuals, music, characters, and the plot; you can tell heart was put into these moments. As a famous online influencer often says: welcome to the garden of insanity.

If you enjoyed this No More Heroes III review, you're encouraged to discuss it with the author and with other members of the site's community. If you don't already have an HonestGamers account, you can sign up for one in a snap. Thank you for reading!

© 1998 - 2022 HonestGamers
None of the material contained within this site may be reproduced in any conceivable fashion without permission from the author(s) of said material. This site is not sponsored or endorsed by Nintendo, Sega, Sony, Microsoft, or any other such party. No More Heroes III is a registered trademark of its copyright holder. This site makes no claim to No More Heroes III, its characters, screenshots, artwork, music, or any intellectual property contained within. Opinions expressed on this site do not necessarily represent the opinion of site staff or sponsors. Staff and freelance reviews are typically written based on time spent with a retail review copy or review key for the game that is provided by its publisher.