In 1992, the American 2D fighting game Mortal Kombat was unleashed unto the world, delivering exaggerated, comical violence with the use of real-life actors digitized as playable characters. What followed in its wake was an array of games, mostly fighting titles, that tried mimicking its style and essence throughout the mid-1990s. Not surprisingly, a lot of these imitators where also made by US developers, however some Japanese teams also got into the act. Particularly, Scarab created Battle Monsters for the Sega Saturn, a 1995 fighting game that lives up to its name. Specifically, 12 fighters from 12 species in the netherworld have gathered for a tournament that commences every thousand years, with the winner being crowned ruler.

In writing, a horror-themed fighting game featuring creatures, mystical beings, and demons sounds pretty cool, and if you look at the drawing interpretations of each fighter, you have quite the threatening lineup; there's Fangore, a bulky skeleton creature with a skull shield and a full head of red hair; Naga frights with her giant snake and Medusa-inspired design; Skythe, a humanoid bird demon, menaces with his musclebound posture. But... then you see the in-game, digitized renditions of these characters; Fangore is now just an action figure due to it likely being an actual model; Naga now appears to be having a bad hair day while wearing a sleeveless blue raincoat; Skythe now looks like a shirtless sweaty man wearing a bird mask on his way to a cosplay convention. 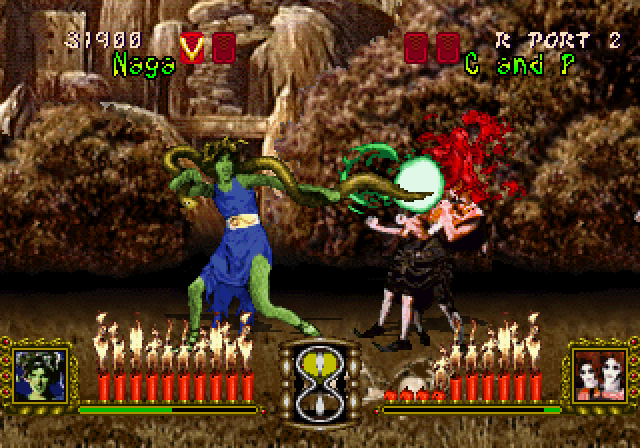 Despite Mortal Kombat pulling it off, having digitized characters in video games was a niche concept during that era. For some, the "realistic" element, especially when done badly, just makes everything look gaudy. Having said that, regardless of your preference concerning digital people in games, Battle Monsters is an eyesore. Everyone looks like they returned from a local costume store in preparation for a Halloween party. It's amazing how a simple "artistic" change in visuals can turn a neat idea into something so unintentionally goofy.

Backgrounds on the other hand have nice settings, like a shrine where fights transpire in the presence of a huge detailed statue or another where battles occur in front of a supposedly dead giant demon. However, such stages are immediately downplayed by a combination of low quality visuals and blurry objects. This is most likely due to the fact that the devs used an annoying effect where the camera abruptly zooms in and out depending on how close the characters are. So... every two to three seconds. You will grimace at the backgrounds being too pixelated at a distance and foggy up close; it's debatable whether the latter was intentional in an attempt to copy a lens effect often seen in photos and movies, but that doesn't change the fact that it makes the game look ugly.

"But graphics aren't everything," yes? Surely a Japanese fighting game from the mid-1990s has some semblance of entertainment value to it? Battle Monsters actually has a surprising number of concepts and mechanics incorporated into its 1-on-1 fighting core. Along with the usual array of special attacks that must be activated with motion and button combinations, the game has dedicated dash triggers and a button that, if a stage has them, allows your character to jump on a higher platform. The game even has chain combos, specifically ones where you can juggle opponents. Fiendish fighters quickly performing attacks, while speedily dashing or jumping between platforms, makes Battle Monsters sound like a game that's all over the place. It is, but likely not in the way you're thinking of.

For instance, special attacks are oftentimes questionable and impractical. Take a look at the cosplayer brooding Skythe's move list; his main projectile attack only shoots upward forward. Okay, fine, that's good against opponents jumping in. But he also has an alternative projectile attack which, when activated, simultaneously launches projectiles upward forward and downward forward. This move would make more sense in an action platformer game with dozens of enemies on screen. Bizarrely, most of his "specials" consist of variations of normal punches and kicks. Why so? Perhaps because the game only has one punch and one kick button. Battle Monsters is a Sega Saturn exclusive, so this choice makes even less sense considering the six available face buttons on the Saturn controller. 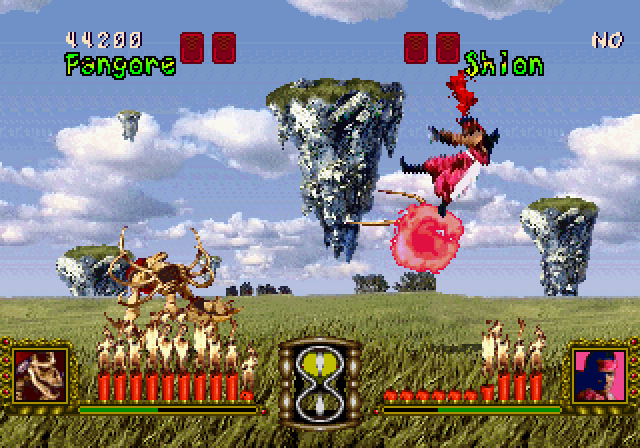 What takes up the remaining default buttons? The C button is used for "appeal," which helps build meter for a super attack. It's way more trouble than it's worth since the meter acts like it has a mind of its own, making it irritating to activate in the heat of battle. The devs decided that X, Y, and Z make you jump on and off platforms, and since there are more platform buttons than attack buttons, it must be an awesome concept, right? Most platforms are only big enough to support one character, with the opposing player easily being knocked off if they try joining in. Platforms can be destroyed in some stages, but all others stay sturdy, allowing characters, especially ones with projectiles, to have a big "tactical" advantage. It's cheap, makes battles annoying, and it's obvious the devs just put them in because it sounded cool when it was pitched.

But say you genuinely try taking fights seriously in spite of these annoyances. What's your reward? A ridiculously broken game. If you've managed to get good at combos and dashing, a fight can begin and end in the span of four seconds if you successfully land the first hit. Very fun... Battle Monsters had a great opportunity to be a silly little fun game. Instead it tried being some type of grand fighting game with numerous concepts and gimmicks that the development team didn't give much thought towards; a "sounds good on paper" scenario. Here's the good news: the Sega Saturn is notorious for having a large library of quality fighting games, so you should never have to experience this unless you're masochistic. Can you imagine, in an alternative reality, the Sega Saturn having a tiny collection of fighting games and this being one of them?

If you enjoyed this Battle Monsters review, you're encouraged to discuss it with the author and with other members of the site's community. If you don't already have an HonestGamers account, you can sign up for one in a snap. Thank you for reading!

© 1998 - 2022 HonestGamers
None of the material contained within this site may be reproduced in any conceivable fashion without permission from the author(s) of said material. This site is not sponsored or endorsed by Nintendo, Sega, Sony, Microsoft, or any other such party. Battle Monsters is a registered trademark of its copyright holder. This site makes no claim to Battle Monsters, its characters, screenshots, artwork, music, or any intellectual property contained within. Opinions expressed on this site do not necessarily represent the opinion of site staff or sponsors. Staff and freelance reviews are typically written based on time spent with a retail review copy or review key for the game that is provided by its publisher.