The original Puzzle Bobble, known as Bust-A-Move when first published in the US, is a Bubble Bobble spin-off where the Bubble Dragons perform tile-matching maneuvers to make three bubbles of the same color disappear. The main objective is to clear all bubbles within contained fields in order to advance, doing so until you either lose or complete every stage. Similar to Tetris? Not exactly. Bust-A-Move puts an interesting twist on the formula where, instead of dropping bricks, Tetrominos, or some other variation down to a surface below, here you must shoot bubbles of differing colors upward to a ceiling of bubble structures. Sounds easy, but with any well-made puzzle game, completing such a task takes actual thought and effort.

Ceiling bubbles are connected together and usually lined in abstract positions, made so that you can't simply point and fire at a specific bubble without hassle. One such example involves a mixed collection of bubbles in the shape of a giant arrow pointing down at your dragon. You can attempt to piecemeal this structure by "chiseling" its middle, or you can go for the final top bubble that everything else is latching to. But to perform such a feat, you need to first ricochet your shot off a wall and hit said bubble... without messing up. Accomplishing this will quickly end the stage, but failing will likely result in doom if you panic with subsequent shots. You can't take your time either: each potential shot is on a brief time limit, not to mention the ceiling slowly makes its way down the longer it takes to complete a stage. 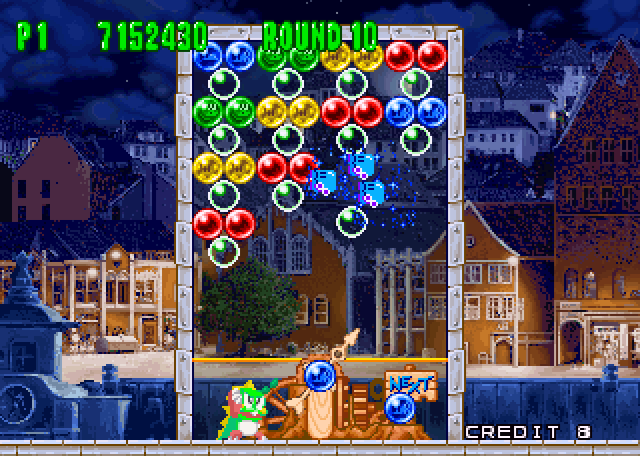 Bust-A-Move 2 carries over this concept and these aspects into a bigger game, expanding on them while also including new features. In the first, for instance, completion is always linear and you beat the same stages in every session. You know what you're getting every time. However, the second game takes the Darius approach where, after you finish a batch of stages, you can then choose between two paths on a big branching map. This change ensures you'll have a different experience with every playthrough. The Sega Saturn port even has an "X2" version with new levels as a separate mode, so there's a lot going on here.

While bubble ceiling structures follow in the vein of its predecessor, there's extra touches that make the overall trek more challenging. Perhaps the biggest of these are transparent bubbles which can't be destroyed, meaning you have to get the bubbles above to remove them from the field. Other obstacles and objects include wooden blocks which prevent you from ricocheting shots, a flashy orb that make all specific bubbles disappear when touched, and, more rarely, a cannonball that destroys everything in its path when launched. The devs have gleefully designed certain stages, usually latter ones, so that most of these hazards give you quite a workout. In some cases you'll have rows of clear bubbles to topple, and in others you have to carefully ricochet paths filled with wooden blocks; you really have to make every shot count in these instances. 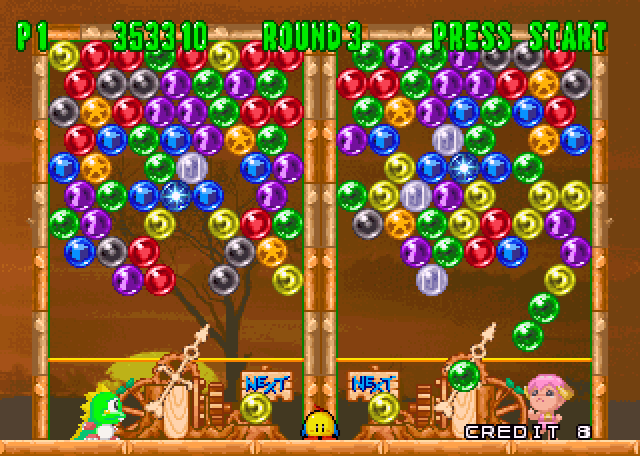 If playing solo isn't your thing or you want to try something different, there's the returning competitive two-player mode. Taking after Puyo Puyo's rule of "stacking," bubbles you've popped will get tossed to your opponent and vice versa; the more bubbles destroyed at once, the bigger the stack becomes. If you and whoever you're playing with are decent at the game, it can get chaotic as stacking occurs mere seconds into a match given how there's a group of bubbles immediately available. But if you can't find a friend, the devs have included AI characters to compete with, something that wasn't originally in the first arcade game, but became available in its SNES and Game Gear ports. The AI is actually competent in that it teaches you to do things very quickly or else you quickly suffer from defeat.

But the most unique thing about the Sega Saturn version of the game is the introduction of an edit mode. Not only are you allowed to craft stages, a single bubble at a time, but they even gave you the option to make several stages and plant them in their own multi-path map. The developers literally gave you the choice to make your own version of Bust-A-Move 2. Now what makes this port even more intriguing is the fact that, at the time of its release, this was the only console version that had such an option. Though in one of the more stranger twists, the edit mode would not make its return in Bust-A-Move 3 for the Saturn... but it ended up being included in the PlayStation version. Companies are super weird sometimes.

Thankfully, this very same company decided to retain the original visuals and sound design for this port from the Japanese arcade version. For some bizarre reason the US arcade release, titled Bust-A-Move Again, made trivial modifications that removed nearly everything that was "cute." Whether it's whimsical music or the protagonists of the series, they were replaced with action music drivel, dramatic explosion effects when bubbles disappear, and... dismembered hands. But the cutesy atmosphere is part of what gives the Puzzle Bobble series its charm, so to take that away is just ridiculous. 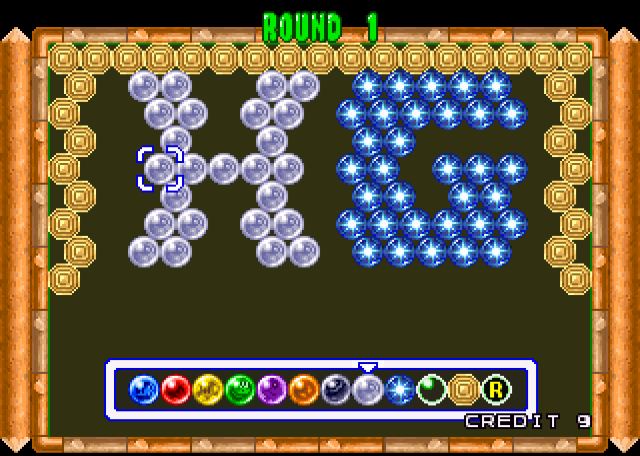 Bust-A-Move 2 in particular nails the mood. The soundtrack is a well-made piece of catchy music, which easily could have ended up sounding like elevator music if given to the wrong hands; considering it was crafted by Taito's sound team of Zuntata, popular for their eccentric Darius beats, it's not surprising they made yet another memorable ost. This, along with the enthusiastic cutesy atmosphere, addicting gameplay, enhancements over the first title, and even the inclusion of an edit mode, makes this the sequel that subsequent games have been trying to copy for decades. If you're looking to play or build a Sega Saturn library, this is a must; you can't go wrong with a solid game of bubble bustin' puzzle action.

If you enjoyed this Bust-A-Move 2: Arcade Edition review, you're encouraged to discuss it with the author and with other members of the site's community. If you don't already have an HonestGamers account, you can sign up for one in a snap. Thank you for reading!

© 1998 - 2022 HonestGamers
None of the material contained within this site may be reproduced in any conceivable fashion without permission from the author(s) of said material. This site is not sponsored or endorsed by Nintendo, Sega, Sony, Microsoft, or any other such party. Bust-A-Move 2: Arcade Edition is a registered trademark of its copyright holder. This site makes no claim to Bust-A-Move 2: Arcade Edition, its characters, screenshots, artwork, music, or any intellectual property contained within. Opinions expressed on this site do not necessarily represent the opinion of site staff or sponsors. Staff and freelance reviews are typically written based on time spent with a retail review copy or review key for the game that is provided by its publisher.