Bomberman titles used to be as common as Mega Man sequels or games with Mario in their name. They appeared in the arcade, on portables, PC, and was guaranteed to appear on every console that was created in Japan. Sega home systems had their share, with the Genesis and the Dreamcast receiving a lone Bomberman title to their name, both interestingly never getting Japanese releases despite being Japanese-developed. On the opposite spectrum, the Sega Saturn had not one but three games released during its lifecycle, actually came out in Japan, and, even more shocking, one of those managed a US release under Bernie "Burning Bridges" Stolar's tenure at Sega. That game is Saturn Bomberman, which continues the gameplay tradition carried out by its predecessors.

If you're unaware of said tradition, it involves the inclusion of two modes, the "story" and battle modes. Each one uses a character who has the ability to plant bombs that explode seconds after being dropped. This character is typically placed in arena-esque environments with blocks barricading paths, which can be destroyed using bombs. In the case of story mode, you must navigate through five worlds, each usually containing eight stages and one boss fight, where you can only exit each stage if you destroy every capsule within the arena. Along with a succession of blocks obstructing your goal, there's also enemies wandering the battlefield, the latter of which can easily kill you with a single touch. 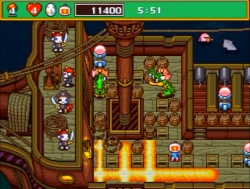 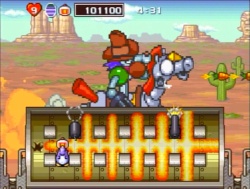 But you have an abundance of items that can be uncovered, hiding in random blocks throughout each stage. Some of these are series staples, such as being able to plant multiple bombs or making the blast radius larger, turning your character into a powerhouse as long as you don't die; Bomberman titles use the shoot'em up rule of removing every item after losing a life, so be careful with your placements! Other helpful items include walking through bombs, temporary invincibility, gaining a protective hit, ability to remote detonate your bombs, and dinosaurs that can be ridden. On top of all that, there's even an option to couch co-op with a buddy if desired.

However, most of these are on par with most Bomberman games, to the point that Saturn Bomberman's story mode doesn't do anything impressive from a gameplay standpoint. Sure, each world introduces new environments and enemies, such as one opponent that punches a bomb away or another that swallows bombs if close, but they're not exactly groundbreaking ideas; not to mention enemies wander each stage at a casual pace, though that has more to do with stages being cramped enough as it is. If anything, story mode's strongest suit is from a graphical perspective, as Hudson Soft takes advantage of the Saturn's 2D capabilities to produce a colorful, crisp, and cartoonish Bomberman title. Whether it be sakura tree petals filling the sky in Samurai world or a huge, animated locomotive passing through a stage in Cowboy world, the devs didn't skimp on the details.

Now if story mode's easy, repetitive nature isn't for you, there's also the inclusion of a Master mode. You'll guide a Bomberman, indiscreetly wearing an orange gi based on a certain monkey, as he climbs a tower featuring 20 stages. Here, each stage is a single, non-scrolling arena and the sole objective is to destroy every enemy. Some may not like this since it's seen simply as a time attack; the faster you complete a stage, the more points you receive for the final ranking. But if you give it an actual chance, Master mode is shockingly in-depth with its structuring. Enemy placement and their starting patterns never change, and that goes for items hiding in blocks. This is vital info because you can actually form a plan to complete each stage quickly, destroying certain blocks or enemies at very specific moments. 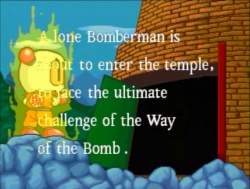 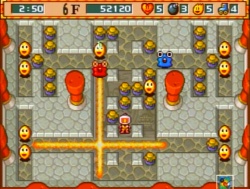 Going to such lengths might sound unnecessary at first, but stages eventually turn into actual mazes. That's where the mode's genius structuring starts shining through. For example, one stage has a zig-zag arena filled to the brim with blocks. This leaves you with very little movement at your starting position and gives the impression that it'll take forever to finish. However, the very first block you destroy has a power glove, an item that allows you to pick up bombs and throw them. In story mode, the item comes off as a throwaway thought. But in this instance, you can use it to finish the stage quicker by tossing them off screen so it loops to the opposite corner. You're even expected to make bombs bounce off enemies so that they land into the adjacent hallway. If you're really flexible, you can do this while simultaneously planting bombs in your immediate surroundings.

Master mode is essentially a puzzle game, and that's why it's more entertaining and addicting to play when compared to story mode. The devs had to put considerable thought into the design for it to be engaging, making it the most surprising aspect of Saturn Bomberman. But even though this single-player mode exceeds expectations, there's one other important mode that most people buy Bomberman games for: battle mode.

Whereas story mode feels pedestrian by retreading the simplistic repetitive structure of its predecessors, battle mode thrives on what it's been doing for years. All you really need is a couple buddies placed in a square arena, battling one another with bombs until a single soul is standing. Of course placing one bomb at a time will drag things out, so items seen in other modes are featured, with the exception of overpowered stuff like the remote control. Rules can also be fiddled with, such as number of rounds, time limit, and even having dead players still participate by throwing bombs from the outside. So if you're feeling especially fiendish, you can have four players attempt a victory within one minute before the walls start closing in, all while four deceased players throw bombs from the outer walls. It's this type of calamity that makes battle mode an endearing favorite. 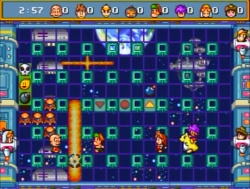 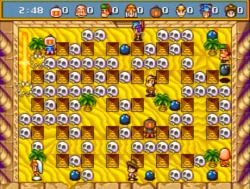 You also have a selection of eight arenas to pick from, each with their own unique features to make fights more hectic. One such example is a space colony where, with the help of three buttons placed in the center, everyone's default walking speed slows down or speeds up; this really messes with the timing of dodging bomb explosions. There's also one location taking place in a jungle that houses an exclusive mine item. This is perhaps the toughest arena due to how hard it is to quickly counter-dodge such an item with eight-plus characters on screen. Eight-plus? Saturn Bomberman, with the help of two multiplayer adapters, can allow up to ten total couch players in a battle if you can find them. Though, only the default green-floored plain arena can host the max amount, likely because it's easier to see everyone on the map in its zoomed-out state.

Multiplayer madness doesn't end there as the game has one more trick up its sleeve: online gaming. With the US NetLink modem or its Japanese equivalent, two players or two teams of two can duke it out over the Internet. Keep in mind that this was during the mid 1990s when online gaming, on consoles, was very niche and uncommon, so the idea of playing a Bomberman game with a bunch of unknowns was an intriguing concept. Unfortunately, at least in the US, the game came out towards the end of 1997, where the Saturn took one final beating from its competitors before "bowing out," so it was a short-lived experience. But here's where things get interesting. Because the modem uses a direct dial method for setting up matches, you can still play Saturn Bomberman online to this day, given you have the modem, the proper gadgets, a little bit of troubleshooting, and willing participants. 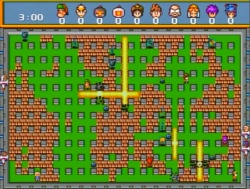 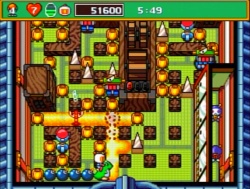 Hudson Soft really went out of their way with this version of Bomberman, making it one of the more robust entries in the series. That might sound like an odd statement for some, considering the game essentially adds "bits and pieces" to the core. If your template is solid to begin with and beloved by many, the best thing you can do in some instances is include neat features, in turn expanding and shining a bright spotlight on such a template. Story mode is perhaps the weakest link of the three modes with its meddling repetitive design, but even that has a semblance of production values with visuals, voice-acting, and even hand-animated cutscenes. But there's usually one reason you choose to play a Bomberman title: to have a destructive good time with your friends. Saturn Bomberman definitely hits that mark.

If you enjoyed this Saturn Bomberman review, you're encouraged to discuss it with the author and with other members of the site's community. If you don't already have an HonestGamers account, you can sign up for one in a snap. Thank you for reading!

© 1998 - 2022 HonestGamers
None of the material contained within this site may be reproduced in any conceivable fashion without permission from the author(s) of said material. This site is not sponsored or endorsed by Nintendo, Sega, Sony, Microsoft, or any other such party. Saturn Bomberman is a registered trademark of its copyright holder. This site makes no claim to Saturn Bomberman, its characters, screenshots, artwork, music, or any intellectual property contained within. Opinions expressed on this site do not necessarily represent the opinion of site staff or sponsors. Staff and freelance reviews are typically written based on time spent with a retail review copy or review key for the game that is provided by its publisher.