The Medium is known as "that game with the split screen gimmick," at least to those who never played but seen glimpses.

To put things into perspective, the story revolves around Marianne, a medium who can interact with spirits and the spirit realm. This is demonstrated during segments where, as Marianne is wandering the realm of the living through abandoned structures and forests, she will experience sudden headaches. In turn, this propels Marianne into the spirit realm while also co-existing in the living realm, thus the split screen gimmick. Here you'll navigate two versions of her, at the same time, in what can best be described as a "next-gen" rendition of Spot the Difference; you must solve puzzles by finding clues and objects in the environments, with important things usually tucked away in one realm. When described in that manner, it sounds... "interesting," to say the least.

The shocking thing is that, once you actually play it, you realize the split screen segments are not that common. Considering the devs, Bloober Team, have stated that the game has been on hiatus since 2012, due to technology not being powerful enough to pull off their desired gimmick, this is a surprise in itself. The concept shows up periodically in two instances: during cinematic cutscenes and Spot the Difference gameplay portions. The rest of The Medium plays out like a usual 3D adventure title that has a mixture of fixed camera angles and third-person viewpoints for dramatic effect, similar to oldschool Silent Hill and Resident Evil titles. This is an intentional nod, as the devs drew particular inspiration from Silent Hill with abstract settings and unsettling atmosphere; the team even went out of their way to hire the original Silent Hill composer, Akira Yamaoka. 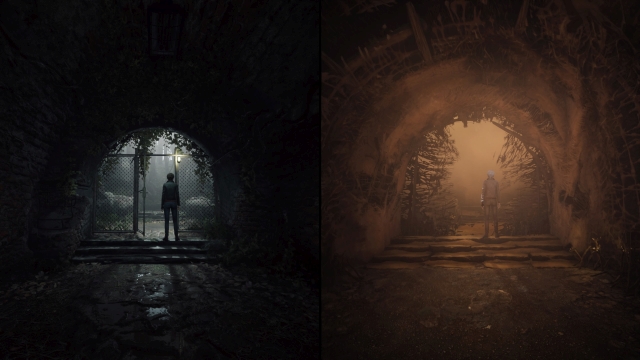 With its leading gimmick being particularly lacking in presence, The Medium still sounds like a potential engaging playthrough. It's not. In fact, completing the game will likely be one of the most dreadful experiences you'll have for a laundry list of reasons.

The first casualty is the split screen gimmick. The only real thing it has going on is the visual presentation, essentially a tech demo to show off the power of the latest hardware it's running on. The actual gameplay design is restricted, as you're basically locked into a specific area and with a particular method of gameplay. If this was done in a smart way, fine, but you're literally walking between one, two, or three small rooms and waiting for button prompts to appear so you can grab an item. You then walk back to the obvious spot it's supposed to be placed in and do this two or three more times until the next area opens up. This happens in nearly every split screen segment til the very end of the game.

The team doesn't make any effort in diverting from this flow, except for one moment that comes off so clever that it was likely included by accident. The puzzle involves time manipulation and it's such an intriguing use of the split screen that you're expecting other unique scenarios going forward. They never come and worse, this specific puzzle occurs near the beginning, so the dry spell starts early. Instead, they're content with Spot the Difference "puzzles" and out-of-body moments where your spirit form can temporarily walk away from your living form in order to grab an item previously inaccessible; the latter is literally just a timed-variation of the former.

Also, the problem with these segments being "locked in" is the fact that there's zero tension or anxiety when walking around. Marianne is constantly roaming ominous, dreary environments in the living realm, and abstract surroundings and structures made of human figures in the spirit realm, yet not once do you feel in danger of being attacked or fear of the unknown. Does that mean the non-split screen portions have a lot more going with them? Regrettably no. Every other gameplay aspect is also its own section and locked in, preventing other portions to mix or blend with one another. That's the biggest tragedy of The Medium: everything becomes predictable and boring after you've barely played for two hours. 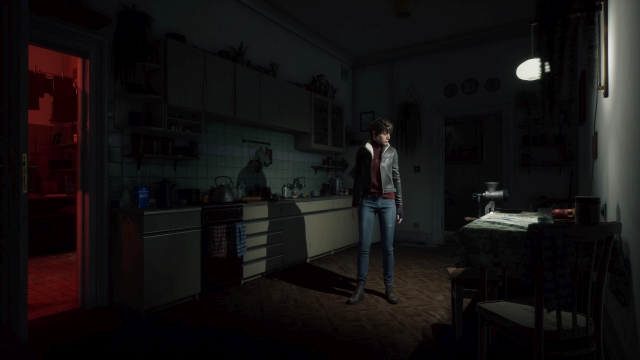 Take for instance the fact that you can get hurt and die in this game. You think that dynamic would add a semblance of weight to your actions, but it doesn't. Most of these situations involve a monster that stalks and hunts you throughout the story, and one of two gameplay sequences will occur. The first are segments where you're running away from the beast through long winding corridors; sometimes you'll turn left, sometimes you'll turn right, but ultimately you'll just press the analog stick forward. The second instance involves stealth! D... don't get too excited, because it's bad. The monster is basically slowly walking around in circles or figure-eight pathways in a small environment, so the solution is to literally wait, watch his patterns, and just ignore him as you walk by. There's zero stakes in either situation, because you'll just respawn at the start of each brief scenario if you fail.

With every new mechanic or element introduced, The Medium does its unintentional best to be uninspiring until you're left with a product that's so cluttered with staleness that it becomes a hassle to play in every new session. Like, there's an aspect in the game where you can use mirrors to warp between the living and the spirit realms; this could've been a neat feature, but it's wasted. In the living realm you'll reach a dead end because of a pit, but a few feet back there's a mirror. So this gives the devs the opportunity to warp into a completely different environment with new paths and scenery? Nope, you just go down the same path, except now there's enough floor space to hug a wall. And that's it. Great. How creative. 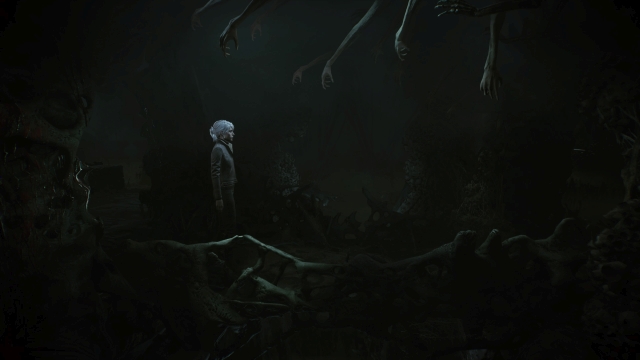 There's also a recurring method the devs love to use: circling the environment in order to complete puzzles. For example, you'll walk past an indoor pool area, through the showers, a locker room, and down a long corridor until you reach a dead end. Then, for "story reasons," you have to follow a trail, which then... leads you back to the pool area, through the showers, and into the locker room so you can grab an item that'll move you beyond the corridor. The devs do stuff like this for the entire playthrough. They're constantly coming up with reasons to waste your time, such as making you pick one of two walking paths, only for both to lead to the same area without incident. Another example requires you to put a specific item on a chair to advance. The devs handle this scene by intentionally presenting you one wrong item at a time, until they finally decide to give you the correct one.

It gets so bad that you'll likely succumb to speed-reading story-related text that has audio dialogue attached, not that the dialogue is great to begin with. Marianne is constantly alone, yet that doesn't prevent her from persistently talking out loud to herself. Despite the game's overwhelming oppressive and foreboding atmosphere, Marianne kills the mood by making comments about everything you come across. It's like the devs are telling you how to feel about every moment through her. There are even times when she makes really awful jokes, like right after bolt cutters are used on a chain and she says, "It kinda sounds like a spy name. Cutters. Bolt Cutters." The devs probably thought this awkwardness would make her endearing, but it's the complete opposite...

If you're genuinely attempting to complete The Medium, then it gets to a point where you're literally forcing Marianne to run through environments as fast as possible when given the option. If this were any other adventure game with elements of survival or horror, this would be a ridiculous thing to do, but none of that matters here because of the design's predictability. Unfortunately, mindlessly running around and letting the world do its thing turns the game into something it probably wasn't intended to be: a walking simulator. But walking simulators, good ones, engross you into their worlds and story. That doesn't happen here. 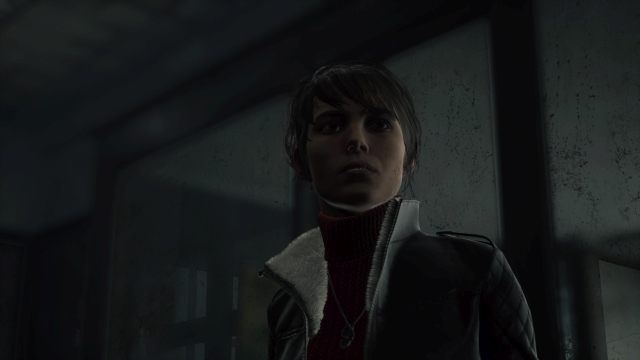 The thing with The Medium's story is that it's presented as a mystery. Marianne got medium powers at a very early age, but she can't remember how or when she got them. She gets an ominous phone call from a person claiming to know her powers and offers to explain everything if she shows up at a certain place. From there, the majority of the abysmal gameplay portions occur and the plot slowly unravels through a series of notes, written letters, and "flashback" dialogue with the help of your medium abilities. Now, if the gameplay is constructed in such a banal manner, how do you think the story is like? Without giving anything away, it just seems like they took a simple plot and stretched out the "enigma" element til the climax; when you get the whole picture, you don't necessarily "feel" anything due to the lackluster way it was exhibited.

Then the actual ending transpires and you feel absolutely insulted. The story "builds up" to this moment, even though the game reaches this point abruptly and unceremoniously, and just when the cutscene reaches a dramatic peak... it cuts to black and you're presented with end credits. The Medium concludes with one of the most annoying ambiguous endings committed to a video game because someone wanted the moment to be "poignant." After everything you've been through, especially gameplay-wise, the developers had the audacity to "leave it up to the player's interpretation." To make matters worse, once the credits finish, you're left with a sequel hook cutscene.

The Medium should be known as "that game you shouldn't play."

If you enjoyed this The Medium review, you're encouraged to discuss it with the author and with other members of the site's community. If you don't already have an HonestGamers account, you can sign up for one in a snap. Thank you for reading!

© 1998 - 2022 HonestGamers
None of the material contained within this site may be reproduced in any conceivable fashion without permission from the author(s) of said material. This site is not sponsored or endorsed by Nintendo, Sega, Sony, Microsoft, or any other such party. The Medium is a registered trademark of its copyright holder. This site makes no claim to The Medium, its characters, screenshots, artwork, music, or any intellectual property contained within. Opinions expressed on this site do not necessarily represent the opinion of site staff or sponsors. Staff and freelance reviews are typically written based on time spent with a retail review copy or review key for the game that is provided by its publisher.