Please excuse me I havent acquired a proper appreciation for this game without some form of social engagement. Whelp, thats what getting married and playing with your significant other will do. You do not have to get married for that, but it was beneficial for me. Case in point: Mario Kart has always been about multiplayer fun and this-possibly seminal-is Nintendos best version in the series so far.

What we have here is the most well-rounded mixture of graphics, physics, content and player options to date. There is enough here to keep veterans interested while their impatient kids chomp at the bit to choose their favorite character from amongst a roster of 36 in total, 14 unlockable by coins you collect whilst you play. Its a simple approach that rewards you for playing without putting superior performance behind any kind of in-game currency wall. 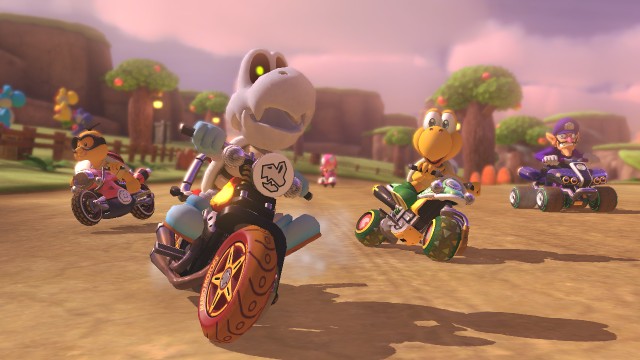 This was something Karen and I came to appreciate as we worked our way through the various options in battle mode. Her first choice wasnt racing, which requires mastery newbies arent likely to have at the outset, but battle mode provides enough to keep players interested. Finding your personal mascot-or avatar if you like-is where you start before you get into any kart action and there are plenty to choose from. I started with Link and settled on Shy Guy, who sports nine different colours, whereas my wife began with someone she knew-Larry-and finally opted to have Lakitu as her regular. The ability to start from a point of familiarity is an important part of the Mario Kart experience.

The body of your kart is the next crucial consideration, though that may not be apparent initially. Nintendo knows this and has put the indicators within reach of a button should you decide you need them. Otherwise you can navigate by instinct and experience. If you want to manage the performance metrics of your machine, by all means, smash that plus button and seek the perfect tuning to meet your expectation. It may mean that you will have to back out to choose a character of suitable weight to get the bars where you want them to be. That said, when you have a default loadout, Mario Kart 8 Deluxe makes set up easy by only having four total options to nail down.

Body types are many and varied, often paying homage to franchises and one brand you may find a strange addition as it was DLC in the days of yore when this game was released for the Wii U. As this is the Deluxe version, we get that DLC for the price of admission. I like that. Yes, there is new DLC, but so far it is limited to new tracks and I expect it will remain that way. Im content that you get the DLC with your Nintendo Online + Expansion Pack, as long as I'm subscribing, anyway. 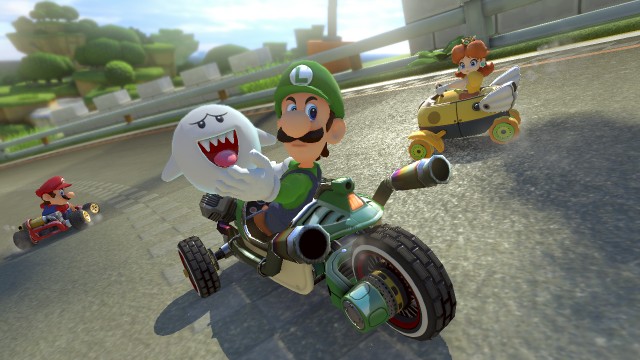 While you are pondering whether a motorized teddy bear, submarine missile, shoe or many other well designed and modeled karts suit your taste, take a moment to decide if you like honkin big tires, little ones or something strange, like carved wood. They look fantastic and will never leave you stranded without a tire iron! The fourth and final performance changing option was introduced in Mario Kart 7: a glider. They are equally charming, though not as varied as the others. Nor do they meddle with your performance much. Apart from enabling the gliding mechanic, they are almost an oversight. They are fun, though.

Now, as choice is our wheelhouse, you will need to select from a range of options shared between the amount of players who are going to be involved. Grand Prix, which pits you against 12 other racers comprising cups, which are four courses in succession. There are twelve cups to choose from, though you will need to achieve a 1st place in enough of these to lock six of them. Time Trials, meanwhile, lets you choose from your unlocked tracks to race against your own saved records or against times downloaded from Nintendos network of other players. VS Race is you against the computer with a host of configurable options include whether there should be teams, if you want items or not, vehicle types and others, like how many rounds there should be, and so forth.

Battle mode borrows from the above option list but adds a time limit, anywhere from one to five minutes, in single minute increments. You will find that three minutes will be enough most of the time, but one minute rushes can be pretty exciting, whereas five minute rounds feel like pure endurance matches that can get pretty hairy. Depending on your play style and skill, it might give you the chance to get that flanking victory in a pitched round. Pick what suits you and experiment! You will certainly want to once you are accustomed to how the computer plays. 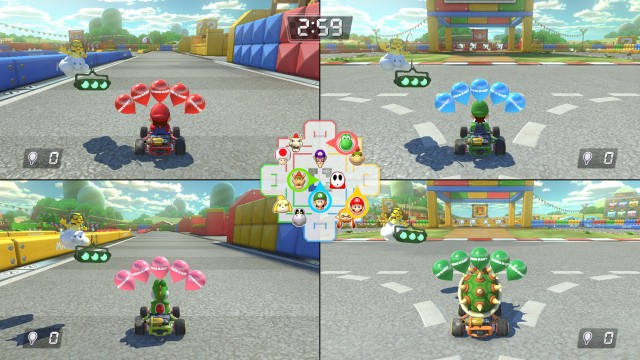 There are a couple of gripes here that I dont expect Nintendo to address, but I feel they would make the second player feel more at home: Remember their settings! Numerous players are playing solo and online and not everyone wants to buy two copies of this title. Also, more granular options for battle mode. For example: It would be nice to turn off friendly fire in every battle mode. Friendly fire isnt exciting, it is annoying, and only Bob-omb Blast lacks it. Were not sure why this is.

Moving on, there are few games that are so accessible, which means letting in players of no-to-master levels of skill. Its no mean feat achieved by this bestselling franchise. Online racing is beyond my skill level and time commitments in order for me to be competitive, but it appears to be thriving and enjoyable even for a casual player like myself.

Karen and I enjoy battle mode most of all and would love to have access to more than eight tracks. Make no mistake, they are good, but...there are only eight of them. Battle types seem to fit your mood and can be played in two teams or individually: Bom-omb Blast for no frills balloon busting fun that sees you tossing or dropping coloured bombs. When your initial five bombs are destroyed, you get sidelined and are then reintroduced to the fray with your counter of hits landed reduced by half. The team or racer with the highest count takes home first place. When you know the course well, this can be a pretty easy way to relax.

The other modes arent our first choice but are equally engaging: Renegade Roundup is your classic copsnrobbers and is played in mandatory teams mode. The renegades flee from the...uh...rounderupers? Anyway, they-or you-have a piranha plant affixed to your kart, which weighs you down a little. With this, you chase and capture the renegades, who are stuffed in floating cages in fixed positions on each map. The other renegades can free them if they can avoid being caught long enough to hit the big bright button underneath. Shine Thief has a similar premise but only one aim: Keep the shine for 30 seconds longer than anyone else can. The trick is that the shine weighs you down significantly and the action can get pretty hectic with everyone tossing projectiles everywhere. 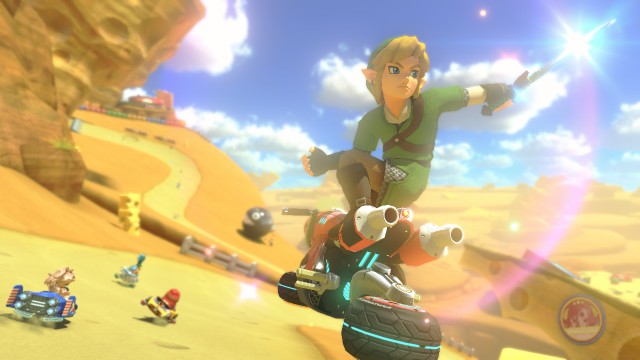 The last mode, our favourite, is Coin Runners. You race around collecting coins on the map. The catch is that those coins are visible over your head to other racers. They will try to hit you and collect the coins that get knocked out of you. Youll drop approximately 40% of what you are carrying to a maximum of six coins, I believe. The wiki knows for sure. This mode is a great way to learn the maps, the karts and earn coins toward unlockable parts for karts. If you want to get them all there are 5000 in total, so you will be busy for a while.

In a nutshell, if Mario anything and Kart something is your jam-or you have kids who are into this stuff-seriously, get it. The hype is real: Mario Kart 8 Deluxe is a blast.

If you enjoyed this Mario Kart 8 Deluxe review, you're encouraged to discuss it with the author and with other members of the site's community. If you don't already have an HonestGamers account, you can sign up for one in a snap. Thank you for reading!

© 1998 - 2022 HonestGamers
None of the material contained within this site may be reproduced in any conceivable fashion without permission from the author(s) of said material. This site is not sponsored or endorsed by Nintendo, Sega, Sony, Microsoft, or any other such party. Mario Kart 8 Deluxe is a registered trademark of its copyright holder. This site makes no claim to Mario Kart 8 Deluxe, its characters, screenshots, artwork, music, or any intellectual property contained within. Opinions expressed on this site do not necessarily represent the opinion of site staff or sponsors. Staff and freelance reviews are typically written based on time spent with a retail review copy or review key for the game that is provided by its publisher.