Armed soldiers rushing from the left. Attack helicopters flying in from right. Bulky turrets emerging from the ground. Their target: you! Were you caught sneaking into a fortified air base? Of course not; you chose to go in guns blazin' all by your lonesome self. Because you're the titular Dynamite Duke: an arcade video game protagonist typical of the era, prone to wiping out armies with little to no effort. Ported by Hertz for the Sega Genesis, the original arcade version was created by Seibu Kaihatsu, serving as a spiritual successor to 1988's Dead Angle due to both using the Cabal-style blueprint for their action sequences. 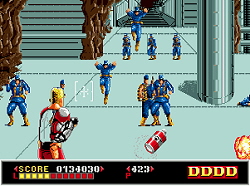 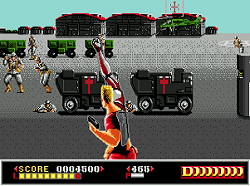 This template regulates your character, in a third-person perspective, to the foreground while he must shoot hordes of enemies popping up within fixed or scrolling backdrops. Your only method of movement when dodging bullets? Quickly strafing left and right. Adding to the supposed restrictions is how your character and cursor movements, both independent from one another, are singularly controlled by the d-pad. Rounding off the control scheme is the fact that whenever you fire your default gun, your cursor is still in play, but your character comes to a complete stop. This all sounds awkward, especially if you're going into the game unaware of its control set-up, but it's something you easily get the hang of after a stage or so. It's not as ridiculous as, say for instance, hitting the start button to switch between punches and kicks in the Street Fighter II port.

Unbelievably, this game, where you control a one-man wrecking machine that can destroy machines of war with so few bullets, is a more grounded version of Dead Angle, a game about shooting mobsters. With Dead Angle, your protagonist is literally a yellow outline of a human which, with suspension of disbelief, can levitate in order to shoot gangsters standing on a second floor balcony. Duke, on the other hand, is an actual figure on screen, with the exception of his torso being transparent in case an enemy stands directly in front of him. He doesn't have the "power" of levitation either, instead that's switched out for the ability to duck, which can be performed while strafing. Once you're used to Duke's movements, weaving becomes a vital tactic, dodging bullets like you're the chosen one.

Sadly, the actual action itself is severely lacking. Granted, basic action titles don't necessarily need much to get a player going, but it still needs stuff like engagement and variety. Perhaps the most underutilized aspect of the game is your fist attack button, which has zero functionality outside boss battles. And you know those soldiers, helicopters, turrets, and APCs in the first level? That's essentially 99% of the game. They literally ran out of ideas and repeat the first level's flow throughout, albeit with a little bit more fodder the more you progress. Two bosses are even reused with palette swaps... in a game with only six brief levels! You can finish Dynamite Duke in about 15 minutes if you're generally decent with action titles. 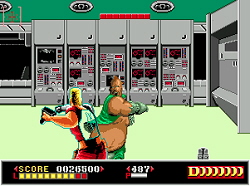 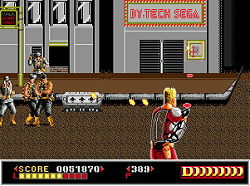 Here's the kicker: the Genesis port cut stuff from the arcade. Melee attacks actually played a bigger role, as soldiers and ninjas would get in your face with knives and swords. There were extra bosses as well, such as an unmasked Char Aznable-looking ninja and a machine with extendable claws. Not to mention there was originally nine levels. All this cut content wouldn't have made the port tremendously better, but you think more material to be a sensible choice for a home conversion. The only reasonable explanation would either be the port team's budget or time constraints. Regardless, the Genesis' Dynamite Duke, while having potential for a simple fun action spree, squanders its set-up for stubborn, poorly-executed repetition.

The arcade original fared no better sales-wise, opting Seibu Kaihatsu to attempt something different with their next project: a shoot 'em up called Raiden.

If you enjoyed this Dynamite Duke review, you're encouraged to discuss it with the author and with other members of the site's community. If you don't already have an HonestGamers account, you can sign up for one in a snap. Thank you for reading!

© 1998 - 2022 HonestGamers
None of the material contained within this site may be reproduced in any conceivable fashion without permission from the author(s) of said material. This site is not sponsored or endorsed by Nintendo, Sega, Sony, Microsoft, or any other such party. Dynamite Duke is a registered trademark of its copyright holder. This site makes no claim to Dynamite Duke, its characters, screenshots, artwork, music, or any intellectual property contained within. Opinions expressed on this site do not necessarily represent the opinion of site staff or sponsors. Staff and freelance reviews are typically written based on time spent with a retail review copy or review key for the game that is provided by its publisher.