The Longest Journey  A Great Point and Click With a Fantasy and Sci-fi World, with Adult Themes and Girl Next Door Heroine That Suffers from Some Plot Holes and Abstruse Puzzles 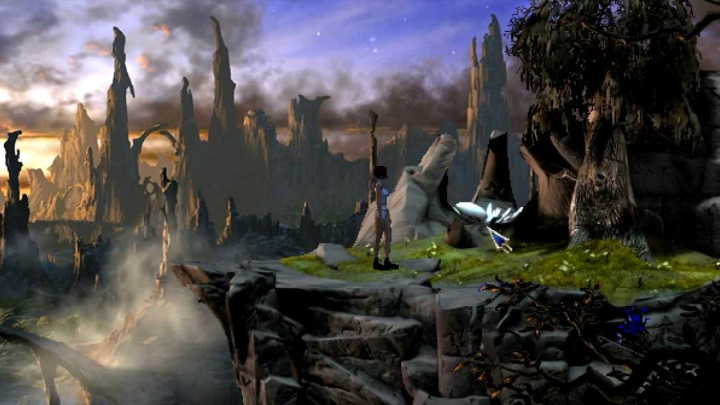 The Longest Journey is a game that was released in late 1999 in Norway, and in 2000 in North America. This was a time when games started to have bigger production values, often focusing more on state-of-the-art 3D graphics, music, voice acting, and for many genres a compelling story, often borrowing elements from movie and TV shows at the time, which were also transforming with the culture, and trying to bring new and exciting things. At the same time this was when graphic adventure games were waning since things were moving away from point-and-click and towards 3D action-adventure games. The Longest Journey tried to find a niche for itself by offering full 3D graphics, and epic story with a relatable teenage character borrowing from cultural themes from the time. It did well in terms of sales, and unlike many games at the time did equally well among males and females.

The game is about April Ryan, a teenage, attractive girl next door art student who ran away from home to go to the fictional American city called Newport. The game is set in a future, with a cyberpunk atmosphere. Corporations have immense political power; there are groups of people who literally get scammed into indentured servitude to colonize locations in space by these entities. Early in the game April discovers that she can teleport to another parallel universe called Arcadia that is based on magic, unlike her world, Stark, which is based on science. The landscapes of Arcadia are varied, and they have a fantasy and sometimes fairy tale design. For example, in one part of the game April is fighting essentially a witch that wants to make some of the anthropomorphic wood-based creatures into her next meal.

The story is somewhat convoluted, but basically the simplified and concise version is the world was once one, i.e., Arcadia and Stark were one with both science and magic working together. But the people of this world were greedy, became corrupt and so forth., the world started to decay, and then it became necessary to split it in two. These two worlds were to be watched over by appointed guardians. The Sentinel was the religious order who would watch over the balance between Arcadia and Stark and appoint the guardians. A breakaway order called the Vanguard wanted to reunite the two worlds, however, and take control. The person who is supposed to be the current guardian, has left and now the Vanguard want to rejoin the two worlds for evil purposes. April, our heroine, is tasked with saving the world and fighting the Vanguard and restoring the balance between Stark and Arcadia.

This is a point and click adventure game, so the gameplay mainly involves moving your character from location to location, speaking with other characters through various and often lengthy dialogue, and solving puzzles with objects that you find and obtain. As most point and click adventure games, it tends to have some abstruse random puzzles, that without a guide could take a LONG time to figure out. I feel like some of the abstruse puzzles are there to artificially extend the length of the gameplay. One in particular that involved putting four crystals on a board with symbols, was difficult, and not fun to go through; I ended up consulting a walkthrough. It seems like many people agree that this game is known for some illogical puzzles, and while it is not as full of these as some other old-school popular point-and-click games, it still does detract from the gameplay. 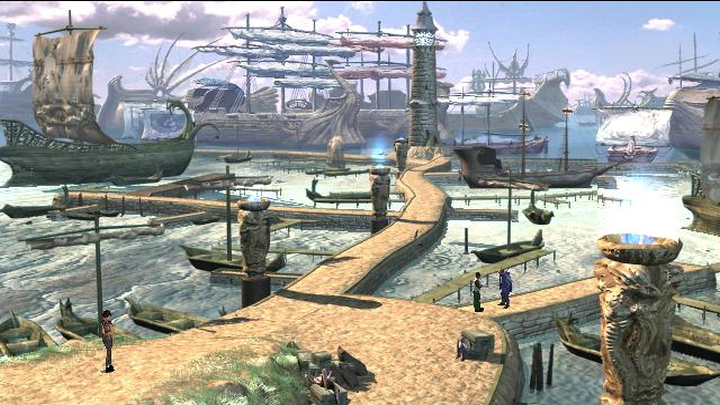 The graphics are fairly good for their time, but for modern gamers would appear polygonal. There is an unofficial HD patch it is possible to install to make the game look better. The designs of the environment are standout in this game, and both Stark and Arcadia have beautifully designed and intriguing scenery that makes for some memorable moments. It is like visiting different worlds.

The music is usually appropriate, and sometimes beautiful for the game, although, I cant recall much of it from memory. 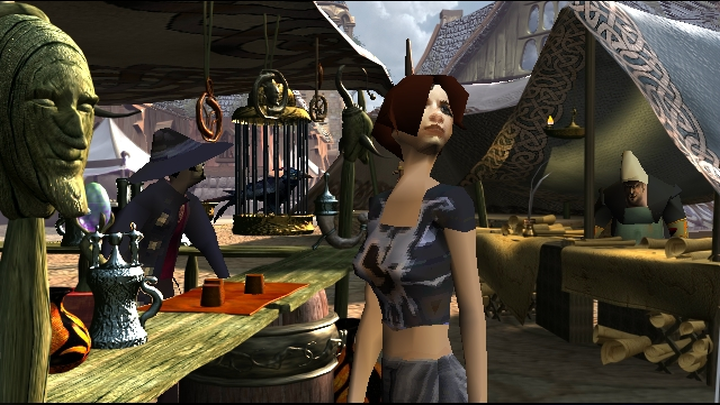 One of the best parts of this game is the character, April, she's the sassy, cute, girl next door, adventurer that has her share of teenage insecurities. Since she has a lot of the same worries, doubts and fears we have; she's relatable as a character. Its also nice how finally we get a character and dialogue that more, realistic and lifelike, sometimes talking about work, or dating or going to college. Oftentimes it has strong adult language, and an atmosphere that reminds me of something from a 90s movie, that hit me in a nostalgic kind of way. That whole 90s teenage, developmental, looking towards the future atmosphere was especially evoked in New Venice where April is studying.

In a positive contemporary review Vincent Lopez writing for IGN remarked that here for a change we get a girl next door type that talk and think about themselves and are able to make deep points about life and have similar thoughts and worries about it and death that we may have. This helps us to empathize with the characters. Aside from New Venice, Newport has a cyberpunk feel to it, and later in the game with the space colonies it again reminds me of the sci-fi of the 90s, in a nostalgic sense. The fantasy world of Arcadia, the varied stage designs are oftentimes fantastic, and creative. Sometimes it is like something out of a story book, the underwater kingdom, the floating castle, the world, of the bird-like men, many of these places have quite a character to them, that is built upon by the characters that inhabit that world and their dialogue.

On the other hand, the story is itself a bit weak, in the sense that it has some contradictory elements to it, and frankly is not so clear. In a negative retrospective review Nick Dinicola wrote in pop matters in 2015:

To protect the world from itself, some powerful dragons (er, Draic Kins) created The Divide, splitting the world, separating magic and science, and de-powering the populace. Now, a chosen Guardian watches over these worlds and maintains The Balance.

The Balance is talked about in contradictory terms, both as something that can be influenced by the fickle whims of society and as something that influences society. Only the Guardian can control The Balance, yet the bad guys are throwing it off by introducing doubt and skepticism into the world. These ideas cannot coexist. It seems like the rules for The Balance change depending on who you talk to and what kind of drama the game wants to evoke at any given time, yet April never probes deeper into this inconsistency.

This is a fair point, however I feel that it has the familiar save the world from the bad guys theme to it that everyone is familiar with, so in spite of inconsistencies it kind of simplifies the overall scheme of things. Also, another common denominator is the universal story of development from ordinary teenager to hero, that spans across all kinds of stories and literature. However, I felt like they could have also worked more on the theme of April growing up and going through her Art school. It's a shame that it didn't get a proper sequel, featuring April Ryan, although there was a kind of sequel to the game.

The puzzle solving ranges from clever and decent to abstruse and illogical so although much of it can be enjoyable, therell definitely be a few thatll make you want to reach for a walkthrough.

It may have some contradictory plot elements, and abstruse puzzles that could annoy you or leave you scratching your head, but the characters, especially the down-to-earth girl next door April, beautiful world designs oftentimes with a nostalgic 90s aspect to them, adult humour and dialogue, and general sci-fi/fantasy atmosphere are all excellent and make this game enjoyable. It is a long adventure but provides some wonderful worlds to visit, and we see April develop as a character, and hero. A must-try for all point and click adventure game fans.

PS: There is a mod of this game available from GitHub that improves the visuals and puts the game into HD, which is worth checking out.

© 1998 - 2022 HonestGamers
None of the material contained within this site may be reproduced in any conceivable fashion without permission from the author(s) of said material. This site is not sponsored or endorsed by Nintendo, Sega, Sony, Microsoft, or any other such party. The Longest Journey is a registered trademark of its copyright holder. This site makes no claim to The Longest Journey, its characters, screenshots, artwork, music, or any intellectual property contained within. Opinions expressed on this site do not necessarily represent the opinion of site staff or sponsors. Staff and freelance reviews are typically written based on time spent with a retail review copy or review key for the game that is provided by its publisher.