With the insane rise of fighting games during the 1990s, there was an attempt at "converting" established beat'em up IPs into fighters due to the genre's waning popularity. Double Dragon, one of the originators by Technos, also took the leap. Twice. The first outing, 1994's Double Dragon V, is already a mess before you even play the game when you consider its number designation. V gets its title under the presumption that Super Double Dragon was the fourth; this would later cause more confusion with the launch of Double Dragon IV in 2018. Worse, the game is based on the cartoon released in 1993, thus making the "fifth" moniker misleading due to its non-canonical status with previous games in the series.

Surely the actual product is in capable hands? Well, V was developed by Leland Interactive Media, who were mainly known for their work on the Dragon's Lair and Super Off-Road franchises. Tr... truly the ideal choice for a fighting game.

But before completely dismissing this title based on those facts alone, you should know the devs get at least one thing right in an attempt to mimic popular fighting games of its period, specifically Street Fighter II. Taking its six-button control scheme of three punches and three kicks of varying strengths, V benefits from using the Genesis' separately-sold six-button controller. However if you just have the default three-button pad, you can still use all six buttons... kinda. Like the Genesis port of Street Fighter II Championship Edition, you must hit the start button to toggle between the punch and kick buttons during a match. It's as terrible as it sounds. This is an important factor to know because, bizarrely, there's no mention of needing a six-button controller anywhere on the game's box, so you would be playing the game at half its potential without that vital piece of information.

So now that all major positives have been mentioned... 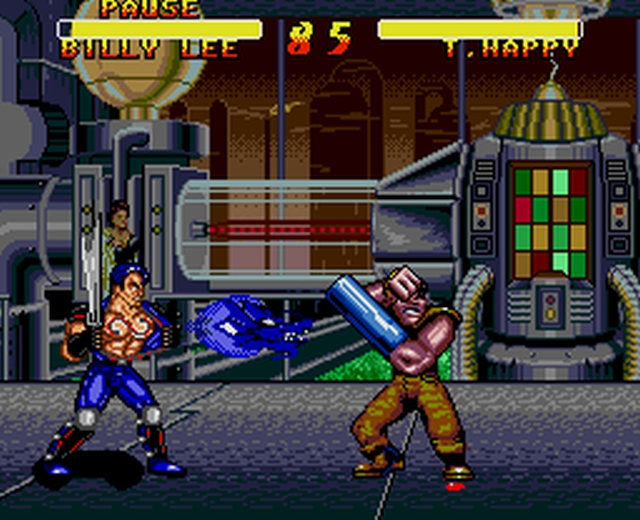 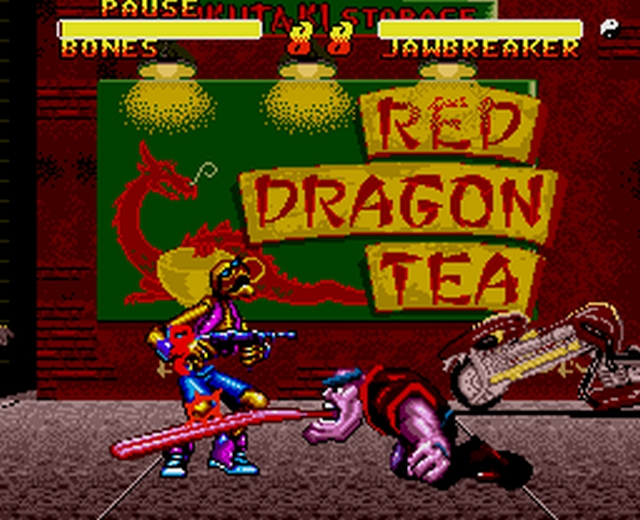 Even with the correct controller, Double Dragon V is unfortunately not fun to play; no amount of buttons can salvage its quality. While the devs should be applauded for using Street Fighter II as a template, it's done in the most generic way possible; gameplay-wise, it feels closer to the original Street Fighter. In that sense, movement feels stiff and essentially every special attack can only be performed while your character is standing. If you're not versed in the fighting genre and confused about that latter statement, in most fighting games you can "set-up" the motions for a special attack if you're airborne or in some other animation. So if you time it right, your special attack will go off the moment your character regains footing. That's not possible in V; you literally have to wait for your character to resume standing before you can start a special move. It's awkward.

That is, if you can perform the special moves at all. When you flip to the character section in the game's manual, there's only instructions for one special move per most fighters and none for two. The messed up thing about this is that each character has approximately five special attacks, but they're not listed. The reason for this is because the moves were intentionally withheld. Why? Because, and this is real, some bright person wanted discovering these special moves as part of the experience. They're even advertised as "secret moves" on the front of the game box. To say that this is an absurd stunt would be a major understatement. Fighting games are all about variety, the sustainability of their replay value hinges on matches being different with every new session, so why would you do such a thing as limit your incoming player base with one special move for the sake of "secrets?"

Now say you're a Double Dragon fan, willing to accept the change in genre and manage to learn the hidden moves to have a better grasp of this stiff fighting game; at least you get to play recognizable characters from the series, right? Of the 12 playable fighters, ten are exclusively from the TV show. You can tell who since they have exaggerated attributes and what can best be described as vomit-colored palette attire. Sickle, for instance, is a man with a red mohawk who is wearing a purple spandex outfit with sharp blades spanning his entire arms. Then there's Blade, whose face is being covered with an eye patch, a headband with a red lens attached on its side, and a mouth mask, not to mention a tea green-colored breastplate and one lean blade per glove. 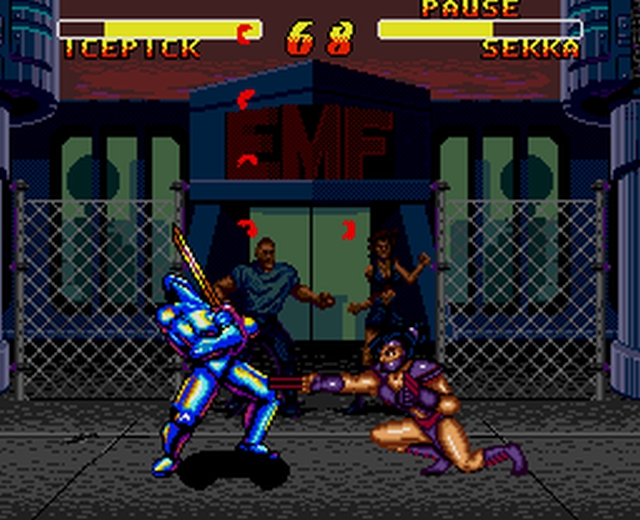 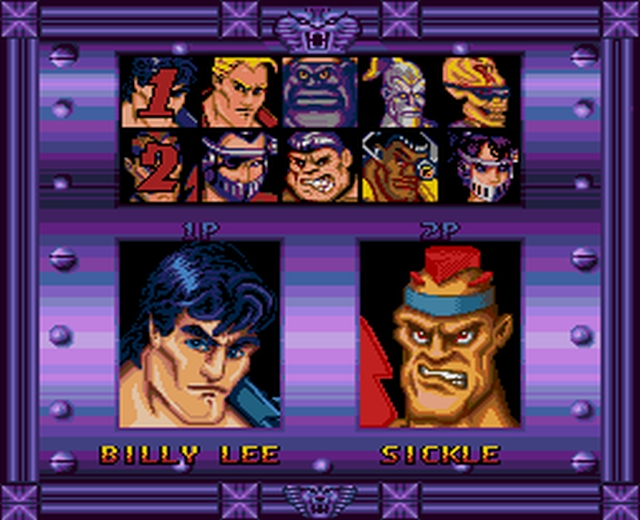 The ridiculousness of their designs is obviously-intended since they were made for selling toys of said characters. Unfortunately, the returning two characters aren't exempt from this. The titular brothers, Billy and Jimmy Lee in their trademark blue and red outfits, now look like righteous Saturday morning heroes with masculine jawlines as far as the eye can see and dragon tattoos on their chests. But at least the bare-knuckle fighting style from their beat'em up roots is preserved, correct? No, each brother now attack with, of all things, a sword. Because when you think of Double Dragon, that's clearly the first thing that comes to mind.

The devs tried indulging two groups and failed miserably. On one end, long time DD fans received a combo package nobody asked for: a fighting game for their beat'em up series and one centered around the cartoon. Shoot, even a beat'em up based on the show would have been a better deal. Fighting fans fared no better, getting a fighter that feels stiff, handicapped, based on a version of a series that's meant to sell toys, and already archaic on release. It used Street Fighter II as an example, sure, but when V released during the third quarter of 1994, more refined versions of Capcom's game were released with II Turbo and Super. Technos would give their own fighting game take on the series in 1995 on the Neo-Geo, but it was too late: the IP was already tarnished with such titles like Double Dragon V.

If you enjoyed this Double Dragon V: The Shadow Falls review, you're encouraged to discuss it with the author and with other members of the site's community. If you don't already have an HonestGamers account, you can sign up for one in a snap. Thank you for reading!

© 1998 - 2022 HonestGamers
None of the material contained within this site may be reproduced in any conceivable fashion without permission from the author(s) of said material. This site is not sponsored or endorsed by Nintendo, Sega, Sony, Microsoft, or any other such party. Double Dragon V: The Shadow Falls is a registered trademark of its copyright holder. This site makes no claim to Double Dragon V: The Shadow Falls, its characters, screenshots, artwork, music, or any intellectual property contained within. Opinions expressed on this site do not necessarily represent the opinion of site staff or sponsors. Staff and freelance reviews are typically written based on time spent with a retail review copy or review key for the game that is provided by its publisher.