How's this for a narrative hook: an automated carrier equipped with nuclear missiles have malfunctioned. Because trusting a machine to transport extremely dangerous, volatile weapons on its own makes perfect sense. Now the defective carrier is on the shortest path to the disposal site, meaning it's willing to drive through buildings; a single collision is all it takes for the missiles to go off, potentially spiraling the planet into an apocalyptic future. That's where the Blast Corps crew comes into play. A team whose original purpose was to tear down buildings and have cities reconstructed due to, as the manual puts it, "urban decay," and now they're tasked with destroying all structures in the path of this doomsday mechanism.

Nuclear winter and gentrification. Not the first two things you think of when discussing a 1990s-era Nintendo-backed title...

But make it past the bizarre story set-up and you get what its premise promises in gameplay form: an excuse to cause destructive mayhem. Get plopped into a stage and start wreaking havoc before the carrier has a chance to collide with anything, be it city landscapes or other solid structures. The first stage alone does a great job introducing the main flow and overall tone of the game, where you're placed in a bulldozer, endearingly called the RAMDOZER in-game. The moment you navigate this vehicle, you notice Blast Corps playing into its chaotic concept by letting it immediately drive around at top speeds, plowing through farm houses and other structures like it's nothing. Better yet, the Ramdozer effortlessly drifts. It's the perfect vehicle for this opening stage, because it lets you know the game, ideally, just wants you to pick up, play, and get right into the madness. 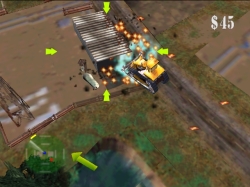 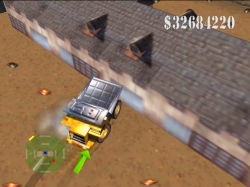 This becomes all too apparent after you complete a few more stages and get introduced to other machines. J-Bomb, for instance, is a giant yellow mech with a jetpack. Its gimmick? You make it hover over buildings and then slam down, reducing them to ashes. Another vehicle, Sideswipe, lives up to its name by literally attacking structures with crushers protruding from its sides. A drive-by crushing. There's a small catch, as it needs refills littered throughout a stage to sustain power. Also, while Blast Corps just makes you destroy stuff en masse, the devs find ways to make it varied. One stage, for example, begins with J-Bomb, but soon realize you need to hop in a train, a speedy car, and a boat in order to make pathways for the carrier. The stage doesn't outright state this or how, so it ultimately becomes one big puzzle piece to solve.

Even so, you can complete the bulk of stages within a weekend, or likely just one day if you have nothing else going on. Does that lessen its entertainment value? Absolutely not, since the devs manage to make the repetitive action of obliterating buildings fun and "wholesome." Despite its dark opening themes, they juxtaposed that with an overall light atmosphere, the Blast Corps crew sounding like they're having a good time, and even some occasional quirky music that includes banjo and jaw harp instruments. Considering this is a Rare game, it also comes as no surprise that they encourage you to replay and 100% each stage by destroying every structure, track every collectible, and uncover secrets. 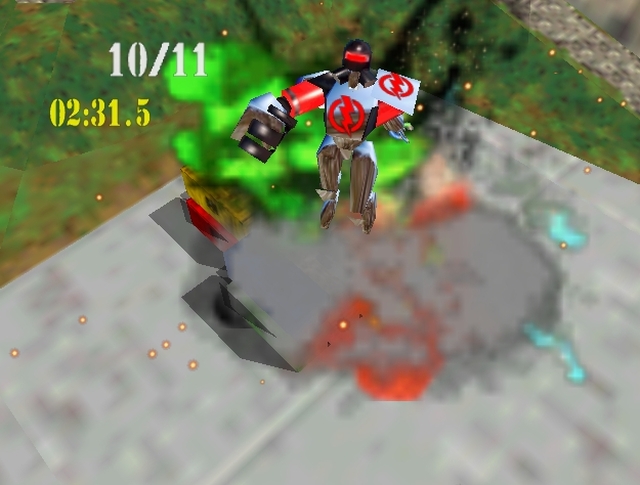 Regrettably, there are design flaws that knock down the overall experience from being truly enjoyable. Yes you can replay stages to fully complete them, but this ability comes with an odd hindsight. Any stage that involves the carrier, which is the majority, has the carrier removed; you're now alone within each stage, void of danger, to 100% them. Considering the carrier is a very essential aspect that give these stages their flair, it would've been nice to have an option to replay with them intact. If you want to fully redo these stages, you really have no choice but to start a new save file.

Though, this next problem borderline makes you happy to be done with Blast Corps upon completion. Every vehicle or mech feels good to control... except for the dump truck, called Backlash. Remember how the Ramdozer causes major damage with any part of its body and can drift effortlessly? The dump truck is basically a weakened version of this, only causing a semblance of destruction with its metallic rear. Just drift, right? With Backlash, you actually now have to press the right shoulder pad to perform the drift. This in itself isn't the problem, but does segues into it. For some reason, when it comes to constituting what counts for the "rear," the game can be very stubborn; if you happen to be off by a smidge, Backlash bumps into a building instead of demolishing it. 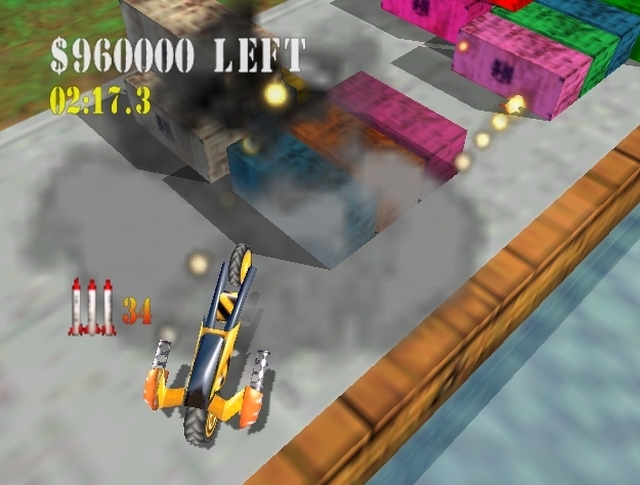 This is both awkward and frustrating for several obvious reasons. Your goal in Blast Corps is to destroy several structures per stage, correct? Imagine a situation where you succeed at destroying a section of a building with every five attempts because of shoddy hit detection, and you have to destroy the other portions before the carrier arrives. You did it? Now attempt this feat for the next six to eight buildings ahead. And if you lose at any point, you have to start from the very beginning. Fun. If there's one "positive" to this horror show, it's the fact that there aren't too many dump truck stages, however you must beat them if you're aiming for a true ending. Worse, the two final main dump truck stages are downright insufferable because of how perfect they expect you to perform. The carrier is disturbingly close and you can't make a single significant mistake in the process. Infuriating.

It should be noted that the overall product feels very reminiscent of Rare's earlier "vehicular" titles from their NES days, such as R.C. Pro Am, Captain Skyhawk, and Cobra Triangle. Interesting, considering Blast Corps' small team mostly comprised of then-fresh graduates, unknowingly channeling classic Rare with their first project. That's why it's unfortunate that a genuinely fun idea, earnest in its presentation to give you unadulterated mayhem, is knocked off its podium due to a single flawed design. And thanks to the game's arbitrary replay system, you have to face these dreaded stages every time you play a new file instead of skipping them. Blast Corps is a recommended play if you're really into blowing stuff up, but it's not a must due to select stages being downright aggravating.

Challenge is good with sensible escalation, but not when it feels like the devs were intentionally being masochistic...

If you enjoyed this Blast Corps review, you're encouraged to discuss it with the author and with other members of the site's community. If you don't already have an HonestGamers account, you can sign up for one in a snap. Thank you for reading!

© 1998 - 2022 HonestGamers
None of the material contained within this site may be reproduced in any conceivable fashion without permission from the author(s) of said material. This site is not sponsored or endorsed by Nintendo, Sega, Sony, Microsoft, or any other such party. Blast Corps is a registered trademark of its copyright holder. This site makes no claim to Blast Corps, its characters, screenshots, artwork, music, or any intellectual property contained within. Opinions expressed on this site do not necessarily represent the opinion of site staff or sponsors. Staff and freelance reviews are typically written based on time spent with a retail review copy or review key for the game that is provided by its publisher.