Originally created by Jay Geertsen in 1984 when he was working at Hewlett-Packard, Columns was made with the intent of having a basic and fun product that could be enjoyed by anyone inside the company. Within this game, objects encased with varying colors fall, one after another, from top to bottom, inside a vertical rectangular chamber. If the chamber fills to the top with said objects, the game concludes. How would you prevent such a thing from happening? You need to make these objects disappear, and to do this you must connect three or more of the same color. Sounds simple, but there are several catches that make this task a tad more demanding.

Living up to its namesake, objects fall in the shape of columns, each with three blocks of differing colors. As they automatically descend, you can move these columns around prior to them landing on a surface for a potential match-up, but a few handicaps are in play as this occurs. Firstly, they can only fall as one shape: a vertically-shaped column. You can not twist or bend the shape like in similar tile-matching titles, but you can shuffle the order of blocks within each column. Further adding complications, the way you make blocks disappear from the ever-growing surface isn't as simple as lining them across the spectrum; here, you have to match the same-colored blocks of three or more in either vertical, diagonal, or horizontal lines. 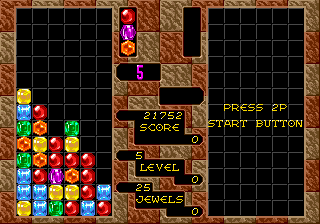 This intentionally-limited design lends to the overall "challenge." Though it should be noted that in Jay's original version of the game, you're allowed to play tic-tac-toe with these blocks at a very leisurely pace, lending to his vision of wanting a game to be accessible by all. Eventually, Sega became aware of Columns and acquired the rights to make their own version, and with that came changes. Two noticeable changes are the graphical and sound presentation. Along with trading out the blocks for colorful jewels, Sega aimed for a Greek mythology motif, and this becomes too apparent when you realize the three main music themes are named after the three Moirai. At the very least, these give the game distinct characteristics that separate it from competing puzzlers.

However, another notable change comes in the form of columns dropping at a faster rate the longer you survive. This inclusion is an actual game changer since it literally influences how Columns is played when compared to the original's spirit. No longer can you unravel the chamber at a relaxing pace, instead having to contend with the constant threat of defeat as columns eventually drop at tense speeds. "Challenge" now becomes challenge. Considering this is a very common feature in puzzlers, it's easy to perceive this as a welcoming addition; injecting much needed pressure to a basic concept, right? 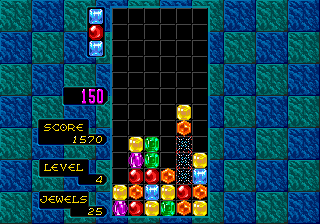 In Columns' situation, this inclusion makes the already-limited gameplay feel more confined. For instance, regardless of your skill level, the chamber will fill up more quickly due to the vertical restrictions imposed on the gameplay; you're consistently working around surfaces that look like spiky mountains. That leads into the next, more pressing issue: the "end game." Columns is based around gameplay that goes on until you fail, which is basically when the clutter reaches the top of the chamber. In similar titles, when you reach the top you can attempt a last second "miracle," fighting out of a corner because you're bending and twisting successive blocks like crazy, which can lead to a chain reaction of blocks disappearing en masse.

But the chances of that feat happening in Columns has been cut in half due to its design. The tower-like surfaces, when paired with the limited concept of lining three or more of the same jewels in very specific ways, make it difficult to fight out of a corner. A very common situation can happen where you can't even line up any jewels, in any position, and so you're forced to start anew... at the very top. With speedy columns. Even if you try the method of pausing to figure out where you can drop the next column, Sega's supposed speed "enhancement" is vehemently against you. In terms of wanting to copy the biggest hit of that era and, since this rendition was originally an arcade release, has a quarter-munching mentality, it makes sense. But this could have been better implemented with a few extra adjustments. 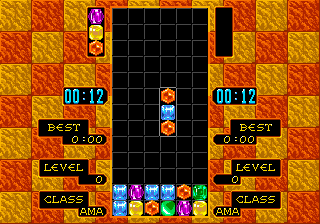 Though when it came to the Genesis/Mega Drive port, Sega actually modified the formula a bit with a mode called Flash Columns. No longer an endurance session, the objective here is to dig your way down a pre-stacked chamber to clear a single flashing jewel placed at the bottom, hence the title. It's absurdly easy on the lowest default settings, but adjust them a bit and add starting stacks, and it becomes a genuine challenge getting down to that single jewel. Also making up for the lack of a competitive option in Arcade mode, Flash Columns also allows two players to fight against each other to see who destroys a flashing jewel first in their respective chamber. You can even play a silly mode where two players can take turns dropping columns in a single chamber.

While those bonus features won't radically change the fundamentals of Columns' design, it's nice that they're even in here as a semblance of variety from the basic arcade format. Sega's first Columns is far from a terrible product, but its glaring flaws and overall awkwardness prevents it from being a must play when better tile-matching titles exist. Even its own sequels have altered and tinkered with the main formula for more flexibility, such as Columns II being a full-scale version of Flash Columns, and Super Columns allowing blocks to be turned horizontally and have pieces break off when you do so. If that latter title sounds appealing, then consider checking out the Puyo Puyo series; it's basically a more flexible template of what Sega wanted Columns to be.

If you enjoyed this Columns review, you're encouraged to discuss it with the author and with other members of the site's community. If you don't already have an HonestGamers account, you can sign up for one in a snap. Thank you for reading!

© 1998 - 2022 HonestGamers
None of the material contained within this site may be reproduced in any conceivable fashion without permission from the author(s) of said material. This site is not sponsored or endorsed by Nintendo, Sega, Sony, Microsoft, or any other such party. Columns is a registered trademark of its copyright holder. This site makes no claim to Columns, its characters, screenshots, artwork, music, or any intellectual property contained within. Opinions expressed on this site do not necessarily represent the opinion of site staff or sponsors. Staff and freelance reviews are typically written based on time spent with a retail review copy or review key for the game that is provided by its publisher.