The Aztec Paradise exists, yet no one knows exactly what it is or where it's located, but a certain someone is determined to find it within Central America. The young adventurer El Niño, Spanish for... the Niño, has set out to find numerous labyrinths in the hopes that one is hiding the supposedly unattainable, unfathomable treasures. Through forests, across deserts, amidst ruins, and other such remote locations, the sword-wielding "Child" must seek and fend off their wild inhabitants in order to achieve his dream in this Aztec Adventure. But if you think he's up against trivial wildlife like normal, dangerous bears or other such menacing animals then, well, you wish.

As you guide El Niño across linear, guided paths in an overhead perspective, you will encounter the strangest of creatures, each one more weirder than the previous one. Turtles? Turtles can't be that bad? There are instances where you have to fight several spiky turtles on a single screen. You want bears? How about a rabid b... bear-like creature that moves by teleporting every few steps. Thankfully, these enemy types are short-ranged fighters that can be taken out easily; the ones you should be concerned about are opponents that attack from a distance with projectiles, since they essentially make up the more challenging encounters. 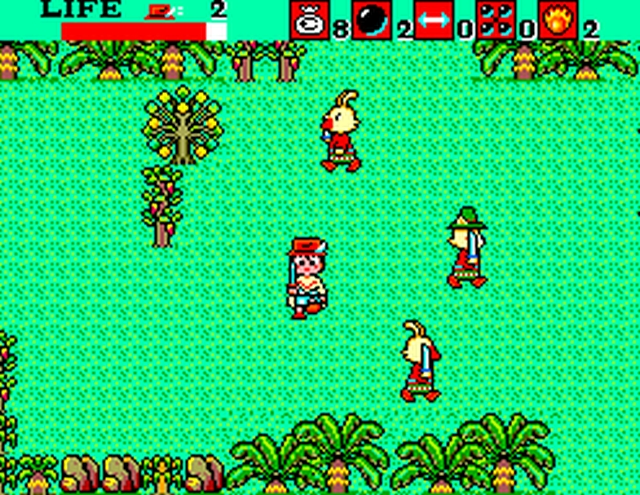 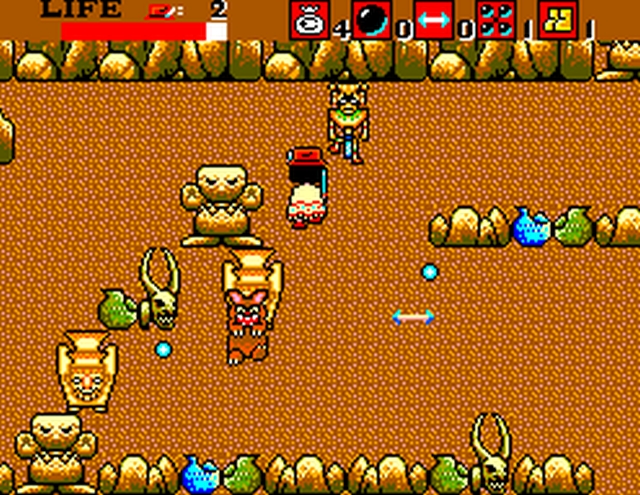 But why attack enemies if you can avoid most by walking around them? In perhaps Aztec Adventure's smartest design choice, every enemy drops helpful items, from money bags and iron balls, to spears you can toss. Granted, these extra weapons won't do additional damage to bosses, but they're definitely welcoming for when you want to deal with a distant foe without having to get close. Furthermore, each stage features a special item which you usually activate to make any real progress, such as collecting fireballs to burn away barricades or walking across water with special boots. Iron balls, spears, and fireballs are self-explanatory in an action title, but what about money? Surely you use currency to buy items? 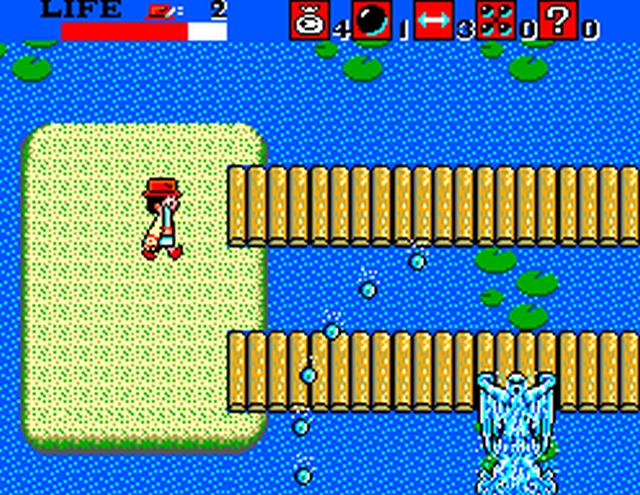 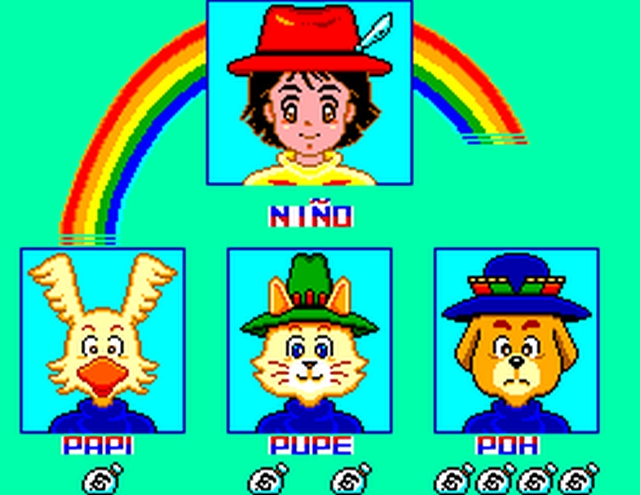 It's not what you would expect, as Aztec Adventure turns money into a gimmick that sounds intriguing on paper. Each stage has anthropomorphic dogs, cats, and what looks like duck-rabbits in poncho garb, all of whom are enemies. However! Bribe them with money and they immediately become allies. Think of them as the equivalent of helper ships in a shoot 'em up; they mimic your movement and attacks. Sounds cool, but implementation is awkward. Considering the amount of enemies on screen, plus objects and obstacles taking up additional space, it gets cramped for your helper. It's also tricky timing your ally's attacks against an enemy parallel to your own movements, so they're terrible as backup. Worst of all, thanks to space being tight, your helper won't last long as they keep colliding with everything. It's an unfortunate waste of a gimmick.

Thankfully, the "bribe system" is something you can choose not to do, making it one of the least problematic aspects of this journey. As you may have deduced so far, Aztec Adventure is packed with features, gimmicks, and unique variety. It all sounds fun and challenging, but these assets are unfortunately squandered in a generic experience. This is likely due to the fact that about two or three stages into the 11-stage escapade, you more or less witnessed everything the game has to offer. Despite there being an interesting mix of enemies to fight, they really fall into two categories: weak melee fodder and projectile-based foes, the latter being more of a constant threat. Though, since you have a decent-sized life bar and wishing wells to replenish your health in each stage, a little bit of caution and grinding for additional items can help prevent loss of life in most scenarios. 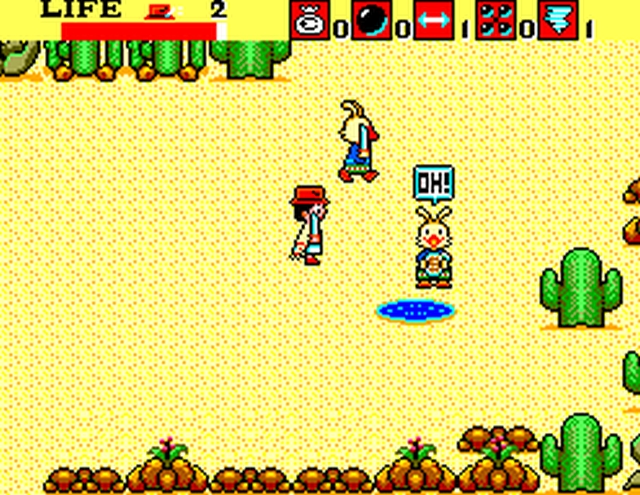 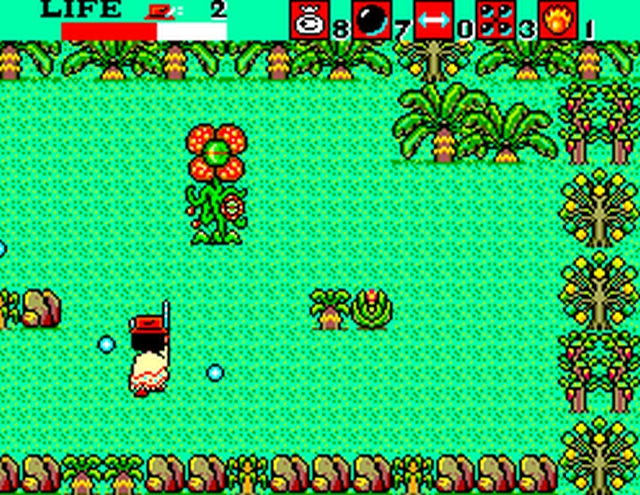 Once you realize these two types and know how to handle them, the remainder of your adventure almost feels like a chore. It doesn't help that the game doesn't exactly go at a fast pace; everything, from El Niño to all the normal enemies, move at a leisurely tempo. To top it off, the latter five stages just recycles enemies, environments, and hazards from the first half, granted with new linear paths. You know what would have been better than remixed stages? Labyrinth stages. At the end of each stage, you walk through a labyrinth entrance. Logic would dictate that the very next stage takes place within said labyrinth... but for some bizarre reason you're instead transported to the next outdoor stage. Another unfortunate waste of an idea.

Aztec Adventure is just a weird product. It has weird enemies, it has a weird money system that doesn't work, it has weird flaws, and it weirdly dodges aspects that could have made the game better. It gets weirder, too. Aztec Adventure is called Nazca '88 in the original Japanese release, which is referring to the original setting of the game: Nazca, Peru. If you manage to reach the final stage, this becomes even more obvious due to the appearance of "lines." But that's not the weird part; this was also released in Brazil, which is located right next to Peru, and yet... they retained the name Aztec Adventure over Nazca. Sadly, being weird is probably the strongest aspect this game has going for it.

If you enjoyed this Aztec Adventure review, you're encouraged to discuss it with the author and with other members of the site's community. If you don't already have an HonestGamers account, you can sign up for one in a snap. Thank you for reading!

© 1998 - 2022 HonestGamers
None of the material contained within this site may be reproduced in any conceivable fashion without permission from the author(s) of said material. This site is not sponsored or endorsed by Nintendo, Sega, Sony, Microsoft, or any other such party. Aztec Adventure is a registered trademark of its copyright holder. This site makes no claim to Aztec Adventure, its characters, screenshots, artwork, music, or any intellectual property contained within. Opinions expressed on this site do not necessarily represent the opinion of site staff or sponsors. Staff and freelance reviews are typically written based on time spent with a retail review copy or review key for the game that is provided by its publisher.