Scrolling shooters have been around since the dawn of gaming in one form or another, so it is a very laudable feat when I tell you that its unlikely youve ever played anything quite like Airstrife. On the surface, it looks like a slightly modernised 1945, replete with vintage fighter crafts slugging it out in the unfriendly skies. But thats fine, your old-timey plane flies perfectly well, and can both give out and take a beating. Unlike 1945 and its ilk, your Airstrife fighter has limited shields that allow it to absorb a few blows before its plucked from the skies. It even has a defensive trump card up its sleeve; the barrel roll. Launching yourself into this roll allows you to harmlessly bypass any streams of artillery directed at you, though does temporarily rob you of being able to return fire. It means that theres no more getting cornered; if a wave of tracer fire and missiles are hounding you across the screen, a good sense of timing will allow you to slip through it unscathed.

Airstrife gives you a lot of tools to survive, that, in isolation, might make the game sound like a bit of a cakewalk. Except it isnt. At all. The barrel roll is only effective if you get the timing down just right, and an out-of-sync roller will simply bank into incoming fire rather than avoid it. And, sure, you can survive some of that because you have a shield to absorb some blows only, once that shields gone and you explode, thats it. No picking back up from where you died, and no checkpoint system reviving you part way into the level. Its done. You can start the stage from scratch or give up. 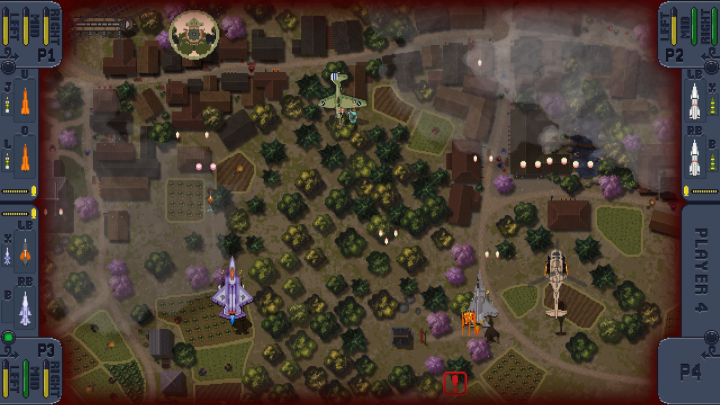 In every sense of the word, Airstrife is a grind. In an era when even the hardest scrolling shooters are happy to give you a huge pile of credits so you can just continue-spam your way through games, this one is a throwback in many ways, and something very different in others. Its almost imperative that you fall back into retro mindsets, playing levels over and over until progressing through is muscle memory as much as it is twitch skills. But repeat plays are offered further reward; complete a normal level, and youre eligible for a cash recompense at the end. Steady runs where you take little damage and conserve the majority of your ammo are good ways to get rich quick. Except its not quick. At all. Theres a hell of a lot of practice that will need to go into scoring a perfect run. Its of no exaggeration to point out that even on the easiest setting, Airstrife will kick your arse.

Thats where the grind comes back in, because there has to be some way to spend all that money youve worked so hard to hoard. Limp yourself through the first few opening stages, and youll find yourself back in a hanger. The hanger has options; one of which is to carry out playing missions, new and old, to advance the game onward. But theres also an explore function that carries no narrative weight. It exists for you to go out, take on the usual suspects and, if you do well enough, obtain a blueprint. 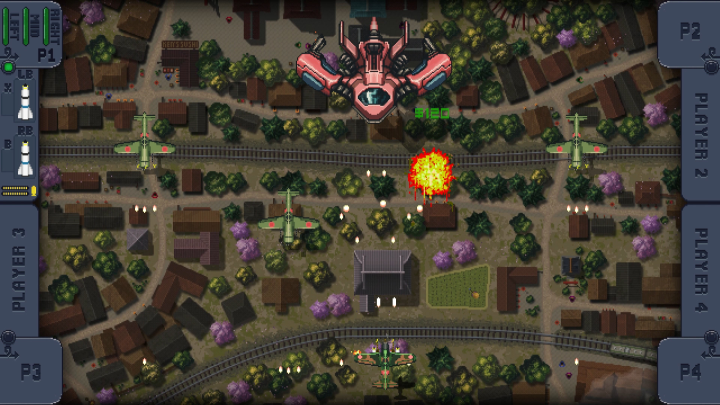 Aside from launching missions, the hangers main function is the steady development of your fighter craft. With the right blueprints and a big enough pile of money, you can engineer your craft to fit numerous different moulds. Or, if you find the right parts, craft a whole new base craft and weld new bits on to that instead. Parts can improve your engine, which improves your speed, or graft on better shielding so you take a few more blows. Theres a ton of new weapons you can try and bolt on, ranging from cannons, heavy machine guns, torpedoes and missiles, but an unmodified craft will be unlikely to bear the bigger and badder of these. Youll need to compensate by fiddling around with additions such as the airframe, which youll need to amend to make more room for the larger weapons, and the hardpoint which will help you deal with the excess payload.

It helps slowly erode the sharp difficulty edge that you can grind away and bolster your chosen fighter, turning it into a meandering brute or a nimble nuisance depending on your whim. Whether or not you lean into this, success ultimately means the same thing; youre going to be flying missions a lot to either collect resources or perfect enemy flight patterns. Its a definite plus that you dont need to suffer in solitude, as Airstrife can locally support up to four pilots at once. Because all your weapons are made in the hanger, you even forgo the usual arguments you have with that one uncharitable friend who hangs around the top of the screen to steal all the powerups. You dont need homing missiles AND lasers, Marc; leave some for the rest of us.

If you enjoyed this Airstrife: Assault of the Aviators review, you're encouraged to discuss it with the author and with other members of the site's community. If you don't already have an HonestGamers account, you can sign up for one in a snap. Thank you for reading!

© 1998 - 2022 HonestGamers
None of the material contained within this site may be reproduced in any conceivable fashion without permission from the author(s) of said material. This site is not sponsored or endorsed by Nintendo, Sega, Sony, Microsoft, or any other such party. Airstrife: Assault of the Aviators is a registered trademark of its copyright holder. This site makes no claim to Airstrife: Assault of the Aviators, its characters, screenshots, artwork, music, or any intellectual property contained within. Opinions expressed on this site do not necessarily represent the opinion of site staff or sponsors. Staff and freelance reviews are typically written based on time spent with a retail review copy or review key for the game that is provided by its publisher.