Theres a growing segment of gamers who fall outside the stereotype of a core gamer from the 2000s. We play games one-handed in a rocking chair with a sleeping baby. We aspire to go to bed at 9:30. Our game library and playtime have reversed, buying up games we intended to play but may never get to. We have a mortgage, a job, and a backlog of games we got on sale.

So when the store description of a game says it is designed with people who dont have much time for gaming on a day-to-day basis in mind the audience is deliberate. Legends of Amberland wants to invoke nostalgia in people that love memories of the Gold Box series, Might & Magic, and Dungeon Master--evoking those classics by name--but without the time or fortitude to get arcane games actually running. It straight up tells you this is no-nonsense running around dungeons, beating on monsters, and collecting rewards for the monsters you beat up.

I had been trying (and failing) to play Might & Magic III for years. It's not just that getting legacy PC games running can be difficult. You need reference material to know what items and abilities do, you need graph paper for mapping, you need to take notes. Bouncing off an old CRPG usually means you won't finish it--the barrier to re-entry is too high.

Amberland is essentially a game for people that want to play CRPGs but can't because life. It's a 90s RPG as you remember them, with all the 90s nonsense removed. Movement is grid-based, monsters are visible, and the world is turn based. It plays like a simplified version of Might & Magic III. Dialogue and story are sparse and easy to skip over, dungeons are straight forward, and the focus is on whacking monsters, treasure, and leveling up. And if you don't know what something does or forget the controls, hold ZR at any time for a help overlay. Amberland wants to be easy for you to play. Put the graph paper away. 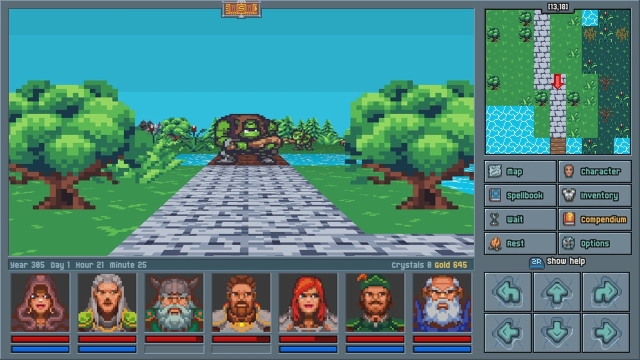 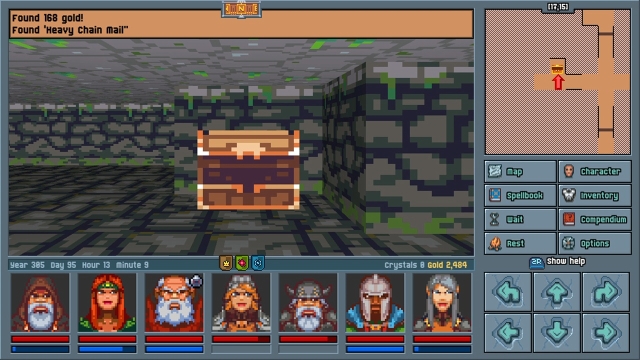 
Developed by Krzysztof Koźmik for PC, the Switch port developed by Pineapple Works works is faithful to the original game. Individual actions to attack and cast spells in combat are mapped to individual buttons (rather than having a traditional cursor and menu), which makes combat faster and the cost of accessibility. Fortunately, since hold ZR will show what buttons are mapped to what action, this is an oddity the player won't notice after the first few encounters.

In about 15 minutes, you can clear a dungeon, fill in the map, kill everything in it, and get all the treasure. Return to a town and you probably leveled up too. Everything about Amberland is blazing fast. Animations are kurt, information is clear, and with each button mapped to an action, combat moves at the speed of the players thought--an encounter can literally be over in less than one second and that's a good thing.

There are some conspicuous omissions from the core game loop. All towns are menus (a la Wizardry), offering identical shops and services, shifting the focus entirely to exploring the world rather than talking to people and such. There are castles, which are similar to towns but can be explored, and usually include a basement with a few encounters and some treasure. Dungeons lack traps or features besides monsters and treasure. While this sounds grievous on the surface, it appears to be an intentional decision. In interviews, Koźmik has indicated dungeons were kept simple to keep the experience breezy and reduce barriers for people that bounce off and return to the game.

This is a common theme in Amberland. From character creation to the campaign itself, everything is designed to be forgiving and easy to understand. The player can re-allocate ability points for their characters for free, which is a forgiveness few RPGs provide. Your current goal is always to go somewhere that you haven't been, indicated by incomplete parts of your map. Dungeons are short, monsters don't respawn, and the default difficulty lets the player smash through mobs without much effort.

In about 20 hours, Im confident that I genocided every living monster in the land and mapped every square in every dungeon. At a different time in my life, I might berate an RPG for such flippant brevity, but these days Id call it a feature. It manages to feel like a classic RPG without being one, giving the player the satisfaction of blasting through a dungeon, getting all the treasure, and leveling up characters when I return to town while drinking my morning coffee. Yeah, that's a specific need, but too few RPGs aspire to be so approachable. Good luck making progress in Shin Megami Tensei V or Octopath Traveler when you only have 10 minutes.

It would be unfair to claim that brevity is Amberlands only feature. Equipment, for example, is not restricted by class but by a characters encumbrance stat, which is influenced by class selection. This means that a magic-using character can equip a powerful sword or armor but then wont have the capacity for much else. This makes for defacto but not strict class restrictions, which makes equipment decisions both simpler and more interesting--no finding nice items restricted to a class you didnt use since every character can use every item. 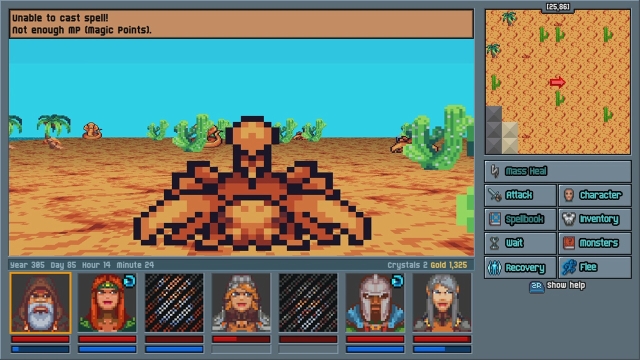 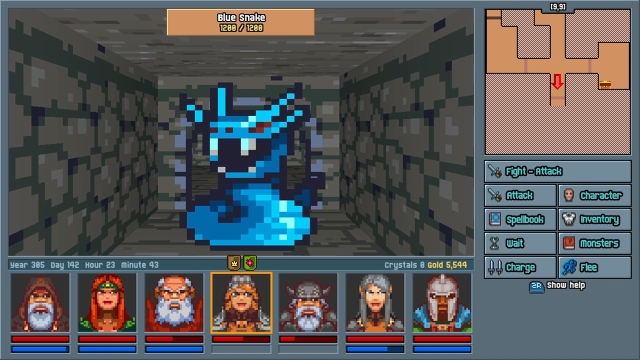 Characters in the center are targeted much more but will go first during combat.


Another unorthodox design decision is turn order. Your party acts based on position, which the center character always acting first, and then radiating out from there, with monsters acting between actions based on speed. On the other hand, characters are targeted proportionally to their turn order, with the middle character getting beat up a lot. This mechanic is simple to understand but leads to some interesting decisions around party order, since you want your hard-hitting characters to go first but they might not necessarily be able to withstand attacks.

All of these things point to a game that was crafted lovingly and thoughtfully. It's a CRPG made for an audience that doesn't have the luxury for CRPGs. For anyone that wants to play Wizardry VII or World of Xeen but lack the time and energy for such a task, Legends of Amberland is breezy modern take on that formula you can actually fit into your life.

If you enjoyed this Legends of Amberland: The Forgotten Crown review, you're encouraged to discuss it with the author and with other members of the site's community. If you don't already have an HonestGamers account, you can sign up for one in a snap. Thank you for reading!

© 1998-2022 HonestGamers
None of the material contained within this site may be reproduced in any conceivable fashion without permission from the author(s) of said material. This site is not sponsored or endorsed by Nintendo, Sega, Sony, Microsoft, or any other such party. Legends of Amberland: The Forgotten Crown is a registered trademark of its copyright holder. This site makes no claim to Legends of Amberland: The Forgotten Crown, its characters, screenshots, artwork, music, or any intellectual property contained within. Opinions expressed on this site do not necessarily represent the opinion of site staff or sponsors. Staff and freelance reviews are typically written based on time spent with a retail review copy or review key for the game that is provided by its publisher.