Saint Kotar and I did not start on particularly agreeable terms. As a Point & Click adventure, its all a little stiff and clumsy. Everything is set to a pace that feels about two steps too slow, which isnt ideal in a game that relies a lot on exploration and backtracking. There isnt, for example, a way to skip through screens, and the best option available to you is to double-click your lumbering protagonist into a shambling run of sorts. Youll see this often as you trudge back and forth through the gloomy Croatian town of Sveti Kotar, crossing through the same mist-filled streets and rummaging through the same distressed buildings. Sometimes, exploring the awful little village is a grind and, initially, its frustrating. Well, not just initially - its always frustrating - but begrudging acceptance is only a headful of nightmares away. Exploration isnt supposed to be a seamless, enjoyable experience. Sveti Kotar is an awful place to visit; everything about it is suitably anchored with dread and waste.

Sentiments shared very early by one half of the dual protagonists. Youll spend the majority of the game controlling Benedek, a man who has spent his entire life in servitude to either his parents harsh religious doctrine, or to the monkhood he committed to. Even before everything starts getting a bit murdery, hell make it clear that he resents being there and would rather be back at his monastery. Hes strong-armed into the trip by his estranged sister, whos also responsible for her husband, second protagonist, Nikolay. The two share an interesting dynamic; whereas Benedek often struggles to be anything more than an extension of his firmly rooted faith, Nikolay abandoned his for the sake of his family. Theyre not particularly compatible, but are forced to try and coexist when the girl that brought them together vanishes overnight without a trace. 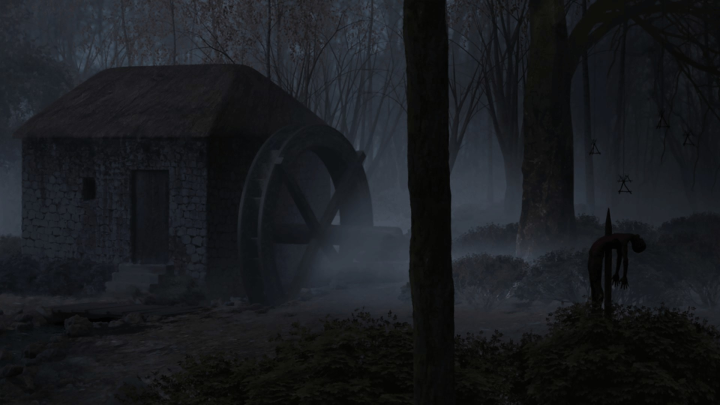 At its heart, Saint Kotar is a mystery with what would seem to be a very clear endgame: find the girl. Except, theres this inescapable series of horrific events that obscure any answers the two might search for. Early on, the pair are taken into enforced police custody and marched into the heart of the nearby forest, to the exterior of an abandoned medieval church. There, theyre shown the swinging corpse of the towns mayor, skinned and defiled. The eyes are gone, parts of the brain and heart have been exhumed and eaten, the police explain. Its a depressingly common occurrence, courtesy of an ancient sect of cannibalistic moon ghouls that the three outsiders are assumed to be associated with. And now one of the visitors is missing just after a string of gory deaths. This is considered suspicious.

The pair conduct their investigations into this differently; Nikolay with an increasing sense of desperation at trying to reclaim his family, and Benedek through a lens of sacramental judgment to a town he considers Godless. The latter is the embodiment of an unlikable and flawed protagonist, lacking any form of social skills due to his isolated life as a monk, but forced to interact with people he considers damned. All things considered, hes a bit of a condemnatory dick who is done with the concept of the town seconds after arriving. Pick the right series of events, and theres even an early ending option where he just nopes the hell out of there, gets back on a train, and never thinks of Sveti Kotar ever again.

Youll probably want to avoid that because, once you get used to the awkward mechanics and the unlikeable protags, theres this wonderful sense of creeping anxiety that runs through every corner of the town. Everything feels tainted and broken, good people with once pure beliefs slowly twisted and perverted out of fear or misguided self-preservation. So much of the tale is played off against their religious beliefs, with every inhabitant abandoning or suffocating in their faith differently. In trying to solve their mystery, Benedek and Nikolay kick up forgotten atrocities and carefully disguised sin at every turn. People go missing with enough regularity that its become the horrific norm; sometimes they dont just show up as eviscerated corpses with their eyes gouged out and their innards snacked on -- sometimes, people are just gone. Spirited away by the otherworldly forest, accosted and dragged to the nearby asylum. 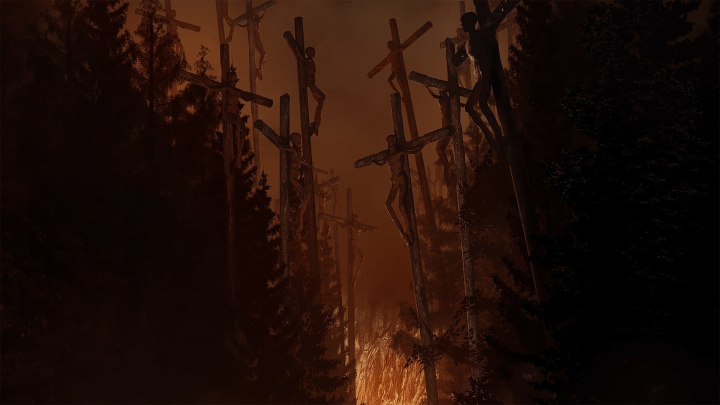 Some of these awful mysteries can be tackled as optional extras in an appreciated touch that allows you to delve into the rural hellscape a little more if you find yourself invested in its macabre tale, or just breeze on past in a rush to the finish line should you prefer. I delved on deeper. Before his untimely death and subsequent devouring, the Mayor had voiced great admiration for the methods of the inquisition. To this end, he had initiated a denouncement system where the townsfolk can report the ills of their peers so they can face judgement. In the hands of someone like Benedek, this is a powerful tool that he can use to smite members of the ghoul cult should they be found hidden in plain sight. Or, if he doesnt like the condescending tone the villagers have taken with him, maybe he can report them on petty, trumped up charges. Such as obstructing the will of God. He is a monk, after all; surely his path is plotted by the Lord himself?

All burnt beneath my wrathful gaze Theres a decent chance youll blow right past this option without ever knowing it was a thing; Saint Kotar wants to reward careful sleuthers who poke and prod at even the worst monstrosities, but not punish those who would rather limit their time spent in foggy Croatian purgatory. Outside of all the unpleasant murder and blasphemy, theres also the clumsy interface, the slow navigation, the occasional background character having to suffer a comically poor voice actor. Genre purists might scoff at many puzzles being based around dialogue progression rather than a malformation of random items littered about and jammed optimistically into pockets. But theres something so grossly captivating about the damned little town that will sucker you in if you let it. Youll leave no tombstone unturned.

If you enjoyed this Saint Kotar review, you're encouraged to discuss it with the author and with other members of the site's community. If you don't already have an HonestGamers account, you can sign up for one in a snap. Thank you for reading!

© 1998-2021 HonestGamers
None of the material contained within this site may be reproduced in any conceivable fashion without permission from the author(s) of said material. This site is not sponsored or endorsed by Nintendo, Sega, Sony, Microsoft, or any other such party. Saint Kotar is a registered trademark of its copyright holder. This site makes no claim to Saint Kotar, its characters, screenshots, artwork, music, or any intellectual property contained within. Opinions expressed on this site do not necessarily represent the opinion of site staff or sponsors. Staff and freelance reviews are typically written based on time spent with a retail review copy or review key for the game that is provided by its publisher.