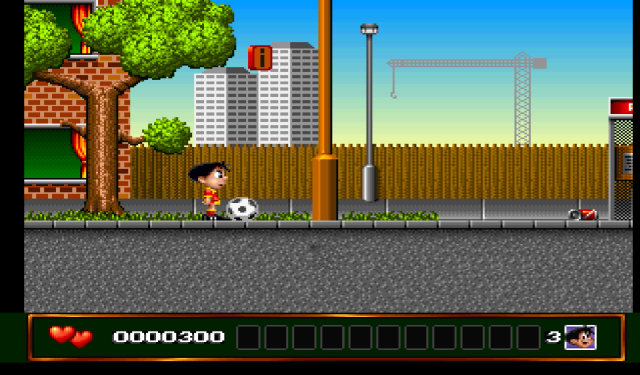 I gotta give the programmers credit for the corny idea and concept of this game; as whacky as it is, it works surprisingly well. This game was ported to the 3DO quite nicely, they used FMV for the intro and the game over screen and it is extremely smooth for the hardware it is running on.

This game has a very European flavor to it, English accent included. Its the day of the world cup and an alien steals the trophy and then crashes onto earth and its up to Soccer Kid to recover the pieces. The game consists of around 25 platform levels filled with action. Soccer Kid has to kick his ball into anything from animals, grumpy farmers, even city workers. The game-play is surprisingly deep, Soccer Kid has about a dozen moves at his disposal, anything from a bicycle kick, hopping off his ball to high jumping and kicking the ball to collect items. The first time I played this I got a few stages in and was frustrated at how complicated the controls were, but then I browsed through the manual and got a hang of the moves and the game grew far more interesting. The game is surprisingly deep but with a little practice you will fit right in. The levels are well drawn but one flaw that I noticed was that the levels seemed to lack variety and could get occasionally repetitive, around every six stages or so you get to face a boss, they are quite a challenge and require good timing to defeat, game isnt a walk in the park, carelessness will get you killed quickly.

As cheesy as the tunes are in this game I still appreciate them despite them sounding so European, I even started humming along off and on. The sound effects are also fitting and sound like they were genuinely thought out and they fit well and for once dont sound generic or like theyve been recycled from another game.

This game was ported to a ton of systems, Kid Kleetz (SNES) Marko (Game Gear) Markos Magical Soccer Ball (Genesis) as well as a few less popular consoles using the name Soccer Kid. The 3DO is probably the best version, as far as features as it was capable of FMV and the others arent. The game-play doesnt make use of the 3DOs capabilities but it doesnt detract from the game overall. With as dry as the library on the console is, this is a needed edition to your collection.

If you enjoyed this Soccer Kid review, you're encouraged to discuss it with the author and with other members of the site's community. If you don't already have an HonestGamers account, you can sign up for one in a snap. Thank you for reading!

© 1998-2021 HonestGamers
None of the material contained within this site may be reproduced in any conceivable fashion without permission from the author(s) of said material. This site is not sponsored or endorsed by Nintendo, Sega, Sony, Microsoft, or any other such party. Soccer Kid is a registered trademark of its copyright holder. This site makes no claim to Soccer Kid, its characters, screenshots, artwork, music, or any intellectual property contained within. Opinions expressed on this site do not necessarily represent the opinion of site staff or sponsors. Staff and freelance reviews are typically written based on time spent with a retail review copy or review key for the game that is provided by its publisher.