The first thing you'll notice about Hope; or How We Survived is that it features a pixelated character in a red coat, a gas mask, and a black cowboy hat, who's also wielding a rifle. This character looks super cool and will possibly encourage you to know more about the game. Then you know more... and know that it's a zombie apocalypse-themed tower defense title taking place in a single location for the duration of your playthrough. Chances are you likely won't want to know more after unraveling those particular tidbits... However, Hope does things a bit differently from the norm, one where the tower defense aspect somewhat takes a backseat. In a way, you can say the gameplay mechanics serve more as a means to help move along its short plot-driven core.

Hope's story begins on a Monday, where the aforementioned figure stands guard at a tower within an unseen fort, the titular Hope. You, as this unnamed, masked protagonist, gazes upon the scenery surrounding the front gate, which includes a cracked road, countless trees with no leaves, and a mountain in the backdrop. Shortly after, a thought-bubble pops up beside you with three options: Bowie, Queen, or the Stones. Regardless of what gets picked, you fail to sing one of their songs, even admitting it. As your character talks on through text, the game audibly presents this as indistinguishable mumbling, much akin to the teacher's gibberish in a Peanuts cartoon. But before long, your lonely ramblings abruptly end; an injured human walks into frame and pleads for help. 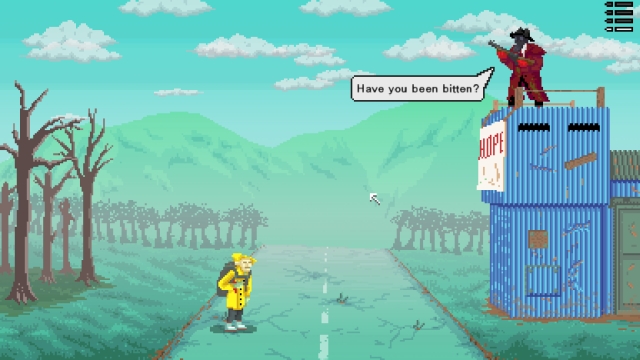 When you two first meet, the game sets up the following scenario: a vaccine exists, the stranger is given the vaccine, and then he has to wait six days before being allowed inside Hope, since that's when you truly get to see if it works. For those six days, he has to sit outside, right underneath your guard position, and wait it out. From here on, the relationship that forms between you and the stranger is essentially the driving force of Hope. You'll chatter, make small talk, and between those sessions, shoot zombie hordes to protect this person. Sounds like an interesting change of pace from your usual tower defense situation, but you begin doubting this process on the very first day.

Of course, the first "stage," Monday, is intended as a set up for the rest of the game, but you can't help worry when the flow moves at a surprisingly slow pace. The "intermissions" between text bubbles feel a bit too long, even when you try speeding them up a little by tapping said bubbles. If anything, this just makes you hope for a tower defense segment to start up; then one starts up and you get super worried. As zombies come marching out from the left side of the screen, you pick them off from the right side with the help of a crosshair, reloading every four shots with your default rifle. The issue with this is that the hordes aren't really hordes, but instead two or three coming out at a time, and shooting and reloading is such a non-issue, especially with unlimited ammo. The urge to just end the game right there is not a surprising one. 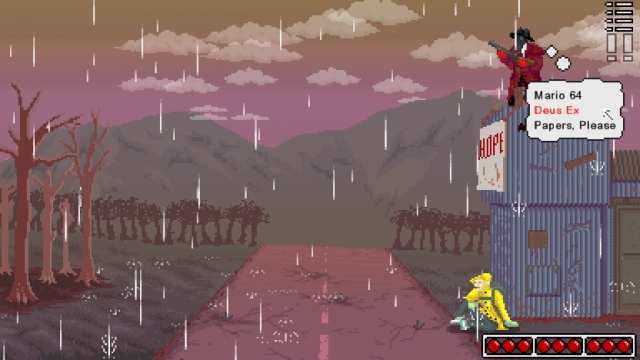 While things might start off a bit too slow for some people's preferences, this feeling doesn't last long. Conversations actually become amusing engagements as you two find out about each other, like where the stranger came from or why your protagonist wears their outfit. That's not to say the conversations are usually fun and lighthearted, as they sometimes veer into bleak and depressing territories, such as the fate of certain characters. Though, it also should be said that a lot of these are steeped in predictable zombie tropes, to the point where mentioning specific tropes will easily spoil parts of the game. If you've read, watched, or played something with a plot that even remotely relates to zombies within the last few decades, the story's "twists" won't shock you.

Before you know it, talk steers right back into more playful topics, so as to get their minds off present day woes. Such examples include favorite movies or game consoles, and whoever wrote the dialogue for these moments played it safe by selecting from known names: To Kill a Mocking Bird, The Princess Bride, and Mass Effect to name a few. But that's fair, since selecting more obscure titles might take a typical player out of the experience. Not stopping there, the tower defense segments have increased in challenge, with more zombies appearing at once, the arrival of zombie chickens that rush, and even zombie crows that zig-zag! These elements certainly create some tension between the now entertaining conversations, but don't think they're on the same level of difficulty as a traditional tower defense title; even when you get extra weapons, your default rifle will do just fine. 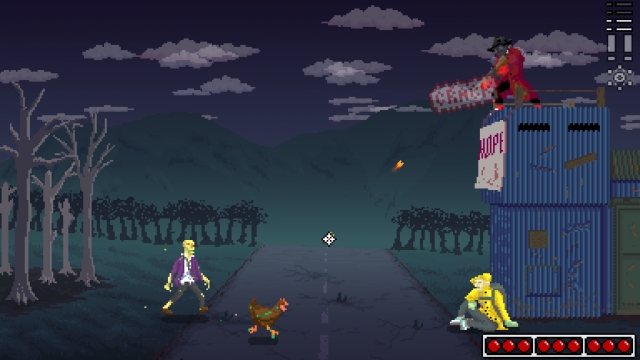 But as noted, this is clearly intended to be a short experience, one where there's only enough content in its story-focused design to keep you entertained for over an hour. Does Hope deliver in that regard? The game is serviceable in presenting a one-and-done predictable scenario where two complete strangers chill and talk in a zombie apocalypse; the conversations get fun at times, but that's about it and intentionally designed so. Now, the game does have multiple endings, and it's commendable the devs even attempted that, but there's not enough variety here to warrant additional sessions. The leisure tempo of the text speed alone would be enough to dissuade extra playthroughs. Hope; or How We Survived, with some very minor pacing issues, succeeds at what it set out to do, but if you're expecting a lot more from either a story or tower defense perspective, look elsewhere.

If you enjoyed this Hope; or How We Survived review, you're encouraged to discuss it with the author and with other members of the site's community. If you don't already have an HonestGamers account, you can sign up for one in a snap. Thank you for reading!

© 1998-2021 HonestGamers
None of the material contained within this site may be reproduced in any conceivable fashion without permission from the author(s) of said material. This site is not sponsored or endorsed by Nintendo, Sega, Sony, Microsoft, or any other such party. Hope; or How We Survived is a registered trademark of its copyright holder. This site makes no claim to Hope; or How We Survived, its characters, screenshots, artwork, music, or any intellectual property contained within. Opinions expressed on this site do not necessarily represent the opinion of site staff or sponsors. Staff and freelance reviews are typically written based on time spent with a retail review copy or review key for the game that is provided by its publisher.