Heres a good way of discovering if youd be interested in playing Hellblade: Senuas Sacrifice. Can you survive the following statement: Hellblade: Senuas Sacrifice isnt so much a traditional video game as it is more of an experience. Its not designed to be fun; its designed specifically to exhaust you, to grind you down and stress you out. It earns its psychological horror tag by focusing hard on the psychological and dabbling with the horror. The world is built on the backs of charred corpses and decorated in skinless cadavers that hang from the ceilings, so its a pretty macabre place. But Senua takes it mostly in stride. Maybe because shes more scared of failing her quest than she is of her gruesome surroundings. Maybe her fear of being abandoned and alone trumps that of the hellscape that surrounds her. It could be that, or It could be that all of the horror that she sees isnt really there. It might all be in her mind. Maybe that makes it worse.

On the surface, Hellblade is the tale of a young Pict warrior delving into the Nordic underworld to recover the soul of her lost love. She arrives at the shores of Hel and is immediately greeted by the disembodied voices of the furies that reside there, who take up permanent residence in her head. Senua hears them throughout, constantly talking over and contradicting each other. Telling her shes doing great while telling her shes bound to fail. Telling her how she needs to push on while telling her shes going the wrong way and shes bound to fail. These voices are constant, whispering just loud enough to be heard or talking loud enough to try and drown each other out. Some seem to want her to succeed; some revel in her failures. 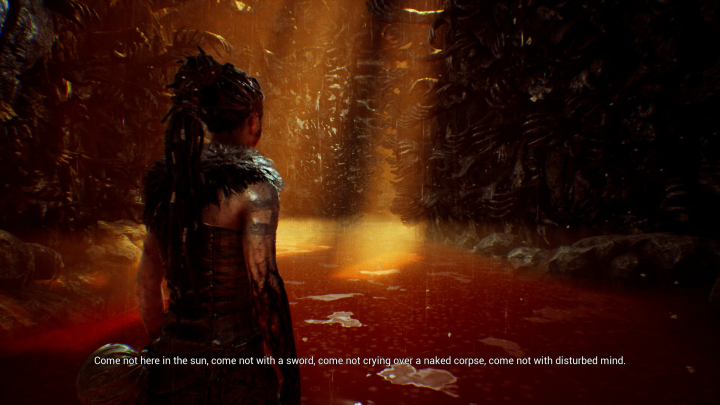 While suggested to be the denizens of Helheim tormenting the girl, under the surface theres a real world issue being explored. Senua suffers from psychosis in a period of history where mental health was often diagnosed superstitiously, and the voices she hears in her everyday life have caused her to be ostracized. Her father, a senior religious figure, believes her infested with a darkness that he seeks to keep the world safe from. Throughout the game, Senua will see flashbacks of her treatment at his hands, of her enforced isolation and her constant berating. It drives her further and further into herself. It makes her see the world differently.

Hellblade takes this mental illness and metaphorically manifests it as the world Senua explores. The voices in her head are presented at the forefront of the experience, captured with binaural recording to give them a sense of direction. Voices can come from behind her, or as if theyre moving past her in mid-sentence. Theyre included naturally in many of the games mechanics, serving as a fourth-wall breaking narrator, or an integral part of combat. Theyll warn Senua of incoming strikes, provide in-battle hints at toppling her most challenging foes, and act as a pseudo health bar. The more panicked and desperate they become, the closer she is to death. Considering Hellblade threatens you early on with permadeath should Senua fall too many times, their panic is well founded.

Does Hellblade really delete your save file and banish you back to the start if youre killed too many times? Probably not, but its just one of many ways Ninja Theory goes out of their way to make your gaming experience uncomfortable. Combat itself is functional but purposefully unspectacular, pitting Senua against groups of opponents, whose numbers often feel a little too large, and whose endurance persistently devolve many battles into a grind. Its to overwhelm you, to panic you into thinking that youre seconds away from death, and that the next death may be the one to bring everything to a jarring end. Its why the demonic Norsemen absorb a few more blows then it feels they should be able to. Its why Senua is bundled to the floor easier than it feels she should be. 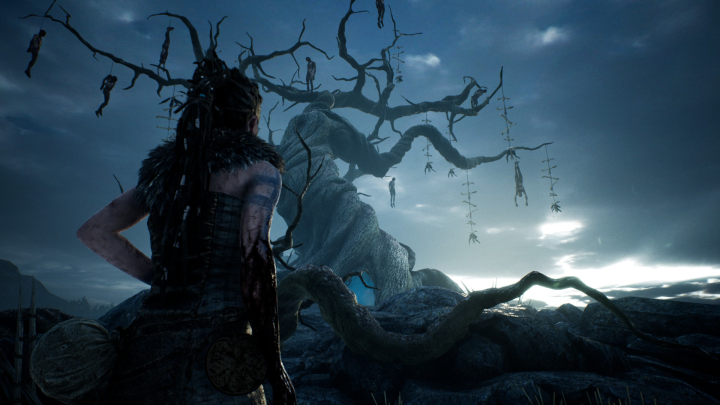 Hel, as a whole, is designed around the varied descriptions offered by sufferers of real life psychosis, who were invited into the studio to help lend authority to Ninja Theorys efforts. So, when the world around Senua cracks and displaces like its been captured in a broken mirror clumsily placed back together, its born from how someone really sees the world around them. Colours saturate, bleeding into each other or splitting apart like a kaleidoscope; images duplicate and overlap each other. These arent saved for cinematic effect or dramatic moments; theyre simply a normal part of Hel that Senua needs to deal with. She also has to hunt down runes hidden in plain sight to advance through periodically locked doors. These runes might be found in the placement of a felled tree, or the shadow cast from a broken gate. On their own, theyre oft-aggravating puzzles that see you staring at the scenery for minutes on end. Taken as more, its Senua drowning in paranoia, interpreting hidden signs that mean nothing to the rest of the world. To her, theyre steeped in importance, the only way to progress through the underworld, her one true path towards redemption.

Playing through Hellblade isnt a fun distraction; its an ordeal. Its less about hitting sweet combos and more about stumbling, dazed and confused, through a world that probably doesnt exist. Theres answers in the madness, but theyre rarely obvious. Theyre elusive and exasperatingly out of reach, and constantly having to reach for them is gruelling. Thats where youre supposed to be, as mentally worn down as Senua, but still dragging yourself forward at the little crumbs of absolution dropped in your path. Theres a flickering light at the end of the tunnel to move towards. But when you get there, you might just find its because the world is on fire.

© 1998-2021 HonestGamers
None of the material contained within this site may be reproduced in any conceivable fashion without permission from the author(s) of said material. This site is not sponsored or endorsed by Nintendo, Sega, Sony, Microsoft, or any other such party. Hellblade: Senua's Sacrifice is a registered trademark of its copyright holder. This site makes no claim to Hellblade: Senua's Sacrifice, its characters, screenshots, artwork, music, or any intellectual property contained within. Opinions expressed on this site do not necessarily represent the opinion of site staff or sponsors. Staff and freelance reviews are typically written based on time spent with a retail review copy or review key for the game that is provided by its publisher.