The original Double Dragon was inescapable. As you walked into arcades, you couldn't advert your eyes of Billy and Jimmy Lee's escapades as they pummeled thugs, jump-kicked towering muscly monstrosities, and elbowed whip-wielding dominatrices to rescue a damsel in distress. With martial arts training in tow, one or two players side-scrolled across city streets, forests, and lairs, inspiring generations of beat 'em ups that followed in its wake. If you wanted to play the game at home, it didn't matter what system you owned since it was ported to everything at the time. However, the quality of each version wildly varied due to several factors, such as system strength, experience of the port developers, or something ridiculous like having only six weeks to work with before the game ships. 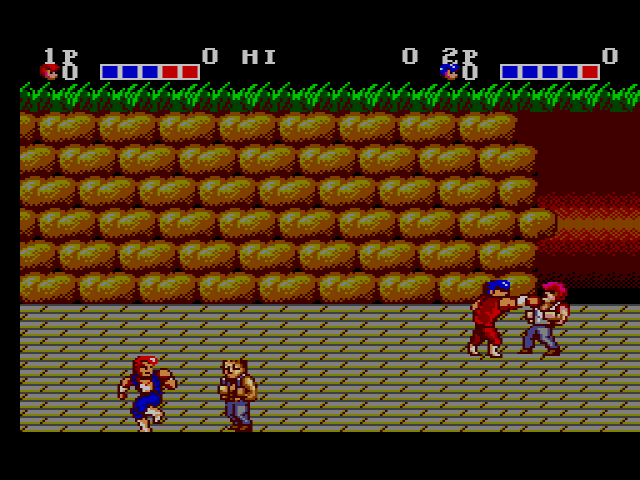 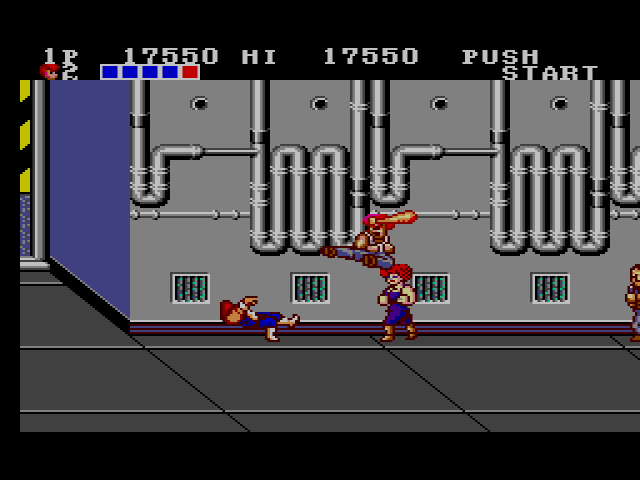 The Sega Master System version in particular is an interesting port, mainly because it's often compared to the NES rendition that was released a few months prior. While not quite arcade perfect, the SMS conversion, on paper, is more faithful to the arcade original. For example, every move is available to use right out of the gate; there's no need to obtain them through leveling up here. But the most noteworthy feature from the arcade, the two-player co-op, has also been kept intact, something the NES version was unfortunately lacking. On top of that, the game runs just fine with two players and three enemies on screen at once, with minimal slowdown at certain parts. Though despite notable differences between the two, perhaps the strangest part has to be how the SMS game, made by different developers, just straight up copies the character sprites from the NES port.

But those are just comparisons, how does the rest of this version stand on its own merits? The game certainly sounds appealing in writing, but once a playthrough is underway, you'll notice something is amiss. As you punch and kick your way through the first wave of punks, you realize the hit detection is off. Like... off-off. Attacking enemies where you think a connection would occur doesn't do anything most times, and instead you must either punch through their bodies and sometimes before with weapons... and hope it works. You're essentially making guesses, all while giving foes an easy opportunity to counter; considering they can knock off a considerable chunk of health with a basic hit, that's no good.

Unsurprisingly, this makes for an irritating and unpleasant experience. In most other titles, specifically ones where people make rough physical contact with one another, there's an understated "marriage" of a successful hit and the reaction that's satisfying when they connect in an appropriate manner; you don't truly realize how impactful something like that is until you encounter abrasive hit detection in a game like this. Is there a way around this mess? Well, in usual Double Dragon fashion, there's one strong move you can exploit, and in this case it's the jump-kick... to a point. Starting at stage three, the majority of enemies require two jump-kicks to knock opponents down, meaning you're more susceptible to receiving a counter attack when landing the first one. 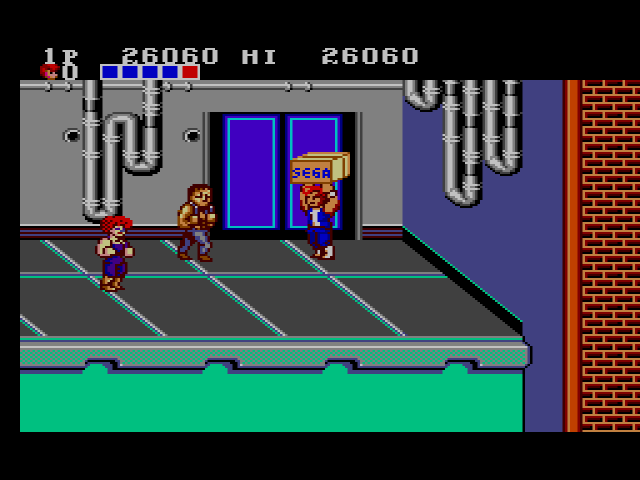 You think these problems would make for a dreadful situation where beating the game is more trouble than it's worth. But this instead brings up another point that's a bizarre burden with a lot of Double Dragon titles: the haphazard difficulty curve. In this version, deliberate choices to make the game hard are cancelled out by a decision to make the game easier. Weird, right? Basically, you have a set of lives and a health meter with five blocks, with a very basic hit from an enemy able to knock off one block. Surely that, coupled with the dodgy hit detection, would make this frustrating. However, this is offset by the fact that you have unlimited continues until the final stage. Now, if the game was fun to begin with, this would be trivial. Sadly, this trivializes the game in a different light: one where the "challenge" of the first three stages are severely downplayed.

But that's the dilemma with this version; the game is too unexciting and jerky to go through properly, with the only decent experience you'll have is if you perform all the "cheap" tactics. And if you want to go the extra distance, you can even enable unlimited continues for the final fourth stage by spin-kicking ten times. It's unfortunate that you have to encourage this type of play for some sort of entertainment value, but that's just how it has to be when the core design isn't good to begin with... Double Dragon for the Sega Master System may have brought the arcade experience home in spirit, but regrettably, the presented problems guarantee that it'll only serve as a minor two-player distraction before you escape to something else.

© 1998-2021 HonestGamers
None of the material contained within this site may be reproduced in any conceivable fashion without permission from the author(s) of said material. This site is not sponsored or endorsed by Nintendo, Sega, Sony, Microsoft, or any other such party. Double Dragon is a registered trademark of its copyright holder. This site makes no claim to Double Dragon, its characters, screenshots, artwork, music, or any intellectual property contained within. Opinions expressed on this site do not necessarily represent the opinion of site staff or sponsors. Staff and freelance reviews are typically written based on time spent with a retail review copy or review key for the game that is provided by its publisher.