Your enjoyment of Road 96 is going to hinge on a few things, but lets get the more controversial stuff out of the way now. Its a political game. Not so much in the way, say, Deus Ex or Metal Gear is political, but more in the way that there seems to be One True Path and, if thats not the opinion you subscribe to, then youre a dick. Its set in the fictional country of Petria, which isnt a particularly nice place to live. Its run by a totalitarian government spearheaded by President Tyrak, and the main thrust of the game is taking a collection of disillusioned teenagers and, one by one, trying to get them out of that mess. Throughout your journey, youre often asked to make choices coloured with three different mindsets; escape the country, vote for change in the country or burn the country down. The problem here is that these choices dont often fit, especially considering the pre-established goals of the nameless teens under your control. They want out, and are already some weeks into that goal before you join them in their journey. From there, you have the chance to change them into naive political flunkies for a secondary party you know nothing about, or angry revolutionaries who want the ruling class to burn.

I dont think theres anything wrong with selling someone on a journey that can change their mindset and opinions, but I dont think thats what Road 96 sets out to really do. Throughout a full runthrough, you take charge of seven runaway teenagers keen to get the hell out, and stumble through a randomised set of circumstances along the way. You have some control over what you may or may not experience and you plot your journey towards the titular Road 96, which seems to be the only exit point from the country. To this end, the game follows a formula; you work through a semi-randomised instance, and then you choose how youre going to proceed on to the next one. 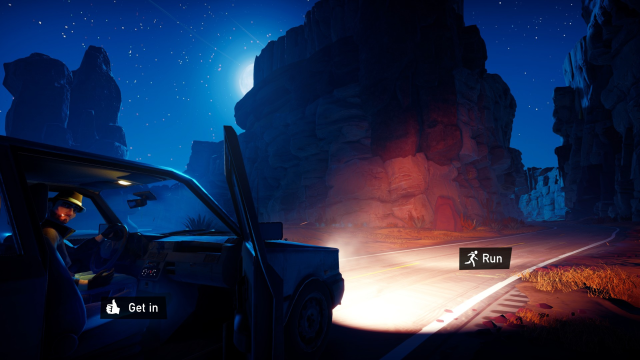 The game works best when its about the journey and puts a lot of effort into trying to nail the smelly teen trying to get by on the roadside aesthetic. It does it really well. You constantly have to worry about the little things like, you know, not dying of exhaustion or hunger, which also ties in with how youre going to make the next step in your journey. By hook or by crook, maybe youve got a little bit of money together, and can take long stretches of travel away by jumping on a bus, or hailing a cab. But this isnt always the case and you may find yourself forced to hitchhike, rolling the dice on whose car you gingerly climb into. Or you can just be the arsehole youre trying to avoid, steal a car and drive yourself. Its safer than forcing yourself to hike long distances - if youve not eaten or slept in a while, theres a very decent chance you are in no state to survive an elongated trek.

I guess thats why I front load the political talk, because the game behind the message is a worthwhile trip, but its hard to focus on that if you spend half your playthrough rolling your eyes. It has this unique little hook where youre not just one character, but seven. But also, you're just one character in a sense because youre the you ultimately controlling your collection of anonymous runaways. Along your trip, youll meet a collection of characters who are always meeting you for the first time while you, the smug fellow behind the monitor, learn more and more about them with each new ward you control. It means a lot of things; maybe the first time you discover a character, you say the wrong things or do something to screw them over, but youre not in their life long enough for them to gain anything but immediate revenge. The next time you find them, its a new you, so they wont hold anything previously done to them against you. 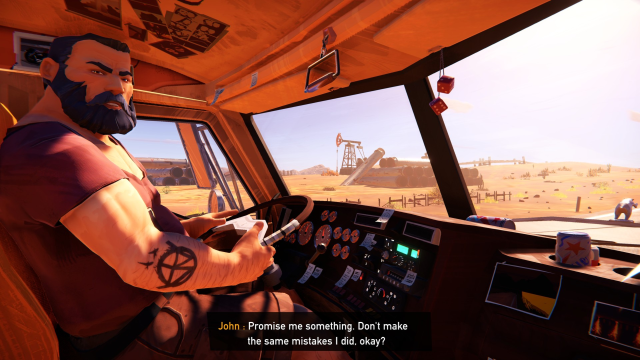 I enjoyed that. I didn't think I would. The first time you meet these people, they dont seem much more than a travelling collection of tropes, and Im starting to think that might have been on purpose. By the time youve spent a little more time with them, figured out their motives or their reasons for being out on the road, they start to become more sympathetic or understandable characters. Sometimes, theyll even mention this kid they met previously who screwed them over hard, or helped pick them up when they were down, and you realise that was you. You did that. That the things you say and the actions you take do have ramifications that ripple through this awful little virtual world youre so desperate to escape. The girl walking the same path as you might tell you she regrets not spending more time with a boy she bonded with when they both crashed at a barely-functioning trailer park. The trucker might tell you about the kid he picked up who had to keep waking him up so they wouldnt die in a fiery collision. The cop might talk about that one girl thats been missing for months now, and how she doubts theyll ever resurface.

Moments like this have weight and value because you can recognise them as moments youve made for yourself. Footprints, little or large, that prove you travelled the path and made some kind of difference. Some come off more forced than others and some flat out work against the journey in order to bolster the message, but its all okay. Road 96 more than anything else, is a collection of moments. Moments you build, moments youre powerless to influence and moments you can do nothing but react to. Theres moments where youre helping someone design an early video game prototype, or getting your arse handed to you at Connect 4, or air hockey. Theres moments where youre trying to talk your way out of someone putting a bullet in your head, or trying to find a way to build and conserve enough energy to overcome obstacles where failure means you die in such a way that no one will ever know. Some endings are certainly more desirable than others, but at least the endings you achieve are your endings. Get across the border, turn back to fight for the homeland, fail miserably and die trying and then build on your deterrents and successes both. Its a bumpy ride at times but Im honour-bound to end on a bad metaphor I found it to be worth the trip.

If you enjoyed this Road 96 review, you're encouraged to discuss it with the author and with other members of the site's community. If you don't already have an HonestGamers account, you can sign up for one in a snap. Thank you for reading!

© 1998-2021 HonestGamers
None of the material contained within this site may be reproduced in any conceivable fashion without permission from the author(s) of said material. This site is not sponsored or endorsed by Nintendo, Sega, Sony, Microsoft, or any other such party. Road 96 is a registered trademark of its copyright holder. This site makes no claim to Road 96, its characters, screenshots, artwork, music, or any intellectual property contained within. Opinions expressed on this site do not necessarily represent the opinion of site staff or sponsors. Staff and freelance reviews are typically written based on time spent with a retail review copy or review key for the game that is provided by its publisher.