Wedged between two polar opposites of expansions, Automatron is perhaps the underdog gem of Fallout 4 that is perhaps better than it has any right to be. There are so many little things Automatron adds to the Commonwealth that I would bemoan its loss, yet I cannot describe one specific trait that makes it feel so great. Playing on Survival Mode with STALKER damage output (and autosaves) that enhances its dungeons is one reason, but I believe there is a simpler one. You cannot knock how much added content Automatron brings to the Commonwealth--however frivolous the settlement stuff is or however minor are the new Rust Devils and robots enemies--and this DLC should be the set standard for the future of Creation Club. Automatron proves you can add a lot with a mini-expansion.

While it may not compare to the heights of Far Harbor or Nuka World, I believe Automatron showcases what Bethesda (and modders) should strive to achieve in the Creation Clubs future. There are many lessons to be learned on how to market to a wide audience without major backlash.

In total, Automatron adds a new power armor and a new exotic weapon, robotic companions (and settlement options), and a simple story centered around facing the Mechanist from Fallout 3 with two dungeons. As a result of all these small touches, not one feature feels skimped out. The robot companion options offer everything from Assaultrons to Sentry Bots and everything mixed in-between; the Rust Devils and new robots like Eyebots and Robobrains add some needed enemy variety to the game; the new Tesla weapon and Tesla power armor are welcomed inclusions to combat; and the two added dungeons have perhaps some of Fallout 4s greatest battles with a lot of breadth in spite of their brevity. There is something bound to appeal to anyone who enjoys Fallout 4, and if you play this game with more punishing combat (for you and for enemies) it can be some of the best moments. 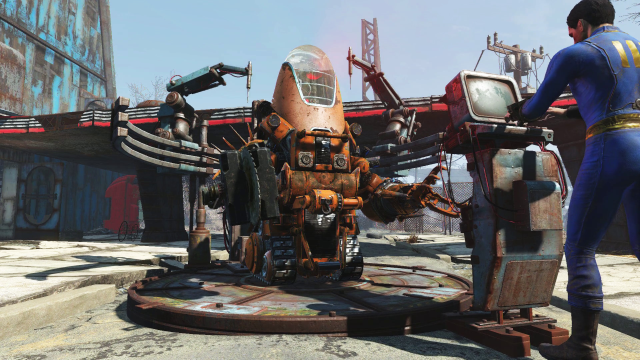 This lesson slowly appears to be dawning on Bethesda with the trend of Fallout 4. Instead of individual products, the CC has gravitated towards bundles: Armor/Weapon/Quest bundles (DOOM or Tunnel Snakes), Settlement/Gameplay Changes/Quest (Slocam Joe), and even the cosmetic options are best when bundled together (Modular Backpacks and Faction Paints). However, these additions never reach the heights of Automatron in their appeal, thematically or value as content. If every item featured Automatrons two dungeons and mini-campaign adventure, a new gameplay feature/ /companion option, and new settlement options, then the image of Creation Club would be improved.

Aside from being a tangent piece for Creation Club, what does Automatron add to the Fallout 4 experience? The content itself is adequate as the size of this expansion is around the same of Fallout 3/NVs individual expansions, which goes to show how much is added to the two proper expansions that followed. Its evident Automatron was created for Bethesda to test the water with adding DLC to the game for market and for technical reasons, so they started out with a simple idea of integrating new content and features with old ideas, a trend that is all too evident from F4s DLCs.

As someone who doesnt like Fallout 3 mechanically, it does not bother me as much they reinterpret the Mechanist as I never played along enough to experience his story, and this story is far different from that adventure. Instead of being a simple side-gag story between the Mechanist and the Antagonist, the narrative of Automatron follows you locating the Mechanists lair and discovering why someone who claims to be a hero is tormenting the commonwealth. The campiness of the adventure adds a nice poetic irony to the story similar to the experiments in the Vault as the Mechanists minions are also a scientific experiment gone awry. The moral dilemma is based on a simple misunderstanding of cold logic, but the game allows you the freedom to be the judge or the executioner (or the Shroud) to the Mechanists actions. The game even allows you to experience that dilemma the Mechanist faces--in a relatively small degree-- with the settlement features. To criticize its formulaic the hero lives long enough to become the villain trope would miss the point that the story is not the main focus, but the lore added brings a nice sober reality to a comical situation. 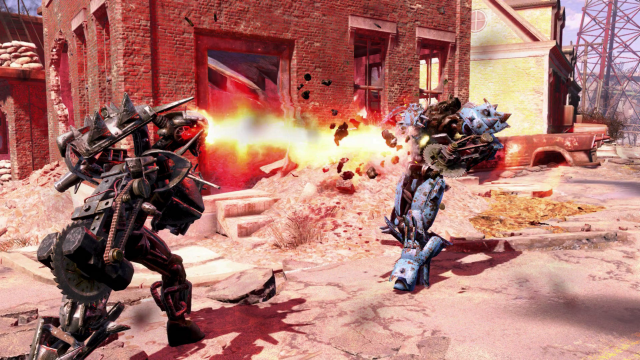 In addition to the story of the Mechanist, Ada herself is an enjoyable, if bland, companion who borders the line of artificial intelligence and simple robotics like the others. Despite the lackluster personality, the ability to make the Ada of your robot dreams is an affective mechanic that builds long-term attachment. Whether that is a half-body Mr.Gutsy on steroids or a literal tank-girl without those meddlesome marsupials. Her inclusion also has the unintended, though beneficial to the narrative, effect that her personality muddies the water as to whether to accept Synths as human beings if an AI like herself can imitate one so well. Her role as a character feels like a missing link to the adventure that better explores the factions motivations from a new perspective, and her journey to learn either the stone-cold justice or the value of redemption from mistakes makes for one of the better companion quests.

While I know not everyone will agree with my assessment of this mini-expansion, I do feel like whatever passing interest you may have in Automatron will be sated if you try it. Again, its difficult to pinpoint one specific thing the DLC manages to achieve that makes it a must-buy, but as a whole you may be pleasantly surprised what Automatron can achieve. Disappointing as it may have appeared when Automatron initially launched, now in the post-mortem of Fallout 4 it feels like the hidden gem under all the controversy more people should experience. This may not be the greatest adventure of the Commonwealth but it one of the most genuine tales that is worth returning to experience.

If you enjoyed this Fallout 4: Automatron review, you're encouraged to discuss it with the author and with other members of the site's community. If you don't already have an HonestGamers account, you can sign up for one in a snap. Thank you for reading!

© 1998-2021 HonestGamers
None of the material contained within this site may be reproduced in any conceivable fashion without permission from the author(s) of said material. This site is not sponsored or endorsed by Nintendo, Sega, Sony, Microsoft, or any other such party. Fallout 4: Automatron is a registered trademark of its copyright holder. This site makes no claim to Fallout 4: Automatron, its characters, screenshots, artwork, music, or any intellectual property contained within. Opinions expressed on this site do not necessarily represent the opinion of site staff or sponsors. Staff and freelance reviews are typically written based on time spent with a retail review copy or review key for the game that is provided by its publisher.