Tokyo Xanadu eX+ bears all the hallmarks of the (A)JRPG and then some. It has this weird fascination with making sure it ticks as many of its genres anime-inspired tropes as it can. Theres a world-ending catastrophe afoot, and the only people who can stop it are a bunch of school-aged teenagers wholl save the day with the power of friendship. Theres a stoic main character, a tsundere female counterpart, an adorable childhood friend, a violent delinquent hiding a heart of gold, an antisocial child genius who prefers the online world to the real one, and so on. One by one, theyll discover unbreakable bonds which not only teach them valuable life lessons (mostly based around friendship), but also make them a much more attractive remedy to Armageddon than the worlds military. This isnt a snarky exaggeration; theres a literal scene where the army shrugs and says this is beyond us; better send in that preppy collection of schoolkids then lurk around in the background and try to look busy.

It sounds awful, and its certainly unbearably twee at times, but Xanadu pulls it all together into something resembling a success through sheer willpower. Thats to say it takes its clichéd collection of kids and invests ridiculously hard in their development until you either start caring, or are buried alive beneath it. To that end, the social lives of Kou Tokisaka and crew finds itself under a lot of focus throughout. Despite being a full time student with an overabundance of part time jobs, Kou still finds time to neurotically explore his hometown and converse with its inhabitants. For a lot of them, he even keeps a mini-diary of sorts on his smartphone which updates the profiles of the people around him every time he finds out something new about one of them. 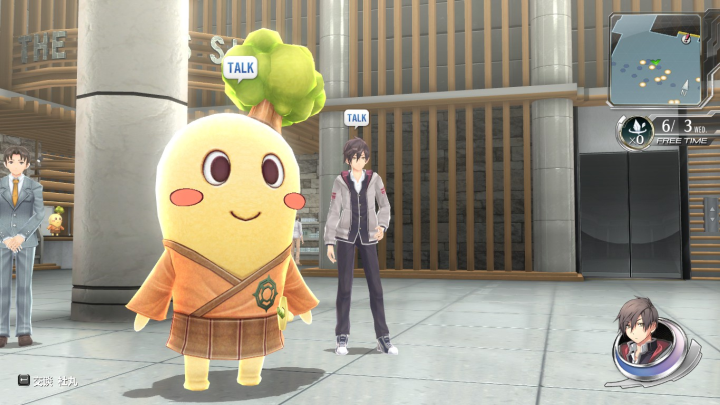 Some examples: Takashi is a rising track star, but does not come from a particularly affluent family. A few years back, they scrimped to buy him new running shoes which he treasures, despite how quickly they became obsolete compared to more modern offerings. Tanabe is one of Kous teachers, and has an abysmal dating history. He keeps trying to ask the school nurse out, but always finds new ways to sabotage himself. You can always find Nodoka lurking around the student council offices where shell angrily tell anyone wholl listen of her dangerous obsession with the student present, who she worries will have her precious time wasted by the schools collection of icky boys. Asuka Hiiragi, Kous class president, is a member of a surreptitious organization who battle the supernatural threats that were secretly the previous cause of Tokyos decimation.

Some of these are more mundane than the others, but they all matter to Kou. When Takashis shoes are misplaced, he volunteers to help search for them. When Tanabe wants to complain about his latest romantic failure, Kou will begrudgingly lend an ear. When he sees an underpass wall tear into an ethereal portal leading to another world and suck Asuka into its depths, hell sure as hell follow her. If she dies in there, he wont be able to complete her bio on his phone, after all.

The tears lead to The Eclipse, a collection of pocket worlds filled with violent little monsters known as Greeds. Greeds are constantly trying to bleed through into the real world, preying on the emotions of unsuspecting folk to try and fuel their escape. Its Asukas job to enter these Eclipse worlds as they appear, and slaughter all the Greeds inside before they become strong enough to have another pop at demolishing Japan. But Kou isnt to know this and, in chasing the disappearing girl into a magical hole in the wall, he finds himself unwittingly tied up in interdimensional devil slaying. But thats okay! In a bit of a departure from the normal labyrinthine dungeons Nihon Falcom are better known for (looking at you, Ys!) most of Ex+s crawls are 20-30 minute affairs. For the most part, you run through a collection of cannon fodder monsters, do a light spot of puzzle solving and/or platforming and then take on a boss fight. I can afford to be a little flippant about the dungeons themselves, though I appreciate their brevity, because you can just bust through them. I dont have that luxury when it comes to the bosses. Theyre quite an extravagant assortment of brutes. 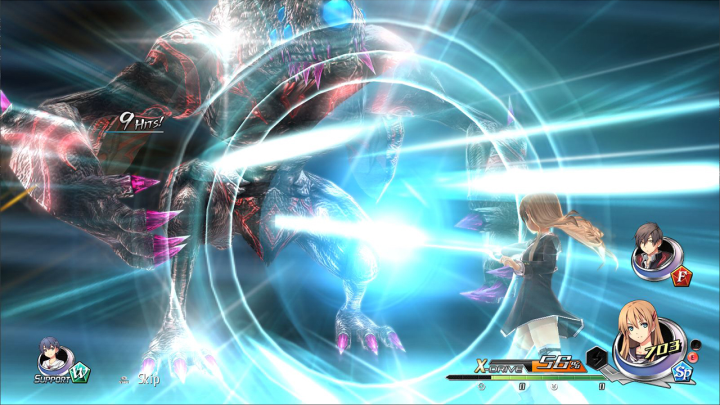 For the most part, the dungeons themselves seem to exist as prep work. You can experiment with different attacks, gather resources and power up your hardest hitting abilities in anticipation for the massive fight at the end. Though he starts his adventure as a lowly rookie, Kou will progressively build his arsenal as he progresses further and further into the heart of darkness. Hes pretty dangerous, even at base, being able to link together melee chains, use magical range and aerial attacks, or bust out heavy strikes after a short charge-up period. That will get him through the first few eclipses, but soon hell need to store the ability to summon an extra teammate into the battle, or launch into blistering combos with colleagues in support roles. There's a few teammates to cycle through because every chapter introduces a new party member into the fold. Often begrudgingly.

But Tokyo Xanadu eX+ manages to make it work. Though happy to cycle through the expected tropes, it doesnt let itself become tied down to them. Kous sometimes presented as a stoic loner, but this is challenged by his small tight-knit social circle at school, mostly made up from people who have known him most of his life. They have long since accepted his herculean efforts to ensure he has as little free time as possible to accommodate them in. But he tries to anyway because he doesnt like letting them down; it takes this time to humanise him. He doesnt have a pre-existing relationship with Asuka other than they attend the same class at school, and watching the two clumsily try to figure out how to be around each other sometimes gets a heavier focus  and is more interesting  than the existence-threatening danger playing out around them. Its not the relationship youre expecting; its never hostile or demeaning - its just awkward. Kous trying to come to terms with the existence of genuine monsters while Asuka has to struggle with the danger shes putting on what were literally normal schoolkids just a matter of days ago, as well as coming to terms with working with other people.

Sure, in between all this will be a rousing speech or seven about the power of friendship, but its really unmitigated violence that will save the day. Tokyo Xanadu eX+ mostly meanders only at the right times, letting you invest in as much or as little of its social structure as you can be bothered with. Theres no reason you have to try and fill all the bios in your smartphone (and, in fact, you cant without a New Game + run!); theres no reason why you have to revisit the shops every chapter to see if theres new recipes you can try and perfect and feed to the schools infamous glutton. You dont need to visit the capsule machines to collect cat-themed keychains to bribe an unapproachable girl, or help street artists hunt down their perfect models. In comparison, dungeon exploration is an appreciated contrast; everything is tightly coordinated and you can just focus on kicking all the arse. Even to the point where revisiting to build levels or mine resources is transitory enough that it rarely feels like a grind. 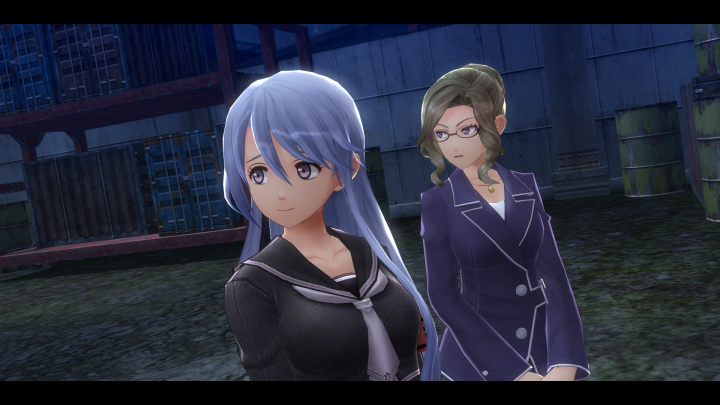 Short isnt the same as bland, though. Some levels introduce traps like swinging scythe blades, disappearing platforms or rolling boulders. Some routinely seal off the area youve entered and wont let you out until youve vanquished the overclocked Greeds that have been waiting for you. All, though, have that one big boss waiting for you at the end. The very first boss is a lumbering cyclopean ogre that moves around with a grace that belies its massive size. Also, it can hurl lightning at you. Also also, it can shoot shockwaves through the entirety of the arena, leaving no safe corner for you to cower in. The second boss is a gigantic harpy who pelts you with powerful long range attacks giving you only little pockets to steal close enough to strike. The third is a golem that can spin its huge girth around a bright red core that sits in its middle. Also, the core shoots lasers. The next is a nightmarish phantom that has a stun attack, which itll use to stick you in place, then pound you with a huge ground smash attack. Thats when its not burrowing underground or pelting you from afar with heat-seeking bolts. Contend with this well enough to get close, and itll summon a shield to migrate your offense. Also, the obstinate bastard will actively dodge your attacks.

They get progressively harder to handle, but you're given all the tools youll ever need to succeed. I mean, your party actively grows every chapter; thats a lot of weaponised friendship on your side.

If you enjoyed this Tokyo Xanadu eX+ review, you're encouraged to discuss it with the author and with other members of the site's community. If you don't already have an HonestGamers account, you can sign up for one in a snap. Thank you for reading!

© 1998-2021 HonestGamers
None of the material contained within this site may be reproduced in any conceivable fashion without permission from the author(s) of said material. This site is not sponsored or endorsed by Nintendo, Sega, Sony, Microsoft, or any other such party. Tokyo Xanadu eX+ is a registered trademark of its copyright holder. This site makes no claim to Tokyo Xanadu eX+, its characters, screenshots, artwork, music, or any intellectual property contained within. Opinions expressed on this site do not necessarily represent the opinion of site staff or sponsors. Staff and freelance reviews are typically written based on time spent with a retail review copy or review key for the game that is provided by its publisher.