In case you haven't deduced that the game's title gave away the concept... twice... RogueJack: Roguelike Blackjack is a "roguelike" product that uses Blackjack as its central gimmick. Based within a fantasy setting featuring the likes of giant spiders, ghosts, and goblins, you must travel inside a "cave," floor by floor, to unearth its many secrets and treasures. As you move about said cave, which is designed more as a dungeon in the game's overhead, minimalist 2D presentation, you do so square-by-square in a turn-based manner; whenever you make a single move, most randomly-placed enemies move in response, normally towards your player-character. When a foe eventually makes contact, a battle will commence where you and your opponent break out playing cards.

You haven't lived until a hobogoblin attacks you with a ten of spades and a nine of hearts. 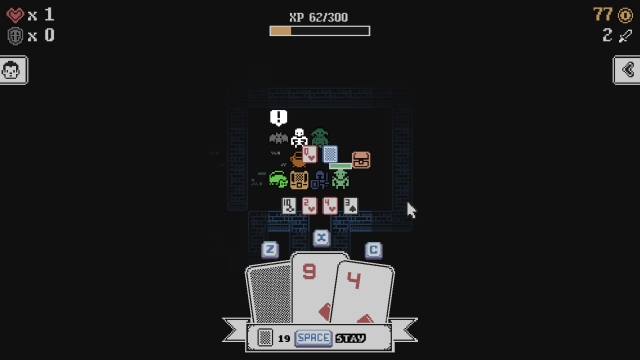 Now the thing about games with "roguelike elements" is that they are likely to induce an eye-roll by some, since so many games nowadays like to throw out that term to help sell a product. However in RogueJack's case, insertion of Blackjack into a roguelike environment feels surprisingly natural. The basis of a roguelike is chance, either gambling on an outcome that might come or being punished severely on a gambit that failed. What happens in Blackjack? The goal is to reach the number 21, or as close as possible, with as many blind cards as you can pull without going over, vying to outnumber your opponent who's doing the same thing. You're constantly taking chances, hoping for a win every time you perform a gambit.

While there are specific tactics that can be used when pulling a single blind card in a normal game of Blackjack, RogueJack has modified certain aspects to better fit its roguelike environment. When you're playing for the first time, the likelihood of failing a battle is huge because every card you grab is a blind pull; thankfully, every loss only takes one hit from your default three-hearts meter. But by gaining abilities through leveling up, not only will you be able to see a card before pulling, there's now two you can pick between, with the second still being blind. Certain weapons found in chests and randomized item closets can also aid, such as a weapon that grants a 10% chance of a blind card being flipped. These abilities can help push the probability of victory in your favor. 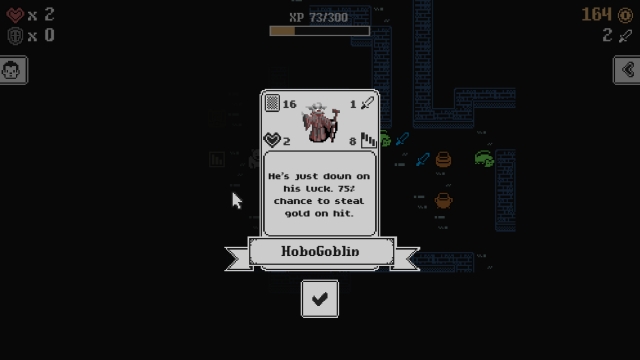 Say you begin a battle with a pair that adds to eight and you look at your two potential pulls, both being visible thanks to chance working in that moment. One potential pull is a Queen, placing the overall count at 18 if selected, with the other being a three, which will put you at 11. You go with the latter, because there's a probability that the next selection will have a 10 card, landing you on 21. But why take this leap? Because in RogueJack, landing on 21 counts as a critical hit, which is vital against enemies requiring multiple matches to defeat; now you got rid of a major nuisance in one go. However, you might get placed in the opposite spectrum, ultimately dying against a lone enemy. But you're willing to take the risk, since every enemy defeated gains you experience. Every weapon traded is experience. Every chest you open might have poison, but it also might have a vase of experience.

Anything that will get you closer to the next level is a worthy endeavor, as it will net you an extra heart, or three cards to pull from, or a higher chance of a blind card being flipped. Of course with this being a roguelike, there's consequence: if you die before leveling up, you begin the first floor with no experience. All's not lost, and this is where you really need to use your brain; "lost" experience actually remains on the floor where you died, making it retrievable. But do you want it back? Do you want those measly 32 points on the ninth floor? Back on the first floor, you're given the option to completely remove them and have a redo. In this scenario, you could potentially gain more points, like 54 on the sixth floor. Now you can choose to die, work your way back to the sixth floor, and add those 54 points to your current count, letting you get closer to leveling up before reaching harder floors. 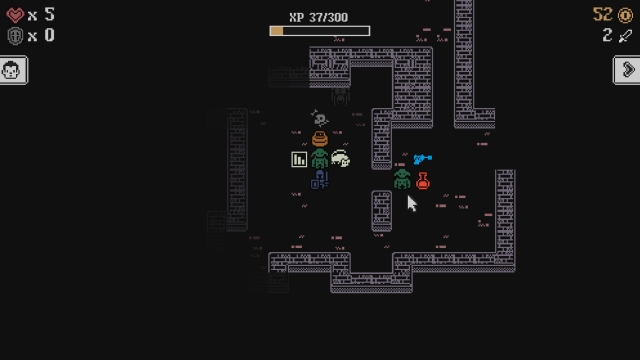 Granted, everything explained essentially conforms to a typical roguelike playthrough. But not once does RogueJack hide this fact, pretty much letting the two main aspects sell themselves in something that functions well together in an earnest presentation. Suffice it to say, if you like roguelikes, Blackjack, or both, this is something to check out, as long as you're not expecting something amazing, special, or groundbreaking. However, this is also a good recommendation for potential newcomers to roguelikes. It's not overwhelming with other concepts and mechanics, giving players a straightforward exhibition of the genre, and doing so with Blackjack, which in itself is a very accessible and approachable game. Just be willing to except that, thanks to RNG, you might lose to a bear holding five cards adding up to 21.

If you enjoyed this RogueJack: Roguelike Blackjack review, you're encouraged to discuss it with the author and with other members of the site's community. If you don't already have an HonestGamers account, you can sign up for one in a snap. Thank you for reading!

© 1998-2021 HonestGamers
None of the material contained within this site may be reproduced in any conceivable fashion without permission from the author(s) of said material. This site is not sponsored or endorsed by Nintendo, Sega, Sony, Microsoft, or any other such party. RogueJack: Roguelike Blackjack is a registered trademark of its copyright holder. This site makes no claim to RogueJack: Roguelike Blackjack, its characters, screenshots, artwork, music, or any intellectual property contained within. Opinions expressed on this site do not necessarily represent the opinion of site staff or sponsors. Staff and freelance reviews are typically written based on time spent with a retail review copy or review key for the game that is provided by its publisher.