When I asked my seven year old, Who is Kirby? she responded with this:

Kirbys a strange round thing with triangle arms for some reason and he can steal bad guys swords and lasers and things. And he can turn into a balloon!

Despite only having played the first few levels of Kirbys Adventure, she had come to the same thesis that most other players do: Kirbys defining characteristic is his ability to copy foes. To her, it even eclipsed inhaling and swallowing them. It then comes as a disappointing surprise to modern players that Kirbys first title, Kirbys Dreamland, lacks this signature copy ability.

Nearly all retrospective reviews call Dreamland simplistic. This is accurate and not in a demeaning way either. According to its Masahiro Sakurai, Dreamland was designed from the outset to be a game that anyone could play. The idea was to build art around a concept that could appeal to all age groups. Dreamlands original name Twinkle Popo just sounds adorable. The character sprite that became Kirby was initially a placeholder for Popopo, but the charm of the placeholder design enamoured itself with the development team and it eventually became the final sprite. The character was just simply shapes, something that even young children would be able to reproduce with some construction paper and a few crayons. The cute Popopo name was dropped based on discussion with Nintendo of America though--Dreamland was a game that everyone was intended to play and the name Popopo was not expected to resonate well with American children.

Anecdotes like this tell more than just an interesting story about Dreamland. It was always intended to be a game that anyone could play and all facets of the game are based around this. For example, one of the core mechanics since the games inception was Kirbys ability to fly. This leads to the natural consequence that Kirby is extraordinarily floaty for a platforming character. Falling down a pit--a fundamental threat in nearly every side scrolling game--is no longer significant. To even call Dreamland a platform game seems like a stretch since thats not a necessary skill to complete the game. Timid players can simply float around or away from hazards until they feel comfortable enough to engage them--in fact, this is exactly how my daughter tackles the game. Even the final boss can be floated over indefinitely until the player has sufficiently learned the pattern or sees an opening that they are willing to risk. 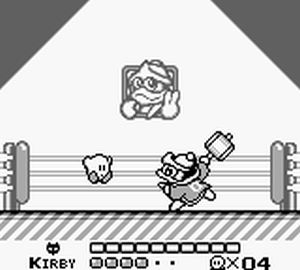 You can just fly over this guy for hours and that seems to be intentional. Fun fact: DeDeDe was a play off PoPoPo.

Dropping the time limit for levels was another decision aimed at making the game more accessible to everyone. Without a timer in levels, the player is free to float around at their own place, playing as cautiously as they see fit.

Since puffing up like a balloon is how Kirby flies, inhaling enemies was a natural extension of this power. Gaining powers through inhaling objects was an idea that floated around for Dreamland but it did not come to fruition until Kirbys Adventure. Its not hard to imagine why either. Kirbys Adventure (Dreamlands NES sequel and the first game in the series to feature copying enemy abilities) is an extraordinary complex work of software. With so many powers and different ways they could affect enemies or the environment, the copy ability is very sophisticated. Dreamland already has fairly complex physics that were tricky to get right so its no wonder that task was left to the larger dev team and more powerful hardware.

Dreamland ends up being a nearly perfect expression of a game that anyone can play and enjoy. The way Kirby controls feels very natural. While Kirby handles differently when puffed up with air and flying, holding an enemy in his mouth, or in his default state, they are not so different (or too similar) as to throw off the games rhythm. His movement feels fluid and Kirby is one of the easiest characters to control in a Gameboy title.

The same simplicity applies to Dreamlands five levels. Each level has a unique theme that builds on what the play already knows, introducing new gameplay simply and plainly. Each level feels new and distinct but never out-of-place or surprising. For example, there is a boss that plays like a shooter, but flight is already an integral part of the game and the shooting power was introduced in the previous stage so the segment doesnt come off as strange (like it does in something like Super Mario Land).

The backgrounds in each level are gorgeous works of pixel art. In Kirbys Adventure, the backgrounds were intended to be pretty enough that you could simply look at them on their own and enjoy them. Maps in games were usually designed by someone who specialized in game maps, but in Kirbys Adventure the maps were drawn by a graphic artist first and then interpreted and implemented by the map programmer. It seems likely that the same workflow was used in Dreamland as well since the maps are brimming with details and personality. From the very first screen until the end credits, the screen is just wonderful to look at. 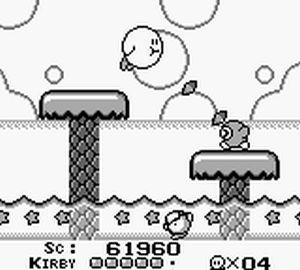 Jun Ishikawas soundtrack fits perfectly with the stage art. It sounds like candy apples transformed into music and then topped with cherry beeps and boops. There isnt a single dull song in this game. 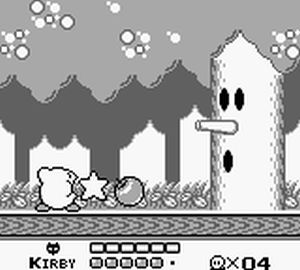 If youve played Kirbys Dreamland, you can probably hear this screenshot.

A young player like my daughter will find Dreamland challenging but manageable for a few levels, and a sizable accomplishment to beat. Experienced players will be able to breeze through the game in 15-20 minutes and have a good time. This difficulty is in-line with the games goal of being playable by anyone, but thats not the full experience. After beating the normal game, the player is given a simple-to-remember code for an extra game.

Extra game turns Dreamland into a nightmare. It isnt some lazy oh look, you can replay the game but its harder like Super Mario Bros. Kirby is still slow and floaty, but while the world around him is just as slow in the normal game the extra game feels like Kirby is stuck in bullet time while everything else is at regular speed.

Inhaling enemies in the extra game is a commitment. The normally benign animations for quaffing foes leaves Kirby vulnerable to the more numerous and faster challenges of the extra game. Enemies have been systematically replaced and their behavior modified in devilish ways that seemed designed to thwart experienced players. For example, enemies that previously moved in a straight horizontal line that could be easily jumped over now change their trajectory up or down based on the players position, crashing right into them. It feels like the dev team watched play testers and put enemies directly in all the wrong places. Bosses have new attacks that seem intended to throw off the timing of players that had the previous pattern memorized. Its practically a new game.

For players that are able to complete the extra game, a second code is provided after that to create a custom game, changing Kirbys health and life count. This can be used in conjunction with the extra game to create a no hit, single life white knuckle flight with death. Or a breezy walk. Your choice.

The two extra modes help round out the difficulty so that the game can accommodate plays of any experience level. The only feature that Id welcome here is a stage select code, to practice smoking the boss gauntlet in the final stage.

Simple is a great way to describe how Dreamland plays, but in a good way--more like the Japanese concept of shibui than the elementary meaning many modern players seem to imply. Dreamland is on the beautiful end of simplicity, seated with the likes of Dragon Quest and Tetris. To compare its simplicity to successors in the Kirby series seems unfair. Once players get over the fact that yeah, you cant steal an enemys powers, theyll find one of the most expertly crafted experiences on the Gameboy, with charm, details, and simplicity that makes it stand out from the rest of the games in this series.

If youve written off Kirbys Dreamland as a game that was surpassed in every way by its sequels, dont do that. Its a beautiful, simple-by-design, and wonderful game on its own, and one that--when taken on its own--does surprisingly stand the test of time.

If you enjoyed this Kirby's Dream Land review, you're encouraged to discuss it with the author and with other members of the site's community. If you don't already have an HonestGamers account, you can sign up for one in a snap. Thank you for reading!

© 1998-2021 HonestGamers
None of the material contained within this site may be reproduced in any conceivable fashion without permission from the author(s) of said material. This site is not sponsored or endorsed by Nintendo, Sega, Sony, Microsoft, or any other such party. Kirby's Dream Land is a registered trademark of its copyright holder. This site makes no claim to Kirby's Dream Land, its characters, screenshots, artwork, music, or any intellectual property contained within. Opinions expressed on this site do not necessarily represent the opinion of site staff or sponsors. Staff and freelance reviews are typically written based on time spent with a retail review copy or review key for the game that is provided by its publisher.