In 1996, Pokemon Green and Red almost single-handedly injected new life into the decrepit nearly decade-old Gameboy and kicked-off what became the most valuable multimedia franchise in history. In 1997, the first generation Pokemon games outsold Final Fantasy VII. And much like the wave of RPGs that flooded Playstation after Final Fantasy VII, there was a stream of flatuent Pokemon-clones smearing themselves on Gameboys . These games would latch onto something like monster catching, trading, 2-player battles, releasing two seperate versions of the same game without reason, or some other feature of Pokemon, and they were rarely good.

The comparison to Pokemon is a common slight that Dragon Warrior Monsters has endured since its release and will likely never shake off due to its timing, platform, and the contemporary experience with the series at that point. Its also a comparison, however, that gives undue credit to Poke-mania and misses just how much of an evolution Dragon Warrior Monsters is of the existing entries in the series. It is, in truth, a game that very well may have been made even if there was never a Pokemon.

Lets start with the story. Dragon Warrior Monsters is a prequel for two characters that appeared in Dragon Quest VI, Terry and his sister Milly. With Dragon Warrior still being a niche series in the North American market and Dragon Quest VI never being released outside Japan (a decent unofficial translation didnt come around for several years) its no wonder that players didnt know this was a spin-off of a game from 1995. In Dragon Warrior Monster, Terry and Milly are children who become stuck in the magical kingdom of Great Tree. Terry is persuaded to enter the Starry Night Tournament, where if he wins then he is conveniently granted a wish, such as returning home with his sister.

The Starry Night Tournament is an arena where monsters that Terry has befriended are pitted against monsters trained by NPCs. Herein lies another Dragon Quest connection. Like the final half of Dragon Warrior IV, the player cannot directly control monsters, but instead give tactical suggestions to AI-controlled companions. This system is greatly expanded in Dragon Warrior Monsters. Tactics can be set for individual monsters, and depending on which tactics are used the monsters AI will permanently adapt its behavior, becoming more willing to use certain types of spells and abilities. This information is exposed to the player via the monsters personality.

There is quite a bit of nuance to this. For example, In a particularly difficult arena fight, I couldnt get my one monster to cast Surge--a spell that healed all status effects on the party. If it would do this, Id win easily. The solution was to practice with this monster and select the defensive tactic, which altered the monsters personality to be more willing to cast the necessary spell. The reverse applies to strong attack spells--you need a monster to be more aggressive in order for it to cast those spells in the arena.

There are other properties that factor into how a monster acts in combat, such as its wild value (the higher it is, the more likely the monster is to ignore you). In non-arena combat, you can give direct orders to monsters (such as use this specific spell) but doing so weakens the monsters ability to fight on their own in the arena. Since completing arena fights is the only way to progress in the game, the player needs to understand the nuances of the AI-directed combat, using the ability to give direct orders to very specific situations.

Outside of scripted arena fights are travelers gates, procedurally generated worlds where the player can grind and find new monsters. Herein lies another Dragon Warrior connection--grinding. Each Travelers gate looks mostly the same, with each gate having different monsters that can be encountered, a different number of procedurally generated floors, and a different boss at the end. These bosses are often reprisals of bosses in Dragon Quest history and often require a light puzzle to be completed before they can actually be fought. The fact that the player can actually recruit many of these bosses makes slogging through travelers gates worth the repetitive grind. 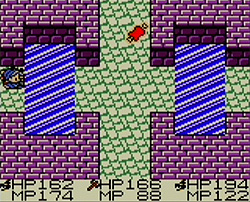 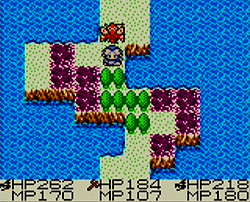 Travelers gates offer procedurally generated content, but they are repetitive and look mostly the same, varying only in the number of floors and monsters that can be encountered.
Recruiting monsters was not a revolution introduced by Pokemon Red and Green. Demon recruitment and fusion was a core gameplay innovation in Digital Devil Story: Megami Tensei (1987). In 1992, Dragon Quest V introduced a monster recruitment system into the Dragon Quest series. Certain monsters (42 of them) would randomly offer to join the party after being defeated in battle. These monsters would stay with the party and functioned as additional party members that could gain experience and level up. In Dragon Quest VI, monster recruitment was expanded further and a Monster Master character class was added to the game. 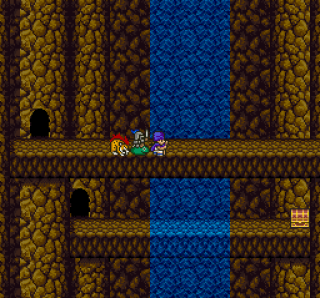 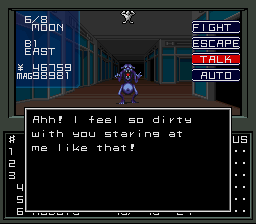 Monsters recruited directly from battles are limited to low levels and will only obtain 3 skills unique to that monster. To truly break this game, you need to breed monsters. Yes, you can force a slime into marriage with a dragon. Thankfully, the details of these unions are not shown to the player. When two monsters mate, they run off, leaving behind an egg with a new monster that will inherit the strength and skills of both parents. 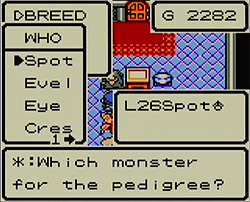 Breeding is the only way to obtain most of the games 215 monsters.

For example, suppose you force a MadCandle and a MiniDrak into an unholy union. Youll lose both of them, but be left with a level 1 Swordgon, a monster with much more potential. Not only are its stats significantly higher than a wild Swordgon, but it can obtain higher levels and eventually learn all of the skills that its parents had. This means valuable skills like HealUsAll can be passed from parent to child across generations.

There are no words to describe how addicting obtaining new monsters can be. Everytime you stumble upon a breeding combination that wields a powerful boss-type monster is a treat. And, this being Dragon Warrior, it also means you have a level 1 monster that you need to grind into an awesome emissary of winged death. Thankfully, there are enough travelers gates that youll have unexplored places to grind until very late in the game.

The bestiary here is a massive 215 monsters strong, spanning the history of the Dragon Quest series to this point. The sprite art for this pantheon is perhaps the pinnacle achievement of the Gameboys hardware. Each monster has its own unique animated sprite in the field and enlarged portrait in the menu. If youre a fan of the Dragon Quest series, youll inevitably find yourself scrolling through the in-game library marveling at all of them. 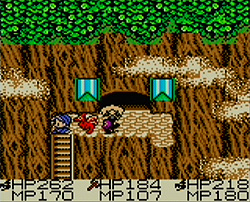 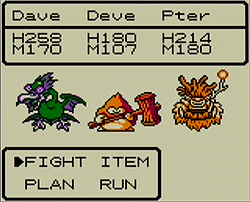 The sprite work is some of the best on the Gameboy.

The music too is also a love letter. The last floor of each travelers gate reprises a musical theme from the game where that travelers gates boss first appeared. Everything about Dragon Warrior Monsters oozes the slimy charm of the series--its the RPG equivalent of Super Smash Bros.

Its hard to see the massive homage that Dragon Warrior Monsters is to the series history for players that simply missed out on that history. Creating your own DeathMore and Mirudraas will mean nothing to players who never heard of them. A huge swatch of its 215 monsters are from games that did not have an official English localization. North American players can also be forgiven for not knowing that the last two games in the main Dragon Question series had a monster recruiting that predated Pokemon Red and Green by a few years, nor that Dragon Warrior IV (the least successful of the games that were localized) featured very similar AI-driven combat.

Things are different now. We have official or unofficial translations for all the Dragon Quest games that did not leave Japan during the drought of the 1990s and the series is now known by its rightful name. Yet today, Dragon Warrior Monsters (and its phenomenal sequel) still cant shake the superficial comparisons to Pokemon, even though the only thing the two games have in common is that you get to play with monsters. Dragon Warrior Monsters isnt a clone of anything; its an evolution of what the series was already doing, a celebration of one of the most long-lived RPGs, and a love letter to anyone whos played it.

If you enjoyed this Dragon Warrior Monsters review, you're encouraged to discuss it with the author and with other members of the site's community. If you don't already have an HonestGamers account, you can sign up for one in a snap. Thank you for reading!

© 1998-2021 HonestGamers
None of the material contained within this site may be reproduced in any conceivable fashion without permission from the author(s) of said material. This site is not sponsored or endorsed by Nintendo, Sega, Sony, Microsoft, or any other such party. Dragon Warrior Monsters is a registered trademark of its copyright holder. This site makes no claim to Dragon Warrior Monsters, its characters, screenshots, artwork, music, or any intellectual property contained within. Opinions expressed on this site do not necessarily represent the opinion of site staff or sponsors. Staff and freelance reviews are typically written based on time spent with a retail review copy or review key for the game that is provided by its publisher.