Utawarerumono: Prelude to the Fallen is the recent rerelease of the 2006 PS2 Japan-exclusive game Utawarerumono: Chiriyukusha e no Komoriuta, which, itself, was a rerelease of the 2002 Japan-exclusive PC eroge Utawarerumono. The game has had both significant and minor alterations made to it during its near 20-year (official) Western release, the most obvious being the removal of the eroge scenes available in the original and the massive improvements made to the turn based combat. These scenes being removed does make sense, considering they were always going to fail the Sony check when making the move to console, but it would be unfair to suggest their exclusion is completely painless. Never a hard eroge at heart, Utawarerumono used these parts sparingly, usually to highlight each characters vulnerability before then being haremd by the protagonist. This all now happens off screen before the game moves on, hoping you didnt notice the small hole where the content used to be.

If this bothers you, you can do what many of us did back in the day; lean on the excellent fan translation of the original and play it as 2002 intended. But youd be missing out on a lot. Though the Utawarerumono series is basically a visual novel with turn based combat included, the scope and the competence of said combat has been massively upscaled. Advancements like offering equipment you can win from conquered battles, or discover by destroying hidden objects placed in inconvenient locations around skirmish maps. Depending on their relationship, adjacent allies now have access to blistering co-op attacks that can decimate large swaths of the enemy force if used correctly. Theres extra chapters focusing on the characters most neglected by the original and Easter eggs hidden away for those willing to put in the time to search them out. All the games battles are repeatable should you want to delve back into mêlées already beaten to grind levels, or hunt down evasive items you couldnt claim on the first sweep. Theres exclusive training missions you can trigger any time you like after a certain point of the game. I used them to try and break up the mountains and mountains and mountains of words.

Theres a bazillion words no matter which version you partake in (though the original doesnt have the stellar Japanese voice acting the other titles do), so without a decent story, all the improved combat would be particularly meaningless. Utawarerumono, then, is the tale of an amnesiac man, who is rescued by a rural village and nursed back to health. Not the most auspicious start, but the tale gains strength in how hard it invests in the cast. Given the name Hakuowlo until the time hes able to remember his own, he spends his initial days carefully recuperating and learning about the world around him. It all seems a little out of place to him; for example, everyone else seems to have little fluffy tails and floppy ears he seems bereft of. It doesnt seem normal, but what does he know? Hes an amnesia trope, after all. Maybe hes the weird one.

Utawarerumono never, ever hurries. Instead, it patiently builds. Hakuowlos saviour turns out to be a timid young healer-in-training named Eruru, who is his main source of companionship while bed-bound, nagging him gently every time he overexerts himself. Slowly, he regains some strength and integrates himself with the village. He discovers how to get past Erurus younger sisters severe stranger anxiety and carefully establishes perhaps his strongest bond throughout his tale. He helps cultivate the villages farmland with knowledge he didnt know he had, and is able to bypass problems with a sense of wisdom that even he is surprised by. He grows by helping the people around him and, as he grows, they grow. It could have been a simple, idyllic existence. But that was never meant to be.

Slight things escalate. Diminutive enough that they barely register as an issue until theyve become near insurmountable. The games first inkling of antagonists flirt at being stereotypes; the greedy lord whos found his position in life due to nepotism rather than any particular skillset. His obnoxious son, who thinks his station in life gives him credence to do or take anything he pleases. Except, theyre rarely so two dimensional. The son, Nuwangi, used to live in the village, but his ascension into the noble ranks has rotted away his humble groundings. He wants to catch the eye of the girl he likes, but his mimicry of the corrupt ruling class sees his meaningless power trips take him further and further away from the person he used to be, and estranges him little by little from the affection he seeks. Confused, infuriated and heartbroken, he lashes out. Theres consequences. He cant deal with them, and he makes things worse. People are forced to take action. Hakuowlo is forced to lead. 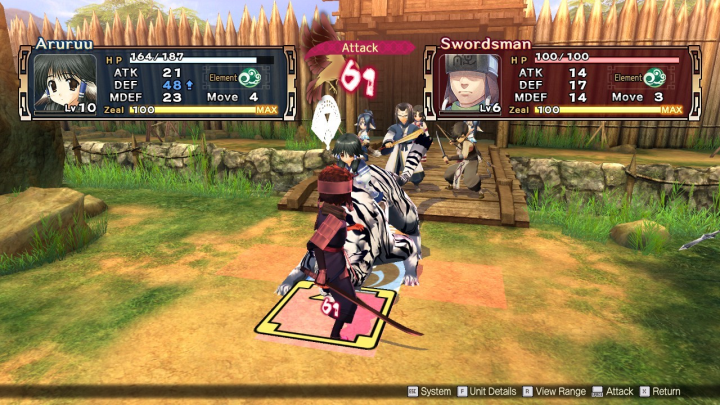 But each victory he takes only opens the door to further obstacles hes obligated to deal with, and furthers the pool of people under his care. Oboro doesnt care for Hakuowlo much when they first meet; hes the leader of a hidden sect of bandits pillaging the nobles. While his crimes initially make him appear an unappealing ally, his uncaring façade will crack in time, revealing a desperate brother motivated completely for the survival of his ailing sister. He struggles under this burden, hiding his anxiety beneath the bluster of an overly-proud combatant, but once this burden is shared, hes able to become more than what he was. People flock to Hakuowlos side in a bid to help him protect the small, precious thing hes trying to build, but theyre not just dismissed as rank and file. Utawarerumono takes the time to build them as people, showing everyone not only at their best and at their worst, but all the little bits in between. Whos more likely to sneak food out of storage between meals, and whos more likely to stay up to the early hours of the morning trying to catch them? Who works ceaselessly to appear a tranquil ocean of calm and grace, but devolves into a gibbering psychopath if any of their childhood heirlooms are threatened? Who spends the majority of their time as the most loyal and dependable companion until the very second the prospect of mind-numbing paperwork is breached, wherein even the lowest betrayal suddenly becomes fair game?

Together, they try to build a slightly better place from the ashes of the broken world theyre forced to burn down. Its not easy, its never easy, but they suffer together and they survive together. Even as their ranks swell, no ones ever truly forgotten, and they press forward as best they can. They succeed, and that success invites fresh disaster. They pick each other up and they press forward. Jealously, ambition and greed strike at them from the shadows, and so they all take the hit, and then they all strike back. Hakuowlos at the head, but somewhere, subtly, the game stops being just about him; every choice he makes affects something or someone. There are hard choices to be sown. There are consequences to be reaped.

If you enjoyed this Utawarerumono: Prelude to the Fallen review, you're encouraged to discuss it with the author and with other members of the site's community. If you don't already have an HonestGamers account, you can sign up for one in a snap. Thank you for reading!

© 1998 - 2022 HonestGamers
None of the material contained within this site may be reproduced in any conceivable fashion without permission from the author(s) of said material. This site is not sponsored or endorsed by Nintendo, Sega, Sony, Microsoft, or any other such party. Utawarerumono: Prelude to the Fallen is a registered trademark of its copyright holder. This site makes no claim to Utawarerumono: Prelude to the Fallen, its characters, screenshots, artwork, music, or any intellectual property contained within. Opinions expressed on this site do not necessarily represent the opinion of site staff or sponsors. Staff and freelance reviews are typically written based on time spent with a retail review copy or review key for the game that is provided by its publisher.