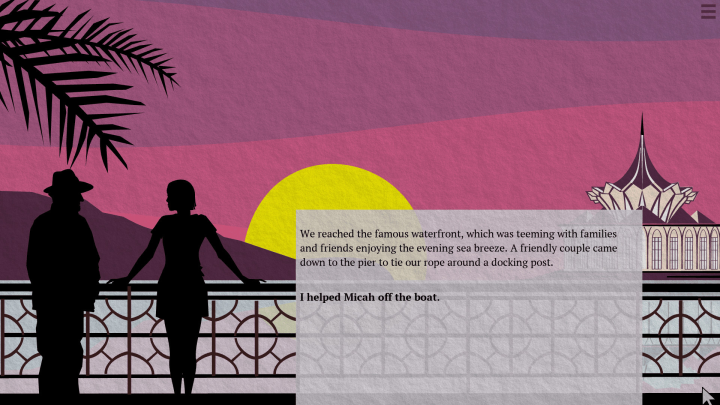 No ones going to confuse Sarawak as a rolling epic; instead, its a self-contained little tale that you should see to completion in about 90 minutes or so. It describes itself as a literary mystery game, which is fitting enough that Im going to steal it and use it like my own. Its the tale of Mia, who finds herself mixed up in the murder of an Oxford professor. Her initial investigation is begrudging, but each new discovery makes the ordeal more personal, until shes finally forced to go all in.

Theres a fair bit of story crammed into less than two hours of running time, so its to Sarawaks credit that it never feels especially rushed. A text-based adventure at heart, progression is mainly highlighted by scrolling down the page, as if you were reading an interactive word document. This is used to the games advantage in several inventive ways. Sometimes you need to scroll back up because something has changed in a previous image after a bit of amateur sleuthing. Sometimes, scrolling down brings up new images in unexpected ways.

For the most part, youre scroll-locked at various points until youre able to nudge the story along. This usually either involves solving a simplistic puzzle or by abusing various conversational prompts. The puzzles are unobtrusive and embrace the simplistic nature of the game, giving you the option to skip some of the more challenging ones and scoring huge merits in my book for not containing a single sliding tile puzzle. Several important conversations can branch out, offering you several replies you can select to advance the topic in a way of your choosing. Mia can often be straight up with people, or play it coy, trying to work better angles. Or try to work from a false sense of naivety.

It keeps her busy, taking tours through the oldest parts of Oxford academia, or jetting off to Borneo to visit the titular location itself. Her journey is divided into small chapters, making it easy to go back and see how a conversation would have gone had she adopted a different tact, or if a puzzle can be bypassed a different way. And then, its over. In contrast to the main body of the game, the ending is the first time Sarawak feels like it has rushed a slice of the narrative, but the tale is neatly concluded nonetheless. Its not going to keep you enthralled for several evenings on end, and theres not a lot of reason to revisit it once youre done, but it contains enough solid writing and creative puzzles to keep you invested throughout. Strong conclusions are overrated, anyway.

If you enjoyed this Sarawak review, you're encouraged to discuss it with the author and with other members of the site's community. If you don't already have an HonestGamers account, you can sign up for one in a snap. Thank you for reading!

© 1998 - 2022 HonestGamers
None of the material contained within this site may be reproduced in any conceivable fashion without permission from the author(s) of said material. This site is not sponsored or endorsed by Nintendo, Sega, Sony, Microsoft, or any other such party. Sarawak is a registered trademark of its copyright holder. This site makes no claim to Sarawak, its characters, screenshots, artwork, music, or any intellectual property contained within. Opinions expressed on this site do not necessarily represent the opinion of site staff or sponsors. Staff and freelance reviews are typically written based on time spent with a retail review copy or review key for the game that is provided by its publisher.