There are few games that have come out in the past decade I could describe as being magical. Its not something I attribute because its a successful Kickstarter project with undeserved praise, rather that this game takes the design philosophies of two decades ago, polishes its gameplay and storyline, and makes a game that is greater than the sum of its predecessors. The result is a game that not only shows the devotion of fans who wanted the genre to return but also a vast richness in world design that few games can ever dream of.

This level of polish is something I think cynical reviewers may overlook because of the many derivative elements you will find from Black Isle Studios (and BioWare): Baldurs Gate, Icewind Dale and Planescape Torment. While originality is important--and by no means is PoE lacking its own ideas--the thing that is always more important is the execution of an idea, and PoE is living proof that an imitation can be a sincere form of flattery but also become the next crowning pillar of excellence.

As previously mentioned, PoE goes to great lengths to masquerade all its complexities from its past. The most obvious comparison is the style of gameplay as you can play with a six-party team of adventurers in an isometric world. Various monsters are also obviously rebranded from D&D like the Xaurip (Kobolds), Vithrack (Mind-Flayers) and, my favorite, Vampyres. Even the mechanics of classes and leveling up takes a lot of inspiration from D&Ds ruleset with player expression in their choices (mainly for combat). 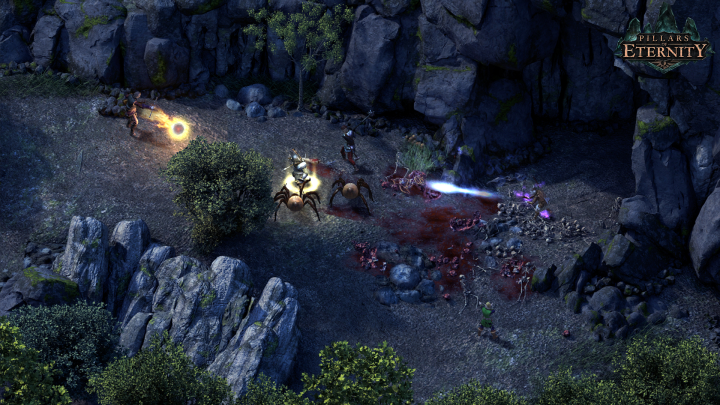 Perhaps the subtlest of all deviations is how Obsidian has reworked the implementation of THAC0. If you have played these games, then the concept is familiar enough; however, if you have not played them like when I first started, the idea is that it represents the players ineptness at the start and becomes the players greatest show of growth overtime. In BG, this number factored in various other statistics that alienated most players from ever finishing the game; in PoE, they rebranded it into something simpler to understand and more complex to affect, Accuracy.

Accuracy is the sole component that determines the difficulty of this game. It not only determines the chance/skill to hit and the damage output, but it also acts as the players ineptness as this number adds up over every level to help drive the players growth. If you balance this number along with Damage Reduction and Recovery Speed from armor, then you have understood the most important details of this game.

This system is much easier for newcomers, myself included, to understand how to become better at the game as almost all skills, passives, class-unlocks, etc. are related back to Accuracy. There are various unlocks, spells, potions, food, etc. to achieve the best result that it helps not only make each character feel distinct but also helps the player roleplay. Even when it comes to the games unique usage of difficulty where it modifies the number/quality of your encounters, except for Path of the Damned which modifies them only slightly, mastering the game is a far easier and rewarding challenge. 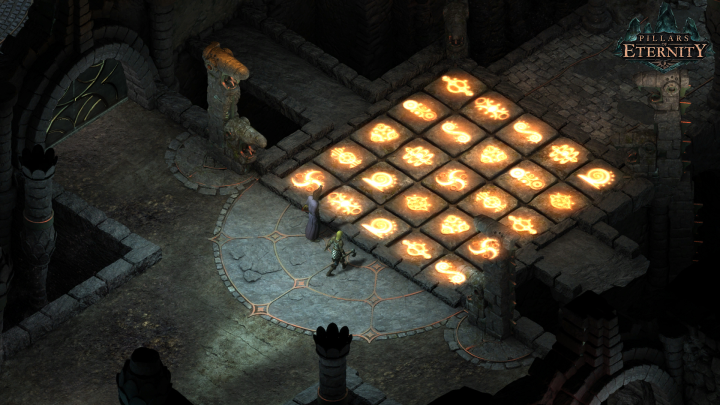 Speaking of roleplaying, the amount of dialogue options taken from PT--mainly five to six various tones but always a yes, no or kill option--the quest-opportunities, the reputation system, and the way companions work for this game lends immense replayability value. Backgrounds--species, history, classes, and even character sheets--also add in little moments that will make each playthrough distinct in small, though over time grand, effects.

In brief, RPGs by their very nature make numbers behold beauty in their simplicity, and this games implementation of statistics and of player expression is as beautiful as Einsteins theories of relativity. This facet alone would make this game nearly flawless; however, the storytelling and world are also the richest parts from this game to explore.

Before I delve into discussing the narrative, there are two things I want to say. One, I will avoid spoilers by discussing its themes as well as how the structure works (for companions and the story), so nothing I say will diminish experiencing it for yourself. Second, I chose that word for a reason as it is something this game and Tyranny excel in handling: Agnosticism. 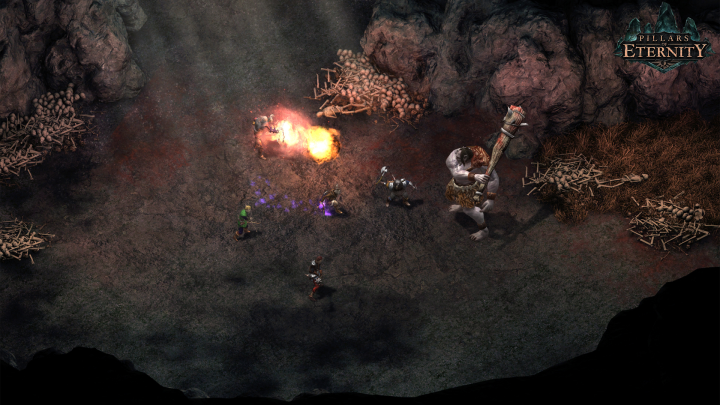 Agnosticism has nothing to do with beliefs but how one knows the world. This theme is integral to the storyline of PoE by how it handles exposing you to the viewpoints of gods through writings from people and even the viewpoints of other gods from both sides. For most of the game, as well as DLC, you are indirectly learning much from the world by comparing both sides of their stories and parsing out the truth from the misconceptions. Twenty hours into the game and I was already comparing the teachings of Abydon to the ways of Wael as well as their end-goals, and the story is richer as a result. Even if you do not care about reading the texts of lore, the exposure from the quests and various factions/places in the world will make you stop and question what is accepted as truth.

If you have played Morrowind, then you will be familiar with this style of a plot-structure. The result is that most of the quests are indistinguishable from the main-plot as its all tightly woven together, and unlike modern BioWare, there are no major plot-points to emphasize urgency. This is seen in how companion quests are often simple questlines with tangential stories that delve into the lore. As a matter of replayability, this structure is superior because it doesnt force the player to do something specific, though people may find that many end too soon or have a vague/lacking ending. And when you reach that final decision in the game, the consequences and ramifications of your actions show up a la Fallout: New Vegas.

If games want to emphasize linear storytelling, PoE is how they should be handled, emphasizing lore with the plot through replayability, and this game is by far the best in that category. Not everyone may enjoy its structure, and, admittedly, the antagonist has the grandeur of Irenicus but suffers a small presence like Sarevok from BG, so the story itself isnt flawless. Its the usage of a game to tell that story which embodies its grandness.

None of this is to say that the game doesnt have its faults. 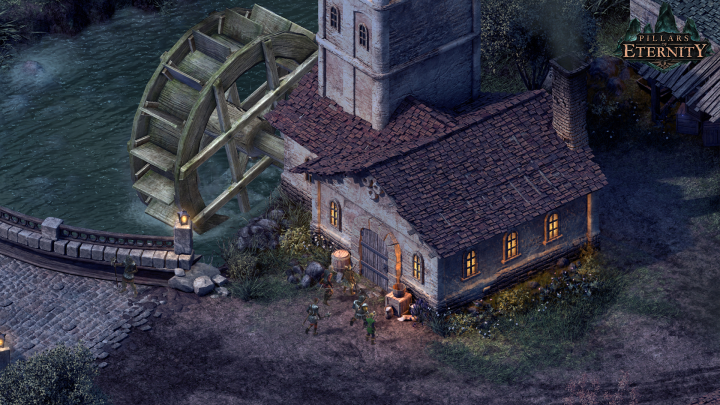 The gameplay requires a lot of micromanaging of party-members on Path of the Damned as well as being intimidating at first. Some encounters are obviously meant for higher-levels that you will only know after trying them. If you prefer more non-combat options for RPGs, then this game may disappoint you in forced encounters--you typically can avoid the more difficult side quests or make them easier to handle. Also, the main game itself is a 40 to 75 hour storyline that may dissuade some people, though the mechanical complexity and leveling-up system keep you retained. Lastly, the stronghold system is half-baked with a surplus of gold always being at your disposal and some enemies/effects are rather ridiculous like paralysis from Shades.

For every one of these issues, however, there are always a work-around, and after 70 hours of Path of the Damned--including the high-level alterations--I was never forced to use consumables for buffs if I managed my party efficiently. This level of challenge is something few games can handle correctly without ruining the fun as it makes all the surplus consumables to help you on repeated playthroughs to overcome a challenge you once found insurmountable.

The only criticism I think is undeniable is if you dont like reading you wont like this game. And if you read this much of a review and found the game interesting from what Ive shared thus far, I think youll love it in spite of all the stupid Engwithian names you will learn.
5/5

If you enjoyed this Pillars of Eternity review, you're encouraged to discuss it with the author and with other members of the site's community. If you don't already have an HonestGamers account, you can sign up for one in a snap. Thank you for reading!

© 1998-2021 HonestGamers
None of the material contained within this site may be reproduced in any conceivable fashion without permission from the author(s) of said material. This site is not sponsored or endorsed by Nintendo, Sega, Sony, Microsoft, or any other such party. Pillars of Eternity is a registered trademark of its copyright holder. This site makes no claim to Pillars of Eternity, its characters, screenshots, artwork, music, or any intellectual property contained within. Opinions expressed on this site do not necessarily represent the opinion of site staff or sponsors. Staff and freelance reviews are typically written based on time spent with a retail review copy or review key for the game that is provided by its publisher.