A hardcore rally simulator Dirt 5 is not. Thats probably going to disappoint some people, but it really shouldnt be all that big of a surprise. For a while now, Codemasters have been leaning the core Dirt series away from pure simulation, saving those ventures for the Dirt Rally offshoot. Where they might find more justifiable annoyance is just how hard the newest entry has embraced casual arcade racing.

An argument could be made that, in an attempt to appeal to everyone, Dirt 5 risks making a game that treats everyone like genre beginners, alienating the core audience. Which is a weird shade for a series of racing simulators that have been kicking around since 2007. Its not focused on technical intricacies, like providing different kinds of subtle feedback on the seventeen different choices of suspension brackets, but concentrates more on bombastic spectacle. For example, the game ignores the norm of hyper-realism in favour of a more colourful near-cartoon aesthetic. Its not going to be to everyones taste, but it certainly makes the most of its design choice. By doing so, it doesnt limit your races to the nondescript muddy backroads of rally lore, but dumps you instead in the untamed wilderness of the Brazilian rainforest. Sometimes, even mud seems too pedestrian, so it tasks you to traverse frozen Norwegian fjords or the shifting sands of the Moroccan desert. With diverse courses paired with a dynamic weather system, Dirt isnt thrifty when it comes to environmental challenges, forcing you to adapt your racing style on the fly.

It works so hard not to be mistaken as a studious simulation, but sometimes strays into overkill. Theres an overlaying podcast that serves as narration throughout the career mode that rarely peaks beyond slightly annoying. At best, it's a superfluous filler that you sit through in order to get to the racing, but warrants some appreciation for trying to provide another layer of depth. In career, you race for tokens that mainly serve to gatekeep entry to the next stage. Through this mode, youll be forced to travel the entire gamut of race types and vehicles that Dirt has to offer. Serial winners will start unlocking these cars (as well as obligatory decal options) to take on to the track of their choosing in the Arcade mode. 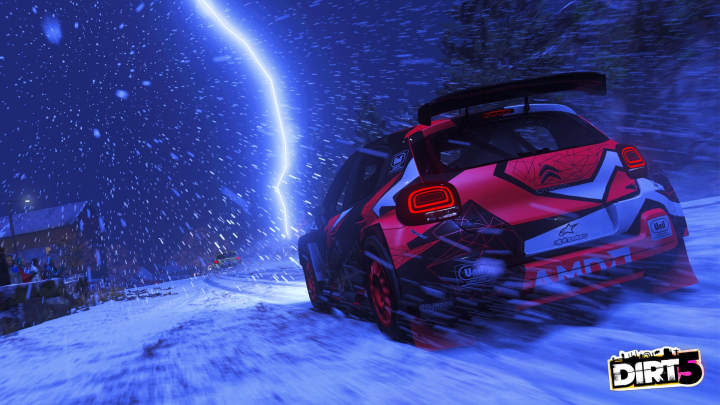 Theres a laudable amount of creative races available, but theres also the Playground mode, where you can design your own tracks, or just download the efforts of more creative and/or patient people instead. Theres a preposterous amount of content to explore here, from the harrowingly challenging to the ridiculously outlandish. Id feel more inclined to build my own, but all my Playground time is taken up with the Gymkhana mode, which tries very hard to convince you that all manner of rally cars are perfectly adaptable to Tony Hawk Pro Skater-esque shenanigans.

Dirt 5s efforts to distance itself from super serious driving is going to alienate some couch-bound racers, but is perfectly capable of surprising you into having a good time. It doesnt feel dissimilar to the SEGA monopoly of arcade racers back in the day, offering goofy hi-octane adrenaline shots above mechanical proficiency. In embracing this, it serves as an interesting foil to deeper games, like the infinitely more technical Forza Horizon 4. Sometimes, it felt like the presentation was overtly flashy enough to cringe at, and, often, it felt like the simplification of the racing was at odds with any sense of challenge it tried to construct. Theres little to invest in if youre searching for a deep grind racing experience; to replay tracks over and over, searching for the perfect competitive line or premium vehicle set up. Dirt 5 is more about moment to moment racing; about chasing the spectacle
3.5/5

If you enjoyed this DiRT 5 review, you're encouraged to discuss it with the author and with other members of the site's community. If you don't already have an HonestGamers account, you can sign up for one in a snap. Thank you for reading!

© 1998-2021 HonestGamers
None of the material contained within this site may be reproduced in any conceivable fashion without permission from the author(s) of said material. This site is not sponsored or endorsed by Nintendo, Sega, Sony, Microsoft, or any other such party. DiRT 5 is a registered trademark of its copyright holder. This site makes no claim to DiRT 5, its characters, screenshots, artwork, music, or any intellectual property contained within. Opinions expressed on this site do not necessarily represent the opinion of site staff or sponsors. Staff and freelance reviews are typically written based on time spent with a retail review copy or review key for the game that is provided by its publisher.