Stretch Arcade is so basic and straightforward that it's going to be off-putting to some. You just blow up a series of glowing, circular objects before they gravitate and destroy a core. You do this for 20 levels. That's the entire product for the cost of 99 cents. The game even intentionally takes on a quasi-retro appearance with a minimalist pixelated style in order to look simple. But despite the uncomplicated premise, it slowly gives way to a surprisingly challenging, often frantic experience when you climb through the levels. You've heard the term "easy to learn and difficult to master," and this title takes that quote to heart.

The challenge is structured around the method used in destroying circular objects: button presses. Specifically, each object has a button prompt labeled on them, whether it be the four face buttons or the D-pad arrows; press said prompt and destroy the object. You do this until all opposition is eradicated from each level. This sounds simple enough at first, since these orb-like entities slowly float out from a few holes on one side of the screen, basically acting as target practice. However, when you arrive at level three, they start popping out of holes from the left and right sides of the screen. 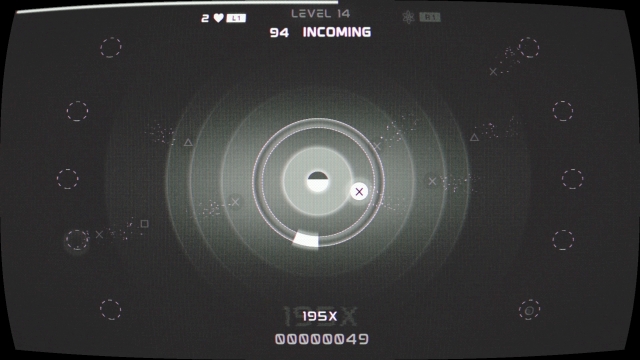 From this point forward, you're basically attacking orbs coming from two separate sides, from ten different holes, each at different intervals. Not to mention their movement speed and the rate at which they appear increases in subsequent levels. That's not all. While destroying orbs with correct button presses in an ever-escalating environment is one thing, you also have to destroy them in order starting from closest proximity to the core. Again, this sounds easier in wording, but much more chaotic in execution. You're continually in a scenario where certain orbs are barely centimeters from one another, from different sides. You can likely handle this at first, since the kill tally for early levels are in the single and double digits, but you will feel the pressure when they hit the triple digits.

Stretch Arcade essentially forces you to correctly press buttons, dozens and hundreds of times, in a speedy manner. Not only do you need to be on point with your thumbs, but your eyes are also madly moving around the screen, deducing which object is closest to the core among a constantly-growing crowd. Thankfully, the game doesn't leave all the guess work to you, as minor cues help out. The most obvious cue is the one that highlights the current orb in need of pressing, but going an extra practical step is how, after the orb is destroyed, the highlighter then travels to the next orb. You probably won't even notice these subtle two when playing for the first time due to how trivial they seem. However, the cues become very vital in later levels, when you're tasked with pressing buttons anywhere from 200 to 450 times. In a single level.

By level ten, you're given another helpful ability: a nuke that eliminates everything currently on screen. Obtaining this weapon requires that orbs cross a ring threshold near the core, which allows for a meter to fill until you have enough for an unleashing. And like so many other aspects, actually getting the nuke is trickier than it sounds. The catch here is that, once the orbs cross the threshold, you must destroy them before they hurt the core, as a single touch will reset the meter. In turn, this adds another hectic element to the gameplay, as a nuke can be your saving grace, but it's also an inch away from being your major downfall. Though, depending on how fast you are at reacting, a dramatic recovery isn't out of the question.

All of this stems from a simple outline in a game that, when everything is ultimately said, is still a basic, straightforward experience. That's not a putdown. As a title whose emphasis is based around reflex coordination, it does the job admirably, and with so few resources to work with. Of course, play length will vary depending on the type of gamer you are; players good at twitch-style games will get through it much faster, likely within an hour or so, while others not well-versed in this type might take hours or days. It might not be the next best thing in your life, but Stretch Arcade is a very honest showcase of hand-eye tactics that will certainly give you value for what it's worth.
3.5/5

If you enjoyed this Stretch Arcade review, you're encouraged to discuss it with the author and with other members of the site's community. If you don't already have an HonestGamers account, you can sign up for one in a snap. Thank you for reading!

© 1998-2021 HonestGamers
None of the material contained within this site may be reproduced in any conceivable fashion without permission from the author(s) of said material. This site is not sponsored or endorsed by Nintendo, Sega, Sony, Microsoft, or any other such party. Stretch Arcade is a registered trademark of its copyright holder. This site makes no claim to Stretch Arcade, its characters, screenshots, artwork, music, or any intellectual property contained within. Opinions expressed on this site do not necessarily represent the opinion of site staff or sponsors. Staff and freelance reviews are typically written based on time spent with a retail review copy or review key for the game that is provided by its publisher.