You can't help but think this is a joke. It's called Grass Cutter: Mutated Lawns... and the goal is to literally cut grass with a lawn mower. Also, depending on your personal preferences, there are other "red flags" that can lead to this conclusion. Graphically, the game uses a simple approach with the help of the Unity engine; characters and environments are created with a voxel-based art style, similar to something like Minecraft's blocky presentation. Then there's the fact that the product is free to play. That may sound like an odd negative, but some associate a free game as one with very little effort put into it for various reasons.

But say you actually take the dive, playing the game to see if it has any real substance. Within the first few minutes, maybe even seconds, you're likely fighting the urge to quit: the first level simply has you cutting grass in someone's backyard. It's like playing Snake where the mower moves nonstop, except now you don't have to worry about dying when going over previously cut spots. The level lasts... less than ten seconds, unless you really suck at video games. Successive levels have you cutting more grass on slightly larger lawns, now with obstacles such as rocks and puddles. Both will take away a chunk of your health when you move over them, but they're not really serious threats considering their lax placements in the environments. By the time you reach the seventh level, the biggest advancement this game makes is one where... you're pushing crates over water to create new paths. 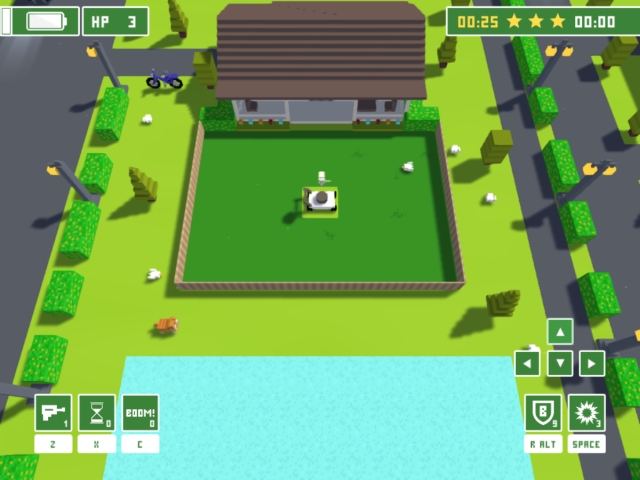 Granted, games take a bit to warm up because they're teaching players mechanics within a design before giving them something challenging. However, forcing players to go through a lengthy streak of apprehensive growth before laying it on them is a bit silly, especially in Grass Cutter's case. Why so? Because at some point, it starts feeling like an actual video game with genuine hazards. At level 13, you're actually forced to think about a solution involving two crates and two streams to reach the last grass field. Somewhat clogging these fields are security bots and anthropomorphic grass creatures on predetermined routes, the former exploding when getting too close. You have to dodge them while contending with the automatic movements of your mower, which, if not careful, can cause you to accidentally hit enemies or push a crate in a corner, the latter forcing a restart.

However, the 15th level specifically acts like a threshold, one where you cut grass in a large arena while avoiding ground spikes caused by a bigger, slower grass monster. Once you pass this, Grass Cutter hits you; it hits you hard. Levels outright transform into obstacle courses, making grass cutting much stricter due to the now narrow, "corridor-like" paths that enemies often traverse. There's also other serious dangers, such as countering projectile fire from multiple directions, interval wind hazards that push you into other objects, timed button presses, laser barriers, and much more. The aforementioned rocks and water hazards no longer feel like jokes in these conditions, but real threats to your safety. In contrast, the first 15 levels combined can be finished in less than 30 minutes, while these following levels can take 20 to 30 minutes each with retries.

The layouts get to a point where each portion of a level feels like its own minigame. Take level 24, for example. Beginning on the left side of the lawn, you must avoid a really fast grass creature that leaves a temporary trail of spikes as it runs off. You have to cut the grass in these spots, so timing is key. Furthermore, you also must carefully push a crate over a button to gain access to the right side of the lawn. The right, which is the same length as the left, actually houses three separate portions to complete, each with extremely cramped areas guarded by mud spots and stripes that can end your run if you fall in... once. You'll have to cross through one area before a laser barrier reactivates, another section forces you to avoid a turret that strafes at intervals, and the remaining spot has you fighting wind strength coming from five fans... in a mud grid. 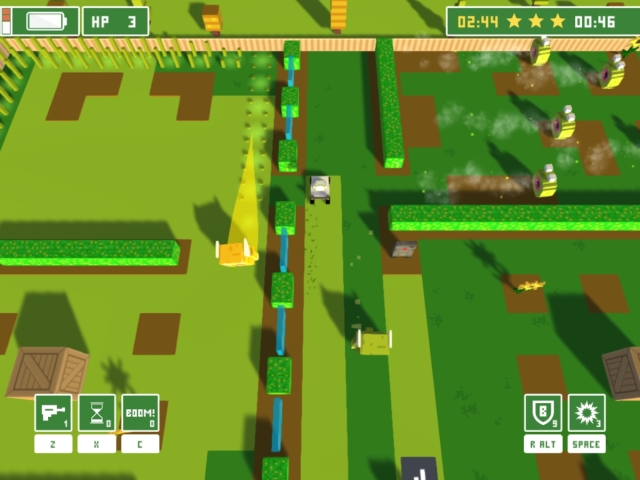 Now, if you think it's possible to ignore a good chunk of these hazards, you'd be wrong. Due to Grass Cutter's main objective of cutting every portion of grass on a field, you have to face every hazard this game throws at you. It's very tense, due to the combination of surprisingly tight level design, clever enemy placement, and the fear of losing it all with one simple turn into water, mud, or an enemy. You also have to take into consideration aspects that were nonthreatening in the beginning, like a constantly-draining health meter; if it gets too low, you'll have to stop your task and travel all around the field to find a health refill dropped at random. You have lives, but if you let the meter drain completely, it's just as bad as losing all of them. The game never lets up on the pressure.

It's quite the turnaround from the weirdly-jokey, generic start, as Grass Cutter's challenging, often-devlish level designs are more calculated than similarly-designed games that you actually have to buy. With monies. And this would be such a hearty recommendation if it wasn't for one irritating issue: turning the mower. Basically, every spot of a level is made up of a square tile. Your mower and every enemy can only move left, right, up, and down; no diagonal movement. This creates a problem where, if you're not completely off the prior tile as you're turning, the game will process it as if you're turning on the previous tile. The game will then "rollback" the mower to that tile, where the mower is now in mid-turn. 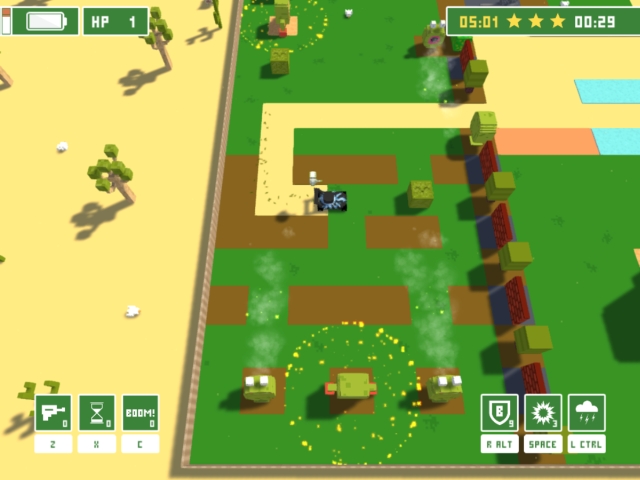 This can ruin a great run. You could be doing an incredible job, cutting grass with precision, dodging projectiles, dashing around grass mutant stompers, not losing a single life, and about to finish in time for the coveted three star rating. Then, because you were a millisecond off when turning, you accidentally fall into mud, which is an instant game over. What's frustrating is that it feels random, even if it's not; this irregular feeling is present because you're dealing with a mower with automatic "Snake" movement. It's difficult to predict the mower's exact position when it's constantly in a state of motion, consistently surrounded by frantic opposition. It's hard to think of an actual solution to this flaw, too, since a proper fix could require restructuring a lot of the mechanics and such. Perhaps have an option to highlight a tile the mower is currently on?

Unfortunately, this drops Grass Cutter from a true recommendation to a cautious one. The flaw doesn't destroy the game, but it will slow your progress. Though, it is very telling about the overall solid level design that, even when you run into this issue, you're still tempted to keep going. You likely might even beat the game's 42 levels and some of its bonus rounds. Give it a go if you currently don't have anything planned; you might be surprised by what this "joke" has to offer.
3.5/5

If you enjoyed this Grass Cutter: Mutated Lawns review, you're encouraged to discuss it with the author and with other members of the site's community. If you don't already have an HonestGamers account, you can sign up for one in a snap. Thank you for reading!

© 1998-2021 HonestGamers
None of the material contained within this site may be reproduced in any conceivable fashion without permission from the author(s) of said material. This site is not sponsored or endorsed by Nintendo, Sega, Sony, Microsoft, or any other such party. Grass Cutter: Mutated Lawns is a registered trademark of its copyright holder. This site makes no claim to Grass Cutter: Mutated Lawns, its characters, screenshots, artwork, music, or any intellectual property contained within. Opinions expressed on this site do not necessarily represent the opinion of site staff or sponsors. Staff and freelance reviews are typically written based on time spent with a retail review copy or review key for the game that is provided by its publisher.