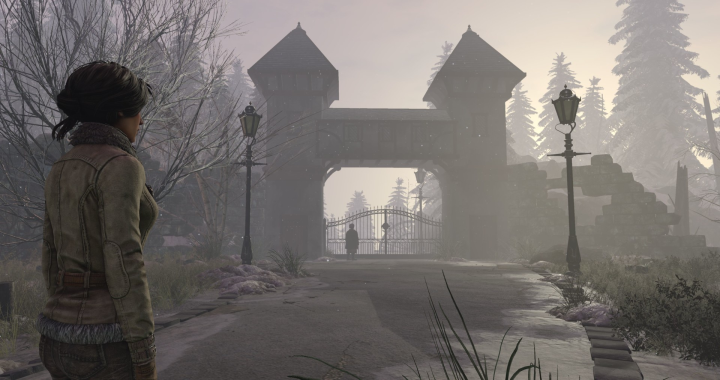 Before it was anything else, the original Syberia was a character study. Kate Walker, ambitious American lawyer, forced to slum down in some backwater country to try and resolve a contract dispute. Still pestered endlessly by her demanding boss and needled by her overbearing mother, being half the world away was no relapse from the demands of her society. Syberia introduced her at her worst, refusing to be drawn in by the quaint little town she considered beneath her, dismissive of the curious folk who lived there. Over the course of the tale, she finds herself changed; the things that she once couldnt bear to be without steadily dismissed as vain nonsense. Syberia 2 was about finishing the adventure she had started. Her personal journey had been completed, but the people who had helped pry her loose from her old self still had things to conclude, and time was running out. It wasnt as meaningful or gripping an exploit as the first, but it still felt important. Kate, the new Kate, had grown attached to the people, to the world, and it was important to her that she sees things through to completion.

The first two games felt like a natural continuation of the same touching tale, significantly helped by a scant two year gap between the releases. They bled into each other, returning characters being less fanservice-motivated cameos and instead being driving forces across both adventures. With Kates personal story wrapped up in the first game, and the overbranching plot concluded in the second, Syberia felt like a completed project and, aside from the occasional (and oft disastrous) flirtation with mobile gaming ports, that nothing more was heard from the series wasnt of particular surprise. It wasnt to be burdened with supercilious extensions to a completed story, cynically preying on nostalgia. It was above that.

Until 2017 came and Syberia 3 burst forth from production hell.

Syberia 3 is not a good game. Not just as in a comparison to the existing titles, but, standalone, it just isnt very good. Its a mechanical disaster, featuring awful, clumsy controls that, despite promising the evolution of the genre, manage to be massively regressive. It takes the series' first clumsy steps into 3D point and click territory, more in the vein of Dreamfall than traditional adventure games like The Longest Journey, which means you have direct control of the character, rather than guide nothing more than the mouse cursor about the screen. In and of itself, this isnt a bad evolution, and has often worked well when called on. But not here, where its an exercise in pure tedium. Wrought with multiplatform console releases in mind, Syberia 3s PC port didnt even have mouse control at one time, leaving you with the fickle machinations of the gamepads input. It would allow you to move around the screen without issue, but makes interacting with hotspots a thing of whispered legend. 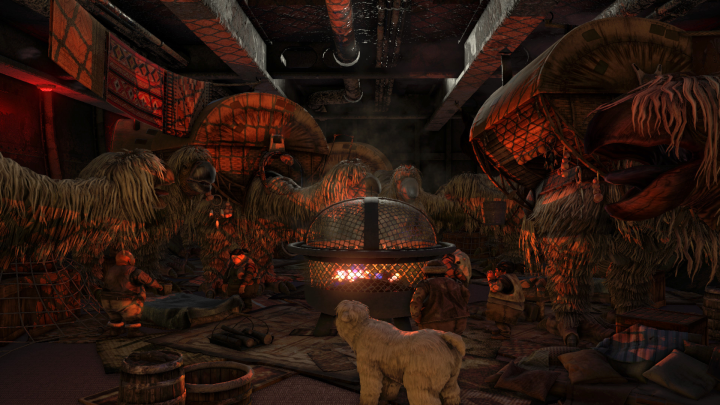 If you know something is there to be used, you can often find yourself approaching it with no interaction opportunity triggering, so you resort to backing up and creeping forward over and over in an attempt to register the item. Or rubbing yourself up against it violently once your patience gives out. Or moving towards it at weird angles, mashing the action button in desperation. If, instead, youre exploring and looking for new hotspots, then theres every chance youll just stroll past important interactions and never know they even exist. This doesnt happen with every contact; it doesnt even happen with most. But it happens often enough. Eventually, mouse support was mapped in, and so my playthrough of Syberia 3 became this comical juggling act of exploring with a gamepad and puzzle solving with the mouse, switching between the two interfaces continuously. It wasnt comfortable; it was barely serviceable, but I could make awkward, jarring progress. Which was a shame.

At this point, trying to decide what to complain about next riddles me with choice paralysis. Where to really start? More or less every voiced line has this weird affliction to it, like theyre being read by robots who have recently processed a Wikipedia article on emotion, but havent quite grasped the concept. The lines themselves are, Im assuming, the victims of a lacking translation. They usually make enough sense that you can grasp their meaning, but are weirdly constructed. Both in tone and delivery, theyre often sentences that you wouldnt expect to hear, full of bizarre syntax with oddly placed and oft repeated honorifics. This is understandable when youre dealing with a nomadic tribe with a unique grasp of English, but it extends to every character featured, even passingly, in the entire game.

Its really hard to believe at times that this came from the same studio, let alone the same writer, as the heartfelt original Syberia. Because if the third outing has one big flaw above all the others, its that its just not that interesting. Theres nothing to connect with on the same level as the previous two games; youre not invested in Kates growth because, turns out, her growth stat has capped and she has no more personal change to invest in. And youre not invested in the adventure because everything about it seems so half-hearted and thrown together. The main goal is to help a nomadic tribe of spherical midgets migrate their giant snow ostriches to the sacred grounds. Why is this a problem? Because theyre occasionally hampered by a largely indifferent and hugely incompetent military, who have decided that nomadic wandering isnt a neat fit with the modern world and want them to cut it out. Theyre awful antagonists. The commanders entire personality boils down to the fact he wears an eye patch. The soldiers under his command travel everywhere in weird half-crouch crab-walks, looking down the iron sights of machine guns that they only ever fire when there is absolutely 100% certainty whatever they were stalking is long out of danger. The entire lot of them eventually defer their decisions to a nurse, as per standard military practice, who has seemingly less motivation to put an end to the giant bird hike than anyone. 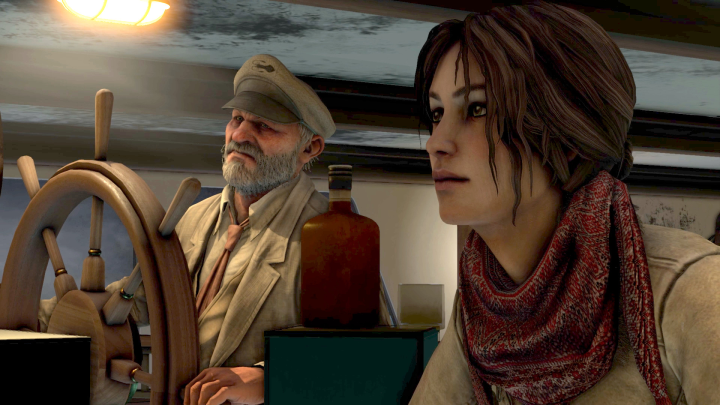 Theres gaping plot holes everywhere. In the last third of the game, Kate and her traveling band of walking maltesers come across the site of a holy shrine, only some buggers gone and built a stadium over the top on it. Legends say that theres a secret underground passage which Kate is nominated to search for. Instead, she finds the daughter of a previous migrations nomad living in the hills, driven half mad by the crushing isolation and paranoid at the thought of outsiders stealing her tribes secrets. Kate wins her around eventually and the daughter helps everyone find the shrine after a surprisingly good puzzle involving mirrors. Shes saved the expedition. As a reward, they up camp immediately and leave her to rot in a puddle of her own loneliness.

Im going to try and end this review on a good note. Im just going to need some time to think of one.

If theres one thing from the previous games thats been persevered fittingly, its the steampunk-ish setting where Kate constantly has to try and work out how to use machines that the world around her views as everyday and humdrum, but are completely alien to her. Youre often sat in front of some weird and wonderful contraption and just left to poke and pull at its clockwork innards until you figure out how it works. Theres moments of frustration, sure, but bringing an old coal dispenser back to life, or figuring out how to duplicate a key or making sense of a rusting smoke stack offer moments of intense satisfaction. Sometimes this is only mostly blighted by the awful control scheme working against you, but just being left alone to tinker with the weird and wonderful mechanisms, left to figure out their working through trial, error and common sense provide little isolated moments of brilliance.

They never last long. Soon you have to go back to Syberia 3s weird, uninteresting cast and scattershot storytelling. Plotlines are set up and then abandoned, character traits established just to be razed and resurrected as required. Early game pits you against a private investigator of some renown who successfully hunts you down from half a world away after months of painstaking work. Then you outwit him once, and hes never seen again. You meet a broken man, drowning in his own grief, fear and guilt. His decades of depression alleviated only by his crippling alcoholism. But Kate needs him to progress, so he kicks that shit in an afternoon. Your reward for limping through fifteen or so hours of this nonsense? An insulting non ending which addresses nothing and concludes even less. Theres so much to complain about and precious little to laud. Some of you might feel obligated to try Syberia 3 because of the goodwill earnt from the previous games, from the wonderful world building and evolving characters within, but theyre completely absent here. Im not overly sure what to label the amateurish mess shoehorned into the holes their absence has left, but I certainly wouldnt recommend trying to find out for yourselves.
1/5

If you enjoyed this Syberia 3 review, you're encouraged to discuss it with the author and with other members of the site's community. If you don't already have an HonestGamers account, you can sign up for one in a snap. Thank you for reading!

© 1998-2021 HonestGamers
None of the material contained within this site may be reproduced in any conceivable fashion without permission from the author(s) of said material. This site is not sponsored or endorsed by Nintendo, Sega, Sony, Microsoft, or any other such party. Syberia 3 is a registered trademark of its copyright holder. This site makes no claim to Syberia 3, its characters, screenshots, artwork, music, or any intellectual property contained within. Opinions expressed on this site do not necessarily represent the opinion of site staff or sponsors. Staff and freelance reviews are typically written based on time spent with a retail review copy or review key for the game that is provided by its publisher.