If the first Gears of War started with a wall of noise, the second starts things off with a polite cough and a guiding hand. The pretence of the formers tutorial stage hidden in a short trek through a dilapidated prison is replaced in a much-less subtle routine of showing a new rookie the ropes of how to survive in the locust-infested Sera. From the start, Gears of War 2 feels more like a video game, more rooted in what something mired in its media should be. EPIC finally lose their fight against obligatory clichés, and they tumble down onto Marcus Fenixs beefy head, unapologetic and jarring. Its to the lummoxs credit that they dont slow him down one step.

Ill try my best not to slip into the overly-comfortable rant everyones all too happy to vocalise about the pros and cons of the sequels that carelessly flood our markets, but Gears 2 really does seem to fall into all the obvious traps. Theres a lot to praise in this: new weapons find their way into your meaty hands, and its hard not to love the brand new option of turning the screaming Wretches into little ashen piles with a concentrated blast of the snazzy new flamethrower. You can follow in the footsteps of Master Chiefs third campaign and grab up bulky heavy weaponry that makes up what you lose you in manoeuvrability with rape-inducing firepower, be it the massive Gatling gun that effortlessly mows down anything or everything, or the mortar that spits out explosive servings of death from above. There are new ways to kill downed foes, and even an option to heave them to their feet and use them as a literal meat shield, but it remains easier to plug injured Locusts crawling for cover from afar.

This is to be expected. Some new tweaks work, and I will feverishly recount infinite tales of the fun Ive had with my shiny new flamethrower, but some, as appreciated as they may be, dont really bring anything new to the table. What struck me hardest about Marcus new war to save mankind seems to be what the new title seems to have left behind. 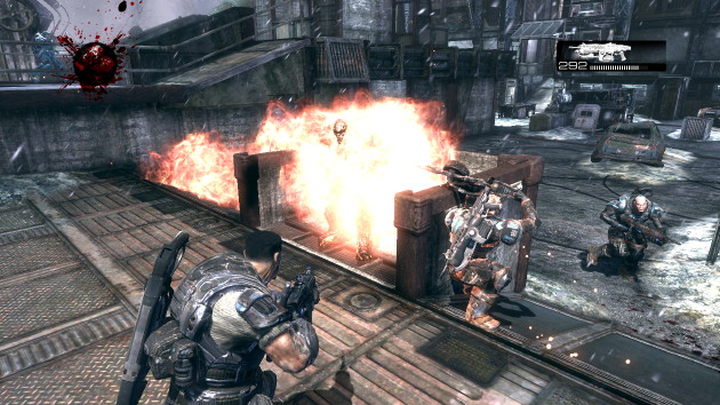 This is actually going to be a praise review by the end -- promise!

The first Gears presented a planet tinkering on the edge of destruction, and the last few humans gathered together in a desperate last stand against a rather nasty case of complete genocide. The situation was desperate; Marcus was freed from long-term imprisonment by a previous comrade, Dom, and the pair set about blowing the shit out of anything that looked vaguely scale-ridden. The Locust were a threat that climbed from the very bowels of the earth to hit Seras inhabitants right in the middle of a cruel civil war. The role you played felt like a part of something much bigger; Dom and Marcus provided the spearhead of Seras counterattack, but the gears of war turned all around you at all times, corpses of friend and foe alike left to rot on urban battlefields, hurried snatches of victory cries or death rattles playing over the airwaves. You, the player, might have been the focus of the war, but the war did not revolve around you.

Gears 1 didnt care about where the Locust came from, but only asked how many bullets could be ploughed into their humanoid forms before they fell over and died. Plot elements were hinted at, such as Doms desperate search for his lost wife and Marcus past betrayal at the bequest of his mysterious father, but it was something that happened in gasped pockets between frantic gunfights and some of the most memorable moments in video gaming. Protecting a rotting mansion as wave after wave of bulky boomers with grenade launchers and platoons of well-armed and bloodthirsty grunts storming the grounds in an arrogant frontal assault. Sneaking through a midnight ghost town haunted by flesh-stripping Krill, nocturnal bats that cause instant death the second you step into their darkened domain, and only kept at bay by igniting propane gas canisters to provide small pockets of safety. Seeing your comrades die one after the other only then to be kicked firmly in the groin while youre down by the sudden introduction of a nigh-invulnerable Berserker who chases you blindly around a once majestic church hall.

Gears 2 has no Krill, no Berserkers. It doesnt have the eye-widening stand-out moments its predecessor smugly reveled in. It has sickly, unwelcome plot points where your steroid-pumped warriors dressed in armour so bulky that Warhammers Space Marines would label it ridiculous stop fighting and talk about their feelings while tears slowly trickle down stubble-lined cheeks. It has battlezones less open than the firsts scattered corridors that would let a sneaky player flank unwary enemies and a camping sniper always be uneasy that someone with a machine gun and bad intentions would turn up unannounced on their unguarded flank. Now, almost every fight is a head-on attack or a planted defence. The only time this ever deviates is when the game tells you to do so; theres no more making these situations for yourself. 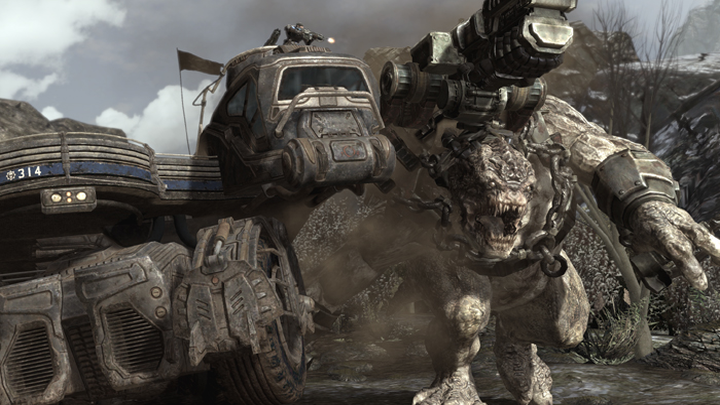 It does have a lot of vehicle sections, as all shooter games are wont to do by law these days. Some of these are tolerable.

For the most part, I dont care.

When Dom laments his dozy missing wife for the umpteenth time, I skip the cut scene and get right back to hunkering behind convenient rock formations and plough uncountable bullets into anything stupid enough to move until their limbs fall off and they stop moving. The frantic fire fights the series is forever going to shove right down your throat remain as strong as they ever were, throwing unwavering, antipoetic, gun-toting super-humans at you to mow down, explode, set on fire, cut in half or repeatedly punch in the face until they finally stop coming at you, then invites you to take on the next wave, the next set-piece, the next monstrosity.

Sure, I could carry on complaining -- and now feel I should mention the annoyingly obligatory horror stage where you take on the flood Sires, who are so hard to take down, I need to deluge into walkthrough territory:

... but even here in the spooky lab youve seen a hundred times before, you still fight against rusting security equipment and a sudden influx of Locust who wait until youre pinned down by a torrent of instant-death-dealing razor hail and snipe you out while you sprint from one safehaven to the next. I could harp on about how Gears 2 does some things wrong, how the end-of-game boss is an insulting anticlimax of the highest order, or how the experience is diluted by unwise decisions to make Gears anything but a brutal high-octane battle for pure survival, forcing people who want to see the next day to construct a wall made of still-squirming bodies and detached limbs just to catch a breather.

I have complaints to level at Gears of War 2. But I still sat through it and beat it on release day, unable to put the pad down for a second, and have still gone back to beat all difficulty levels, then play them all over again in co-op mode. I still put entire evenings aside to take on the fantastic then-new Horde mode, which plops you in the middle of a map then dares you to survive giant Maulers armed with a Morning Stars and bullet-proof shields, and Locust warriors riding sadistic bloodmounts whose only goal in life is to eat your face. Each wave you survive slowly lifts the difficulty and the numbers until you can hardly move without someone trying to claw, combust, poison or bludgeon you into oblivion.

The cogs might be grinding against excess baggage they can do without, but theyre greased by blood and coated in gore. It helps grind out unwanted agents and allows me to happily report with confidence that, still, all around you, all the time, the Gears of War turn.

If you enjoyed this Gears of War 2 review, you're encouraged to discuss it with the author and with other members of the site's community. If you don't already have an HonestGamers account, you can sign up for one in a snap. Thank you for reading!

© 1998-2021 HonestGamers
None of the material contained within this site may be reproduced in any conceivable fashion without permission from the author(s) of said material. This site is not sponsored or endorsed by Nintendo, Sega, Sony, Microsoft, or any other such party. Gears of War 2 is a registered trademark of its copyright holder. This site makes no claim to Gears of War 2, its characters, screenshots, artwork, music, or any intellectual property contained within. Opinions expressed on this site do not necessarily represent the opinion of site staff or sponsors. Staff and freelance reviews are typically written based on time spent with a retail review copy or review key for the game that is provided by its publisher.