Appropriately, it all started so miserably. The crew, such as it was, broke and splintered, limping what was left of their craft back to port after an expensive trip to the deadlands. Not many of them made it back alive, and those that did would never be the same again; the horrors theyd witnessed, the friends they lost. The toll theyd paid left them listless, slumped in corners trying to avoid eye contact with each other. They murmured to themselves in futile bids to quell the voices that mocked them from the shadows. To their credit, only a few of them took notice of their suggestions and threw themselves off ship into the cold vacuum of space. Maybe those who stayed were the real victims.

Aside from all the death, and the insanity and the crushing sense of loss, the expedition had been a roaring success. The goal was to retrieve an intricately locked chest, which now resided in the Captains quarters. As did the Captain, though her definition of success might have to be re-examined. The physician couldnt exactly know what was wrong with her, but theres a suggestion that breaths, regardless of how laboured and fitful they might be, shouldnt exhume tiny plumes of flames. Held together by hope and spite, billowing steam in its lurching wake, the craft made for a safe port, but it would never arrive in time. The Captain is dead; long live the Captain. The second-in-command inherited what was left of the ship, what was left of the crew and definitive instructions on what to do with the chest. It was to be delivered. He could have ignored this one final order, have given in to curiosity and pried the box open, or given in to greed and sold it off as a curiosity. But he thought himself an honest man, and was fond of his old captain, touched by her posthumous generosity. Still, the journey he had chosen would be perilous; his new craft was in need of expensive repairs and crewmen who didnt look like they had too many eyes if you caught a glimpse of their face at the wrong angle. It all cost money he didnt have. 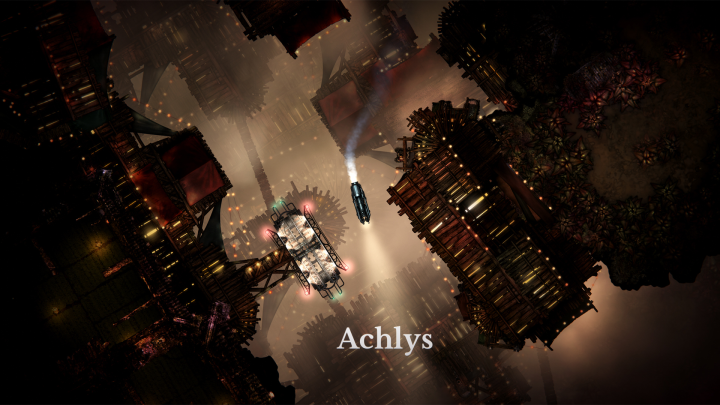 The Reach wasnt what you would call safe. It was a frontier land, of sorts. Not yet within Her Majestys embrace, yet not overrun by the anarchists and lawless. There was work to be found, but none of it without risk. Even in the scattershot isles boasting some semblance of civilization, star-mad captains fire upon anything they see, while pirates attack for the much more mundane goal of looting your corpse. But food and fuel were not free. Port Avon sold the latter for cheap, but viewed outsiders warilly. Their little island wore the mask of old country whimsy; games of cricket on the green and stiff whisky at the hunting lodge, but acceptance needed to be bought. On the surface, one could gain crediance with a few generous donations of tea, a suitably civilised offering. Port Avon tolerated people, allowed them intoxicating sips of normality, but would never accept more than a brief visit. Politely, but very firmly, loiters would be removed.

The Captain had to find new ports, new ways to survive the horror of the starlite world. Titania was a prosperous town built among the petals of a gargantuan flower. It hadnt been built by the settlers; it was discovered, intact and inhabitable but completely void of any signs of life. It was only after it started to thrive that the cloister bees arrived. The Captain had little to give, but he helped shore up defenses when he could and was rewarded with barrels of nectar to trade. They travelled to Magdalene where, for coin or tale, actors would stage your greatest desire to try and rid a little of the dread lodged deep in all that sailed. The skies ran on madness and insanity, and there was a living to be made selling reprieve, no matter how temporary. The Devils lived on Carillon, and they could fix the ills of the soul, but the price was often as horrific as the flaws they exorcised. Hybras exists on the outskirts of The Reach. There was a time when there were people there. Now theres strange human-esque fungus who warn you not to breathe in the spores.

Trade was slow because trade was dangerous. Slowly, The Captain expanded his paths of travel, risked starvation and madness on voyages into unknown sections of the map, They found the skeletal remains of the twice-doomed Isambard Line where they were chased by doomed locomotives sprouting dark, violent tendrils. The Reach was cursed, and The Reach was dangerous, but it was unclaimed by the evils of the skies and the dangerous spread of man. A crew could make a living and only almost die doing so. 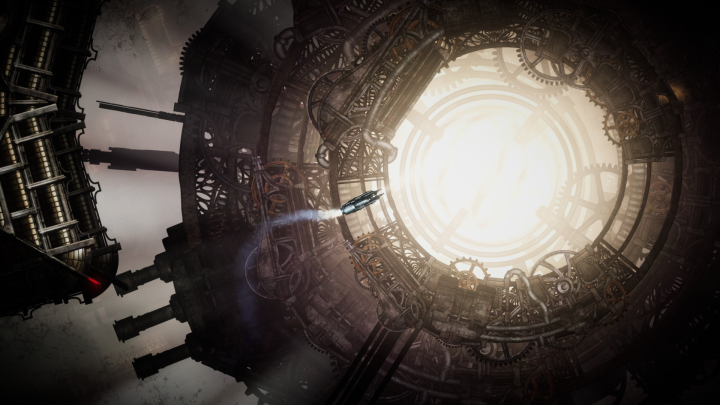 Things changed when they found Port Prosper, the far flung outpost of Her Majestys finest. Here, The Captain completed his delivery in anticlimactic fashion, allowed to linger in an impromptu wake and then reminded of his station as he was shown the door. Prosper was the largest port they had found, and the crew felt safe, secure. Here, they found direction to the nearby Albion relay, which could take them to ascended London. The Captain paid his fare and left The Reach. He would never return.

Albion was uncharted, its pathways unknown to the crew, so they struck out in a direction and they hoped to find port. Bureaucratic centres littered Albion, and any would serve as an adequate launch pad for the crews newest exploration. It was exciting at first, those first few hesitant steps into the unknown. Then the splinters of rock were slowly replaced with man-sized slithers of glass. Then they discovered ships, much like their own, long dead, covered in translucent shards. Then the ticking started. And once it started, it never stopped. It infected everything, reverberating through the bones of the crew.

The sun had died, they said. The sun had died because we had killed it and then rebuilt it anew. But the clockwork sun was as mad as the skies, only we had made it cruel, and we had made it petty. Its artificial gaze turned flesh to glass, but it wasnt enough. It learnt how to hurt its creators more and more. Obsessively. Unceasingly. The ship was glass. The crew was glass. The Captain stood on the bridge, blinking into the light even as it singed his eyes and shattered his skin. The sun, he whispered. The Sun. The Sun, the Sun, The Sun, THE SUN THE SUN THESUNTHESUNTHESUNTHESUNTHESU

If you enjoyed this Sunless Skies review, you're encouraged to discuss it with the author and with other members of the site's community. If you don't already have an HonestGamers account, you can sign up for one in a snap. Thank you for reading!

© 1998 - 2023 HonestGamers
None of the material contained within this site may be reproduced in any conceivable fashion without permission from the author(s) of said material. This site is not sponsored or endorsed by Nintendo, Sega, Sony, Microsoft, or any other such party. Sunless Skies is a registered trademark of its copyright holder. This site makes no claim to Sunless Skies, its characters, screenshots, artwork, music, or any intellectual property contained within. Opinions expressed on this site do not necessarily represent the opinion of site staff or sponsors. Staff and freelance reviews are typically written based on time spent with a retail review copy or review key for the game that is provided by its publisher.