While Half-Life back in 1998 hypnotized the stagnated first-person-shooter genre with groundbreaking narrative, enhanced puzzle elements, immersed atmosphere within cinematic settings and intelligent artificial intelligence, F.E.A.R. expertly continued to elevate the modern shooter in 2005, primary from an outstanding cinematic standpoint. Although essentially recapturing the spirit of creative Hong Kong filmmaker John Woo, the sci-fi classic The Matrix and terrifying The Ring remake, developer Monolith ambitiously established an intriguing original concept as well as an iconic figure no matter the various influences.

The first-rate atmosphere became apparent immediately as the newest member (that would be you) of the First Encounter Assault Recon is set to carry out a classified objective within a military task force that deals with paranormal circumstances. Apparently, a mad military commander has become a liability after taking command of a secret army of cloned soldiers that are telepathically linked to him, causing mayhem within a restricted area in an unspoken American city in order to acquire something unknown. The F.E.A.R. team along with a Delta Force unit obviously issue a respond to this threat. Strengthened by frequent voice mails and radio news reports, the twisted story of the commander and the mysterious appearance of Alma unfold engaging and dramatic. 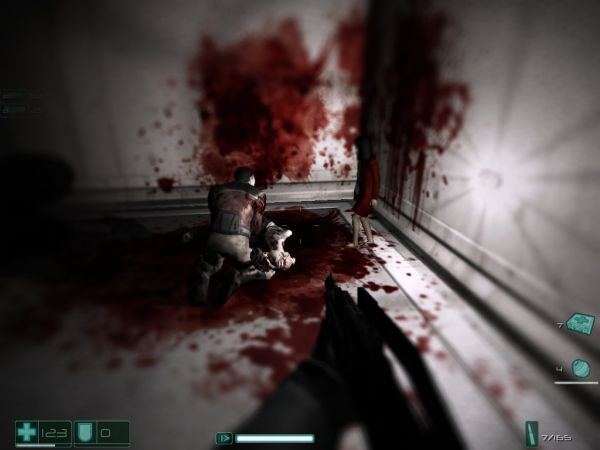 A hectic blend of dynamic action and suspenseful horror was presented. Distinguished gun battles were downright spectacular to witness, creating stunning particle effects that in combination with the finest bursts of exciting slow-motion provided dramatically beautiful and wickedly entertaining action sequences in remarkably bloody repercussions. The lighting and shadowing model kept high class in bringing the mood, and so did the excellent music and solid voice-over. The movement patterns and animations of the enemies were well-made, but were obviously not as talked-about as their strikingly sharp artificial intelligence. Encountering these aggressive and tactically oriented opponents was challenging and incredibly unpredictable; they took advantage of the games physics system by knocking over objects to create cover, they fiercely reacted to your presence and actively communicated with one another. The weapons at your disposal, though only capable of carrying three at a time, were versatile, relatively equally efficient (if approached correctly) and actually dangerous, providing powerful punches to both enemies and surroundings, meaning they were implemented for a reason since you were as vulnerable as the enemy.

Although the spiritual follow-up of Half-Life came out strong on so many levels, F.E.A.R. clearly fell short on some of them. The mention of repetitive environments that basically consisted of an industrial area and an office complex could not be ignored; at times the second-rate variety made progression jaded which fuelled a negative impression that the levels lasted too long. While the atmosphere was strong and coherent, the actual horror aspect came out less effective. The imagery was certainly on several occasions unsettling, showing off a few successful jump scares, but the scare tactics became slightly familiar over time and the pattern of predictability indisputable. However, just like Doom 3 at that time, certain tension brought out from the atmosphere was consistent enough to keep you alert and that quality somewhat redeemed the mentioned predictability. While particle effects, lighting and sound were astounding, the level design and textures were less complex and kind of mediocre looking. In addition, some of the character models felt wooden and appeared like plastic dolls. 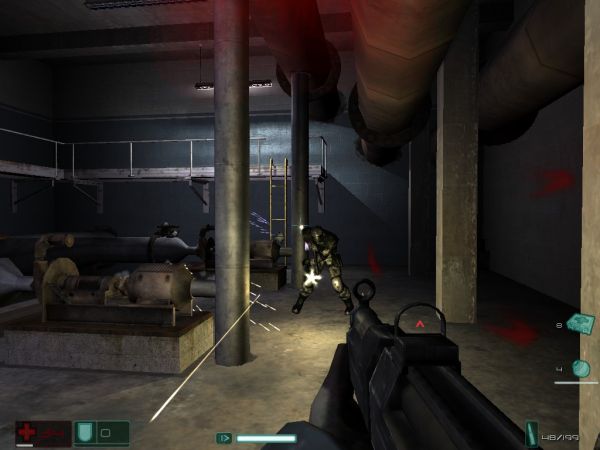 Essentially innovative and distinctly competent, F.E.A.R. elevated the modern shooter in spectacular proportions, which reasonably ended with an explosive cliff hanger. While combining action and horror, the incredibly beautiful and dynamic action portion - intensified by outstanding bullet time and amazingly clever opponents - clearly surpassed (and even to some extent neutralized) the fairly weakened horror note. Still, the unshakable lack of variety associated with the environments and level design had a significant impact on the general impression. All things considered, F.E.A.R. was and still is a skilful and relevant yet slightly jaded and overrated contribution of first-person-shooter history.

If you enjoyed this F.E.A.R.: First Encounter Assault Recon review, you're encouraged to discuss it with the author and with other members of the site's community. If you don't already have an HonestGamers account, you can sign up for one in a snap. Thank you for reading!

© 1998-2021 HonestGamers
None of the material contained within this site may be reproduced in any conceivable fashion without permission from the author(s) of said material. This site is not sponsored or endorsed by Nintendo, Sega, Sony, Microsoft, or any other such party. F.E.A.R.: First Encounter Assault Recon is a registered trademark of its copyright holder. This site makes no claim to F.E.A.R.: First Encounter Assault Recon, its characters, screenshots, artwork, music, or any intellectual property contained within. Opinions expressed on this site do not necessarily represent the opinion of site staff or sponsors. Staff and freelance reviews are typically written based on time spent with a retail review copy or review key for the game that is provided by its publisher.