Every now and then, someone will decide to have another go at making a Company of Heroes game of another name. They do this because strategy games exist in this uniquely weird environment where the best examples of each sub-genre were seemingly realised decades ago, and even the best modern efforts fail to stack up. You can explain some of that away with nostalgia-fogged memory, sure, but there has to be a reason 4X games are still chasing Master of Orion, or turn based strats still live in the shadow of X-Com (even after they completely reboot the franchise). King Art Games solution is set in a post-Great War world not quite ready to peacefully coexist, centred around not-quite-Poland (Polania), not-quite-Russia (Rusviet) and not-quite-Germany (Saxony).

The big difference is that they all possess a lumbering army of era-appropriate diesel-punk mechs, and theyre awesome. Polanias robot army, for example, all look like they could fall to bits at any second. Then they defy your expectations by mowing everything down with prolonged bursts of twin machine gun fire, or casually strolling through a building so they can punch a long range artillery cannon to death. To get through the single player campaign, youre just going to have to get used to them and all their smoke-billowing brilliance Aside from the missions where you wont. 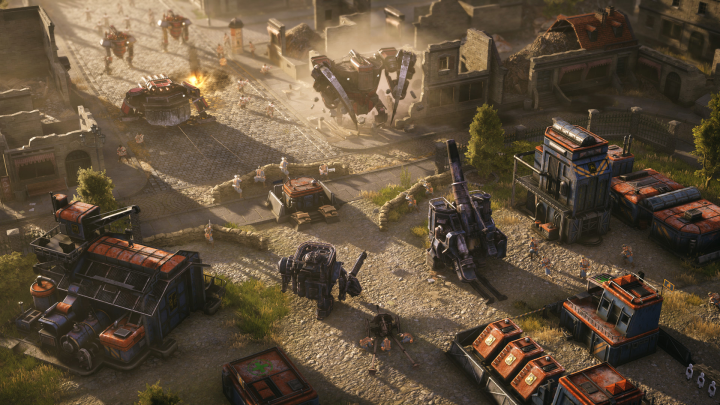 The campaign is split into thirds, where you take a turn with each faction in what could unkindly be called a disguised tutorial to ready you for multiplayer skirmishes. You learn the ropes first with Polanian hero-in-the-making, Ana Kos, who ends her slice of the game trying to evacuate shell-shocked civilians from a city under heavy siege from wave after wave of Rusviet aggressors. But it will take you a significant amount of hours before you get there. Before you learn to order platoons of foot soldiers, or build bases, or even see your first mech, you have to meet her at her humble beginnings. Ana Kos; annoyed child. The boys wont let her join in with their running snowball fights because girls cant throw.

Pelting them with snowballs for their INSOLENCE teaches you how to abuse cover, flank encamped enemies and destroy helpless snowmen. Anas story is that of a reluctant hero, always finding herself trapped in the midst of tragedy and doing the best she can in often disastrous circumstances. Later missions give you finite soldiers you need to protect throughout, needing them to liberate prison camps or capture a train station. It wont take long before she has to juggle population caps, defensive structures and production camps. An entrenched enemy often boasts the same, so you best get on with building the army youll need to both defend your own as well as take out the encroaching forces.

She also has a pet bear wholl attack anything and has no qualms with trying to maul giant metal mechs with teeth and claws alone. I adore him, but hes his most useful in missions with finite resources, helping to keep as many stragglers alive as you can while you slowly chip away at objectives. While Iron Harvest works hard to ensure it doesnt become a game where your sole objective is to build an overkill army and mindlessly trample your way to certain victory, once you have the ability to start pumping out robots, the multifaceted skillsets of your foot soldiers can get lost in the shuffle. This is a mistake considering how versatile they are. Normal infantry need not stay humble riflemen forever; if they defeat an enemy attachment of anti-mech soldiers, they can steal their dropped heavy artillery and change their unit type on the fly. They can pick up medkits and become medics, or steal tools and become engineers. As an engineer, they can build sandbag fortifications, or lay landmines or construct defensive bunkers. They can also repair damaged mechs on the field or construct bases. 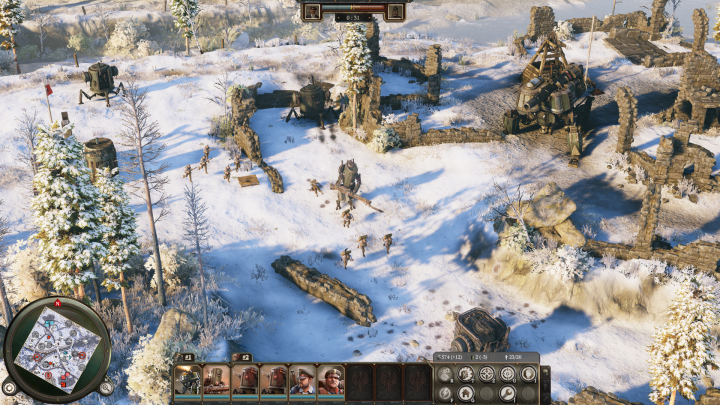 Once you gain access for workshops and barracks, the resources war can truly begin. Free to pump out production of giant robots soldiers, or recruit the ordinary meatbag variety at whim, youll need to have a healthy stockpile of both iron and oil if you ever plan to get anything built. Sometimes you can find these resources scattered across the maps in the form of supply crates, but if you want a steady influx (and you do), you need to take control of the various pumps and refineries littered about. The issue here is that enemy forces are also quite keen to hold on to these, which means the map is always alive with little running battles. Enemy forces are surprisingly competent at reclaiming lost outposts, ensuring the world is rarely static. So long as the enemy has the means of production to be a constant thorn in your side, you can bet they will be.

It will probably take you around thirty hours to complete the single player setting and, at this point, youre fully prepared to take on the numerous skirmish and multiplayer modes. Except, a lot of these options arent here yet. Iron Harvest was released alongside a roadmap, promising that a lot of extra modes will be patched in weekly, making it hard not to see the game as an incomplete release. Theres currently six skirmish maps available, and I have few complaints about the ones Ive spent time on, but theres a noticeable hole where the multiplayer content should be. Ranked multiplayer  coming soon. Quick match -- coming soon . Some co-op missions are live. The Steam achievements took about a month to get turned on, and even then, its only partial. Though the single player aspect of the game is certainly the finished product, everything else about the game feels incomplete. Because it is incomplete. By the time its all patched up and the roadmap has been travelled to completion, I suspect Iron Harvest will hit a lot of the highs King Art are hoping for, but its effectively an early access game in everything but the name. It has every chance of being a spectacularly well rounded real time strat  but its not there yet.
3.5/5

If you enjoyed this Iron Harvest review, you're encouraged to discuss it with the author and with other members of the site's community. If you don't already have an HonestGamers account, you can sign up for one in a snap. Thank you for reading!

© 1998-2021 HonestGamers
None of the material contained within this site may be reproduced in any conceivable fashion without permission from the author(s) of said material. This site is not sponsored or endorsed by Nintendo, Sega, Sony, Microsoft, or any other such party. Iron Harvest is a registered trademark of its copyright holder. This site makes no claim to Iron Harvest, its characters, screenshots, artwork, music, or any intellectual property contained within. Opinions expressed on this site do not necessarily represent the opinion of site staff or sponsors. Staff and freelance reviews are typically written based on time spent with a retail review copy or review key for the game that is provided by its publisher.