Once upon a time (or so the popular Japanese fable goes) there was a young boy born from a peach. His name was Momotaro, which literally translates to Peach Boy. Turns out, the village where he was spawned is about as good at home security as they are with name creativity, because all their valuables had been stolen by a bunch of uppity ogres. Momotaro was having none of that nonsense, so travelled to Ogre's island to get all the loot back. On his way there, he recruited a dog, a monkey and a pheasant by feeding them dumplings, because Japan. Once on the island, his trio of followers kicked up such a racket that the ogres agreed to return all the treasure so long as the animals promised to shut up.

The one thing fables all over the world have in common is a much darker version hidden in the history books, before they become diluted enough to become childrens tales. Originally, rather than wage war with noise pollution, Momotaro cut a bloody swath through the worlds ogre population, hunting them to extinction. Thats the version Ogre Tale works from; to this end, the game starts with Momotaro himself taking on the last remaining ogre, Iroha. Only, the game reverses the roles; you fight as the final ogre standing against a genocidal force. You are doomed to failure. And Iroha is doomed to a particularly unpredictable fate.

Now shes a grouchy male cat who, thousands of years later, is trying to rouse the remnants of the ogre clan to claim their revenge. The remnants consist of three chibi girls who all share a tiny apartment with Irohas feline form. I know that sounds odd. Its only going to get odder. 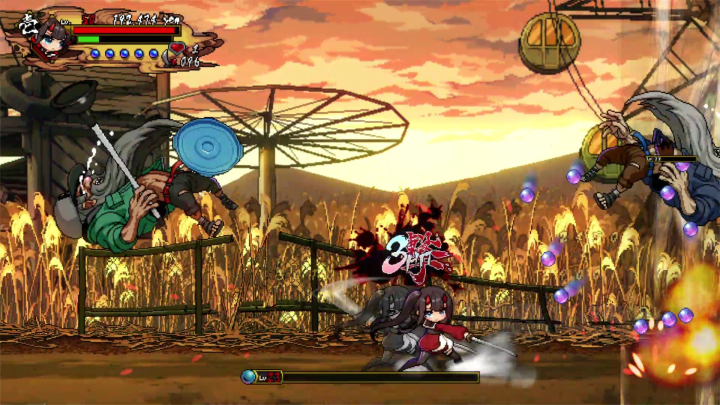 The girls, Hana, Ran and Yume, each represent an expected fight style. Armed with a sword, Rans the most balanced of the trio, while Hanas whip-based offence gives her better reach but lower attack strength. Yume, then, is left to fill the slow-but-powerful role, dragging a massive club around to cave in skulls. While there are some co-op options available, the main campaign itself is a single player affair, which feels like a questionable choice. Theres also an RPG-like element in play where you gain levels with each character at the end of a successful mission. While this does offer you some reward for going back and clearing old stages, it makes the ability to swap your fighters around at will kind of obsolete without engaging in a lot of grind. I picked Hana as my first heroine and climbed her up the levels pretty fast. However, if I wanted to give Yume a try (and I did! Tiny pigtailed girl with massive club is timelessly endearing!) she was limited to stages since beaten, too underleveled to take on current threats.

Thing is, Ogre Tale wants you to grind. It opens up a second set of optional stages entirely so you can, and then expects you to run through them endlessly to acquire resources. Only, most of the resources are worthless. The game makes a big deal about hoarding money and buying things from the online shop, such as weapons and skill boost items. But the store rarely offers you anything even close to the weapons randomly dropped by in-game thugs, meaning youll probably end the game with a huge stockpile of yen and nothing worthwhile to spend it on. Levelling matters more but, so long as you stick with the same girl and drive her stats up, youre usually comfortable against cannon fodder enemies like shambling zombies, invisible airborne ghosts and lively statues. Until youre not.

One thing Ogre Tales really commits to is its broken fables setting. For example, Momotaro has a chimera bearing the heads of a dog, a monkey and a pheasant, calling back to his trio of animal sidekicks. It also uses other such fables to fill out its ranks of boss fight encounters. The first one youll find is an especially buxom appropriation of a grateful goose who was saved by a family and supplied them with luxurious feathers as a reward. In this telling, decades of being forced to work in a sweat-shop setting has turned her homicidal, not caring if she rips apart humans or ogres in her rampage. Until you reach her, the fights have all been against minions or sub-bosses and have posed little threat. Once you reach her, you suddenly have to make use of counter, block and dodge commands youve never had to employ before, so probably aren't very good at. Your options are to either learn quickly, die a lot, or go back and grind until any attack you take is inconsequential. 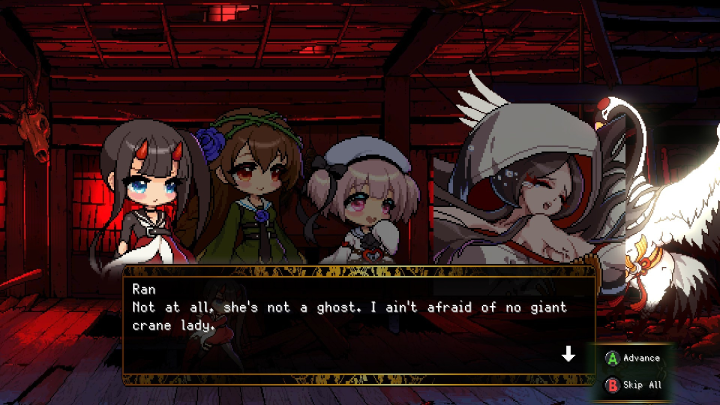 A little of option C will be most peoples go-to choice, which is a bit of a shame because the actual fighting in Ogre Tale is a lot more complex than the game might have you believe. Either criminally under-explained, or left purposefully (and maddeningly!) vague so the player has to figure out the nuances on the fly, its an engine reminiscent of MAGES previous brawler, Phantom Breaker. Just to make sure youre aware of that, while the basic functions are being explained to you, one of the girls will comment how similar the two games seem to be. Thats because the fourth wall is treated like the games biggest punching bag, meaning the numerous dialogue exchanges are very meme heavy. When youre being told that you need to start stockpiling money, Hana immediately offers to start stripping, before Yuma stops her in fear of driving the games age rating up. When Iroha launches into an overlong lecture about the fates of their kind, the girls complain that most people just want to get to the fighting and that theyd be mashing the skip button at this point. Sometimes, its funny and milage will certainly vary with each individual, but Ive never been keen on sitting through endless monologues just so someone can point out that it was an endless monologue. Maybe thats just me.

Ogre Tale sometimes feels like the fighting part of the game only exists to give further excuse to delve into its whacky meta comedy, when it would be a much stronger concept if those roles were reversed. Theres a lot of cannon fodder murdering that doesn't highlight the strong brawler foundations, even though the game wants you to revisit them endlessly rather than pit you against the considerably more invigorating boss encounters which force you to do more than mash attack and occasionally jump. But once you reach the big fights, like against Momotaro himself, you catch glimpses of a game you can really ap-peach-iate.

Yes, Im ending it on that pun. Ogre and out.

If you enjoyed this Ogre Tale review, you're encouraged to discuss it with the author and with other members of the site's community. If you don't already have an HonestGamers account, you can sign up for one in a snap. Thank you for reading!

© 1998-2021 HonestGamers
None of the material contained within this site may be reproduced in any conceivable fashion without permission from the author(s) of said material. This site is not sponsored or endorsed by Nintendo, Sega, Sony, Microsoft, or any other such party. Ogre Tale is a registered trademark of its copyright holder. This site makes no claim to Ogre Tale, its characters, screenshots, artwork, music, or any intellectual property contained within. Opinions expressed on this site do not necessarily represent the opinion of site staff or sponsors. Staff and freelance reviews are typically written based on time spent with a retail review copy or review key for the game that is provided by its publisher.