Daydreamer is a side-scrolling platformer where you control the lone surviving human on Earth, traveling across its now gloomy, steely structures, and fighting against the hostile aliens that took over long ago. At your disposal is a huge, flexible set of moves and abilities, from double-jumping and wall-hopping, to slowing down time and performing air-dashes, the latter two understandably having cool downs. Not ending there, you also have a variable collection of the usual run 'n gun arsenal to switch between as you find them, from rapid fire and spreadshot guns to the more devious lock-on and flamethrower weaponry. What's more surprising is that most of these powers are presented to you mere minutes after starting a playthrough.

Gameplay-wise, the first level is front-loaded. 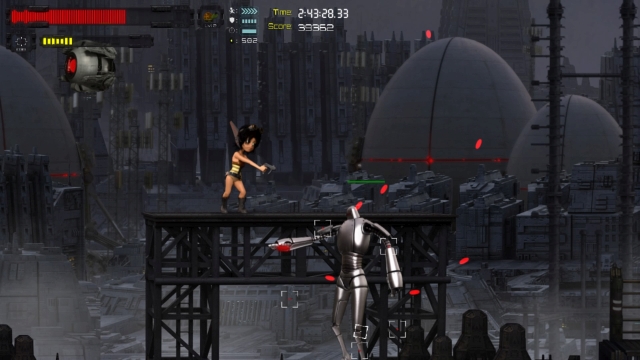 The first level is so front-loaded, that one of two things could happen going forward: the game gets really good or everything fails to live up to the beginning hype. The second one occurs. Daydreamer's biggest issue is that, with what you're presented with, it implies that you'll be involved in all sorts of crazy action moments and death defying platforming shenanigans; instead, you get a pretty straightforward platforming release that satisfies all the basic requirements for its genre. Jumping on platforms? Of course. Jumping on several moving platforms? It's in here. Standing on an elevator while dodging hazards and enemies? Sure. Jumping on more platforms? Damn straight.

Now, there's nothing outright wrong with standard platform games; they're serviceable if there aren't any glaring flaws. However, considering this one grants you so many powerful moves and weapons at the start and then tells you to use them within typical action platform levels.... well, that just creates balancing issues. The weapons you obtain along the way, for instance, are shockingly effective, some more than others. Specifically, the lock-on and giant laser beam weapons are stupidly useful since their shots can travel through ceilings and walls, deeming enemies in tricky placements irrelevant. 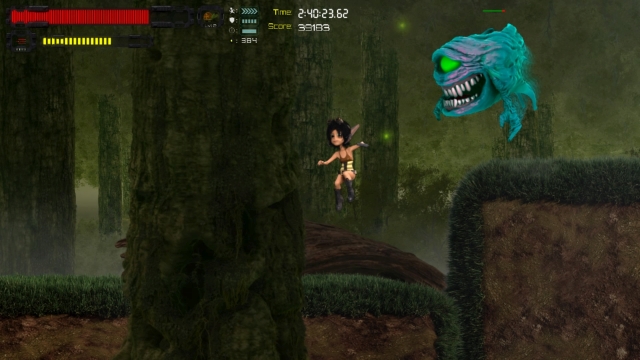 There's a "countermeasure" for abusing firearms, as your projectile energy runs out quickly, forcing a slow cool down and a switch. Though, if you manage to assemble four very capable weapons, which isn't difficult since most are given at the start, this becomes moot. Also, you can do melee attacks to conserve energy. Also, you can buy energy capsules at shops. Also, you can fully recharge your health and energy at a level's hotel, which is conveniently placed before the boss fight. Also, you can summon a healer snail anytime and have it rebuild energy during fights. As for one final stinger, you won't lose these weapons even if you run out of energy or die. The game's unbalanced weapon "system" makes fighting opponents so easy, that you will actually forget the existence of the more powerful shield and time-slow abilities...

It's a shame Daydreamer turned out the way it did gameplay-wise, because the game actually has something else going for it. As you get accustomed to the controls and powers in the beginning, you quickly realize something: everything looks insane. It's like if someone had a fever dream about H.R. Giger and decided to make an action game similar to Gunstar Heroes or Alien Soldier in that visual style; unsurprisingly, the developer mentioned he's a huge H.R. Giger fan in an interview. The first level, for instance, is nothing but miles and miles of cold, steely, and sometimes oddly-shaped construction, all while your protagonist faces off against robotic orbs, dinosaurs, and repugnant brown creatures that look like giant deformed mole rats. The latter enemies even have variations where they're speeding around in what appears to be... of all things... motorized karts? 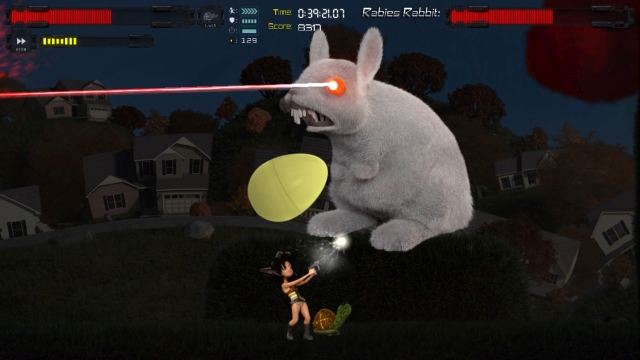 What makes all of this even more unsettling is the fact that the graphical fidelity is really high, meaning everything has a hyper realistic approach to them. Basically, the game looks like you're controlling a Troll doll going against a bunch of detailed, creepy action figures from a horror collection... in front of weird backdrops. One moment you're in a "preserved" suburban neighborhood, battling flying saucers, Gort-like robots, and a giant killer rabbit boss with laser beam eyes, and you're just in awe at how morbidly smooth everything looks, especially the rabbit when it animates. In another example, you'll be traveling through a forest where the level's main enemy type flies across the screen: a green, one-eyed ghoul that you could mistake for a creature prop from the original Ghostbusters film.

If Daydreamer was more polished, balanced things out, and ensured its level designs synchronized with the slew of mechanics and concepts introduced at the start, this might have been something. The visuals, even if they're not your preference, are definitely a sight to behold, and this becomes more impressive considering only one person made the game. Sadly, as of this writing, said guy has yet to release another product, other than a VR multiplayer title that was on Kickstarter in 2018, which was then quickly cancelled for unknown reasons. Another game in this visual style, more well-rounded, especially if the dev decided to do a genuine horror title, would be cool. Someday, perhaps?
2.5/5

If you enjoyed this Daydreamer: Awakened Edition review, you're encouraged to discuss it with the author and with other members of the site's community. If you don't already have an HonestGamers account, you can sign up for one in a snap. Thank you for reading!

© 1998-2021 HonestGamers
None of the material contained within this site may be reproduced in any conceivable fashion without permission from the author(s) of said material. This site is not sponsored or endorsed by Nintendo, Sega, Sony, Microsoft, or any other such party. Daydreamer: Awakened Edition is a registered trademark of its copyright holder. This site makes no claim to Daydreamer: Awakened Edition, its characters, screenshots, artwork, music, or any intellectual property contained within. Opinions expressed on this site do not necessarily represent the opinion of site staff or sponsors. Staff and freelance reviews are typically written based on time spent with a retail review copy or review key for the game that is provided by its publisher.