Theres an episode in the Samurai Jack cartoon where Jack is forced to delve into the innards of an active volcano. Its not the most hospitable environment, but the last stretch is particularly hazardous. Perhaps the most dangerous thing he comes across is a sheer drop down a shaft of rotating shards of razor sharp granite. He cant just drop straight down -- the fall would kill him -- so he has to skip from shard to shard knowing that a single mistimed leap could plummet him to his death. Soon after, he reached the central chamber where unstable pillars of crumbling rock spiked unevenly from a pool of magma. Jack had to hop across them before they crumbled beneath his feet to reach his goal; the den of an ancient king, cursed to live within a mammoth body of volcanic rock. To free him from this curse, Jack had to defeat his goliath form, dodging man-sized hammers and flesh-melting bolts of burning lava.

Theres a mission in Samurai Jack: Battle Through Time where youre forced to delve into the innards of an active volcano. Its not the most hospitable environment, but the last stretch is particularly hazardous. Perhaps the most dangerous thing you come across is a sheer drop down a shaft of rotating shards of razor sharp granite. You cant just drop straight down -- the fall would kill you -- so you have to skip from shard to shard knowing that a single mistimed leap could plummet you to your death. Soon after, you reach the central chamber where unstable pillars of crumbling rock spike unevenly from a pool of magma. You have to hop across them before they crumble beneath your feet to reach your goal; the den of an ancient king, cursed to live within a mammoth body of volcanic rock. To free him from this curse, you have to defeat his goliath form, dodging man-sized hammers and flesh-melting bolts of burning lava.

Battle Through Time often shows tremendous respect to its much loved source material, pulling entire sections from the cartoon itself and using them as memorable set pieces. But even when its not following its study case stroke for stroke, it still finds a way to fit in some of the most iconic characters from the show. One episode featured a robotic ninja clad, expectedly, entirely in black. The battle between it and Jack in the cartoon took place in an artistically stunning juxtaposition between light and dark, the ninja cloaked in shadows and Jack shielded by the light. While the theme may have been a little too complex to bring to video gaming life, the ninja still makes his presence known. Hell appear in a bellow of black smoke, shower Jack in shuriken then vanish again. Hell soon reappear, probably behind you, and become a frustratingly elusive foe, blocking and countering many of your own attacks while you try and keep pace. Problem is, hes rarely alone. Enemies from across the show like beetle drones, Celtic demons and khaki-clad vaguely-Australian bounty hunters will all attack you in waves. 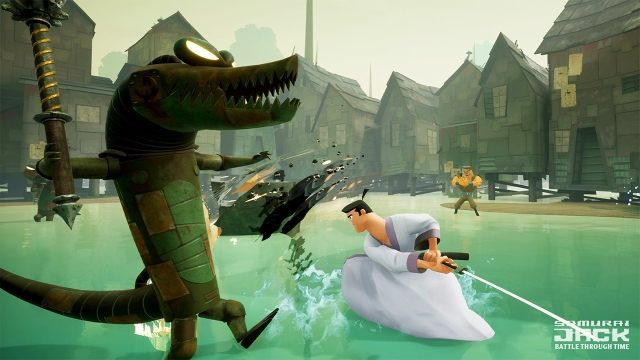 For the most part, the beetles and friends are cannon fodder, designed to be mowed down with little effort. Their main threat being sheer number rather than individual strength, letting a good player slice their way through an army, transitioning strikes and blows to form a smooth, interlinking combo of destruction. In a lot of ways, Battle Through Time is a throwback slasher, feeling less like current genre norms like Dark Souls and more like the original God of War. Bad news for fans of constant dodge rolls, I know, but it doesn't mean Jacks a mindless button masher, either. Combos can be put together by chaining together fast and strong attacks while blocking, dodging and countering still play a big part in taking down the more wily foes. To begin with, your offensive options appear limited, but your opening arsenal of magical katana and humble fist can be swollen by exploration. Soon, you can find yourself able to equip weapons like bamboo staffs, or bulky warhammers, all offering different combat styles and all possessing unique combos you can further unlock as the game progresses. If all that direct combat doesn't appeal to you, ranged weapons like kunai blades and bows can be sourced. If thats not enough, you are in the future, and theres firearms available, if you look for them hard enough.

Theres some risk travelling outside Jacks starting weapons, though, as most other options are destructible. This isn't a big deal when your shoddy bamboo staff cracks after minimal use, but late game weapons like the thunder spear (an appreciated nod to a weapon barely used in the Adult Swim resurrection of the show) are a heavy loss. You can repair the weapons at various shops scattered across the levels, but it often means sacrificing gold that could be better invested, like in upgrading weapon proficiency. It feels like a weird choice to offer a multitude of combat styles, but then lock these away behind a weird paywall of sorts. For example, a clever fighter can obtain the massive hammer from the lava king I spoke about in the opening paragraphs, and I am sufficiently clever to have done so. It wasnt a particularly easy capture though and I didn't want to risk losing such an asset in the constant running battle against the minion army. So it sat unused in my inventory like a beloved relic, where it should have been an instrument of mass destruction.

Weirdly, Battle Through Time hides a lot of things behind a currency wall. Theres a skill tree that teaches you new combos or grants statistical upgrades that lets you hoard more super attacks or absorb more blows, but you have to obtain a lot of different resources to unlock them. Everything requires skill points that you collect readily from successful battles, but higher skills will also need a supply of Bushido points, that are much harder to farm, or various gemstones you can only obtain with exploration. Affording a lot of these skills turns the game into a grind, where you replay various levels to either reacquire gems previously found in forgotten corners of the map, or to mindlessly farm already beaten battles. 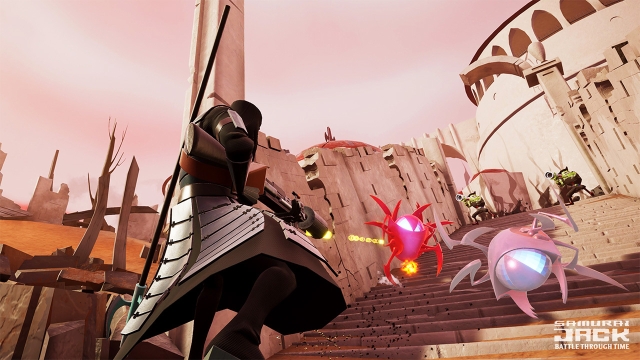 All it really does is funnel you towards one playstyle; my initial attempt on the game saw me use nothing by the magical sword Jack starts with, because I knew it wouldn't need repairing and I could better use all the gold I saved. Only after I beat the game did I go back to vanquished levels and let loose with the thunder spear or lava kings hammer, which I found infuriatingly brilliant to use. Both have styles that would have been of immense help throughout my battles, either closing the gaps on long range foes, or being excellent against large gatherings. The entire system reeks of artificially extending the life of a game, when the levels and the encounters are already strong enough to warrant replays without the unwelcome addition of monotonous grind.

Levels like Aku City, that drop Jack in the futuristic cityscape the very first episode of the cartoon placed him in, trying to evade a tribe of lion-headed hunters who have deemed him worthy prey. This ends with an escape across the roof of a running train while a couple of recently divorced bounty hunters try and put their bickering behind them long enough to capture Jacks head. Or a snow-capped forest taken directly from the Adult Swim revival that pits him against the Daughters of Aku in an emotionally harrowing battle where he struggles against not only a platoon of deadly assassins, but his own haunting guilt from how their previous encounter ended. Or any level where the snickering antagonist, Demongo, will randomly appear and summon the legion of monsters that reside within him to try and cut Jack down. The entire voice cast from the cartoon return to reprise their roles, making each encounter drip with authentic personality.

Grind is rarely a good addition but, aside from a rather pedestrian end-of-game boss battle against a not-so-all-powerful Aku, Samurai Jack: Battle Through Time does little else wrong. Its a strong throwback hack and slash game that caters not only to fans of the source material, but to fans of the genre looking for something not wallowing in steep difficulty for the sake of steep difficulty. Im not sure what I expected in an age when licensed games have long outgrown their universally awful reputation, but what expectations I did foster were exceeded.
4/5

If you enjoyed this Samurai Jack: Battle Through Time review, you're encouraged to discuss it with the author and with other members of the site's community. If you don't already have an HonestGamers account, you can sign up for one in a snap. Thank you for reading!

© 1998-2021 HonestGamers
None of the material contained within this site may be reproduced in any conceivable fashion without permission from the author(s) of said material. This site is not sponsored or endorsed by Nintendo, Sega, Sony, Microsoft, or any other such party. Samurai Jack: Battle Through Time is a registered trademark of its copyright holder. This site makes no claim to Samurai Jack: Battle Through Time, its characters, screenshots, artwork, music, or any intellectual property contained within. Opinions expressed on this site do not necessarily represent the opinion of site staff or sponsors. Staff and freelance reviews are typically written based on time spent with a retail review copy or review key for the game that is provided by its publisher.