Hes not a pebble! exclaims exasperated and awfully named earth deity, Terry. Hes a reanimated skull moulded in magical clay. Why is that so hard to understand?!

Hes speaking of the titular Skully, who is effectively a large marble sent to trundle about a tropical island and make gamers initially really angry at anything set at a slope. Being an undead ball means that your mobility options never extend any further than rolling, which is an issue if you want to go anywhere. For example, because youre made mostly out of clay, submerging yourself in water is fatal, seeing as it washes away the majority of your substance. But there are numerous crooks and rivers to cross. Fortunately, theres almost always a convenient series of cropping rock formations you can 3D platform yourself across. Unfortunately, theyre rarely flat which means learning how to land and instantly adjust yourself so you dont just roll casually off the platform to your death.

Youll drown a few times before you figure out how to stick uneven landings, but youll soon be making minute adjustments a split second after touchdown and laughing in the face of 45° angles in no time. Sections of the game where you control Skully as is  a macabre sentient beach ball of sorts  are perhaps the purest part of the game, trying to deal with and manipulate the momentum of being in control of a sphere traversing oft irregular terrain. Cocky players soon become dead ones. Its easy to rocket forward and lose control once an unexpected hill shows up, or youre forced to try and navigate a steep curving corner. But, also, play it safe and slowly poke forward in overly cautious dribbles, and youre not going to have enough momentum behind you to hop across stepping stones or navigate your way up a slope. 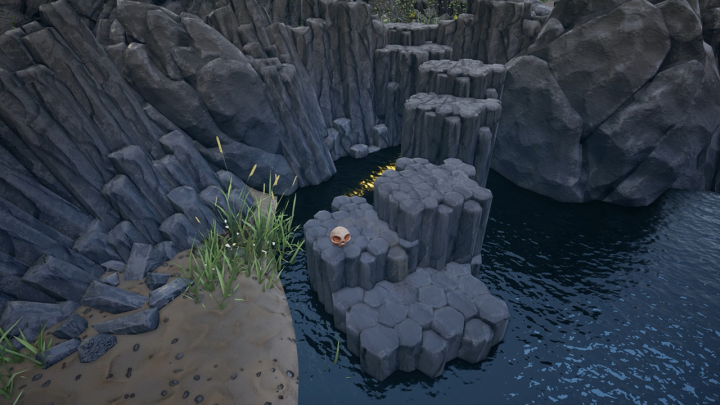 Not long into the game, though, and regular Skully will stop being your only option. For the first few stages, bubbling clay pits act as checkpoints as well as stations to top up flagging heath, but the further you delve into the game, the more useful they become. They start giving you the ability to produce clay bodies, which shift considerable sections of Skully away from pure platformer, introducing puzzle stages into the fold. The first brutish form isnt able to help you a lot with this; his skillset doesnt extend a great deal further than lumbering around and hitting things, but this allows you access to areas hidden behind cracked stone walls. Hes also the only chance you have to fight back against the islands hostile wildlife; your only option up until his discovery was to cautiously avoid them. The most common of these are these annoying sentient water bubble creatures who systematically explode, drenching the surrounding area with clay-stripping water. Its a death bath for little marble Skully; its a damp nuisance for his stompy hulk form.

The puzzle element really ramps up once his other two forms are introduced; on the surface, ones a smaller, faster model, while the other has access to a double jump. To begin with, both primarily exist to further flesh out the platforming, but possess the ability to manipulate platforms, one being able to move them at will, while the other can raise and lower them. Sometimes this means just arranging your own path, or building and dismantling platforms on the fly as you try to trek across large bodies of water. Bridge building becomes more and more complex, however, forcing you to make use of the ability to have up to three clay bodies constructed at the same time. Pop Skully out of one of these bodies, and theyll stay put, holding a platform in place for you to strategically build around. This leaves you with an open canvas and, often, several different ways to beat the puzzle. I have zero doubt a few of my resolutions werent what the developer had in mind as I mashed random skills together to make a bastardised Frankensteins solution, but if they dont like that, they shouldn't have given the hulk clay form the ability to lob Skully like a quarterback. Its in my nature to maliciously abuse that.

The games focus on puzzles over platforming slowly ramps up throughout the journey and, while I was rarely stuck for solutions for too long (and would abuse reckless lobbing if I was) the early focus on pure platforming contained the greatest hook for me. Base Skully is a vulnerable little thing with atypical mechanics that force even genre veterans to relearn the basics all over again. Gaining access to the clay forms grants you literal coats of armour, robbing Skully of both his vulnerability and his uniqueness. Though sections of the late game force you back into this role, usually having to rely on marble Skully means youve been careless with a clay form, and you only have to stick with the ball controls until you find the next pit. Though, to bring my grumbling full circle, Skullys usually very fair checkpoint system is scrunched up and tossed aside when the game forces you back to basics. You're often tasked to undertake long daunting runs of multiple curves while plagued by malicious wind currents where a single slight mistake sends you crashing to your death with zero means of recovery. 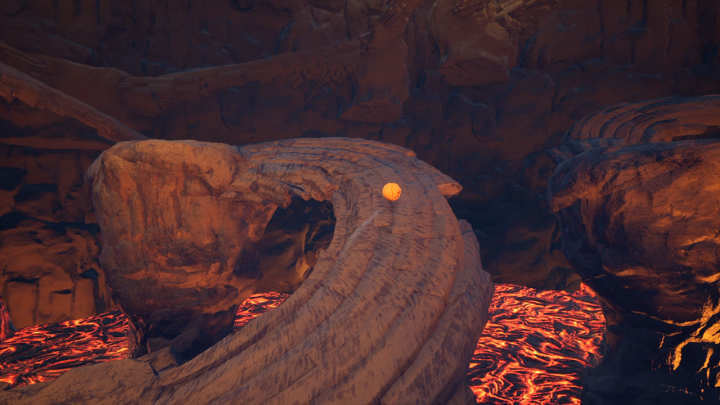 Legends say, I swore quite heavily at these points (though youll never prove it), but they did little to deter my progress. Theres an appealing old school feel to Skully that reminds me of XBOX launch title Kameo just as much as more obvious comparisons like Super Monkey Ball The tropical island youre forced to explore represents the four major elements who, themselves, are represented by deities with hilariously bad names. Like the aforementioned Terry. Theres a story about trying to wrestle control away from each other, but its all played out with a veneer of sibling bickering that distinguishes it from a lot of tales it might have otherwise felt very similar to. Most of this is played out as audio while you explore the island, so it rarely gets in the way.

Theres problem inherent; the cutscenes make the weird choice of being a collections of still screens that sometimes undercut the superb sense of personality the excellent voice acting has built.
Also! Skully is a 3D platformer, a genre that will probably never nail a perfect way to control the camera. But I found a lot to like about the game; its a lighthearted and clumsy tale about a jumping skull trying to help reunite a family. It never takes itself too seriously and youll only be infuriated when progress is a shimmering lake filled with driftwood submerged at odd angles guarded by aquatic tentacles that can bitch slap you across the screen. I received a couple of concerned complaints from the neighbours about my volume on that one...
4/5

If you enjoyed this Skully review, you're encouraged to discuss it with the author and with other members of the site's community. If you don't already have an HonestGamers account, you can sign up for one in a snap. Thank you for reading!

© 1998-2021 HonestGamers
None of the material contained within this site may be reproduced in any conceivable fashion without permission from the author(s) of said material. This site is not sponsored or endorsed by Nintendo, Sega, Sony, Microsoft, or any other such party. Skully is a registered trademark of its copyright holder. This site makes no claim to Skully, its characters, screenshots, artwork, music, or any intellectual property contained within. Opinions expressed on this site do not necessarily represent the opinion of site staff or sponsors. Staff and freelance reviews are typically written based on time spent with a retail review copy or review key for the game that is provided by its publisher.