Battle royale, when used in modern day entertainment, usually means one of two things: the 2000 Japanese film about students being forced to kill one another or the plethora of video games it inadvertently inspired. Such titles include the text-heavy, visual novel-style Zero Escape and Danganronpa, with much later games like PlayerUnknown's Battlegrounds, Fortnite, and Call of Duty: Warzone using a third/first-person shooter formula as their basis. With that said, which category does 2020's Fall Guys: Ultimate Knockout, for the lack of a better term... fall into? Neither. In a rather surprising change of pace, the game is a lighthearted online multiplayer outing that involves jelly bean-like characters in very colorful and bright settings. 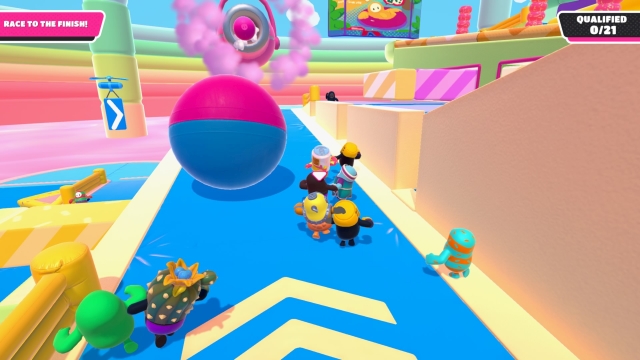 Essentially, you're one of 60 possible participants who must win challenges or make it across the finish line in several obstacle courses. Process of elimination per stage is determined either by allowing a specific number to pass the goal line, surviving a timer, or having a high enough score that you're not at the bottom. For instance, one stage involves having to steal someone's tail and trying to keep it until time runs out, and another stage requires that you run up a zig-zagging course with spinning hammers, moving bumpers, and push-walls that can knock you off a ledge... and into a rising river of pink slime that eliminates you. Of course, since you're going against 59 or so other players, there's gonna be a lot of pushing, shoving, and falling over with intentionally-sensitive ragdoll physics, very much living up to the game's title.

While Fall Guys definitely adds a different take to the genre, its core design isn't all that unique. Basically, if you've played the 3D Super Mario games or something similar, then this is just a super-simplified version of that template. If you're decent at platform-jumping in a third-dimensional setting, then you can easily pass most of the skill-based stages featuring rotating hazards. That's not a knock, as the game is clearly intended to be a fun, casual experience where you bump, stumble, and collide with dozens upon dozens of other bean-shaped contestants. If anything, making the game too hard or challenging could cause major balance issues in matches involving player participation that constantly shrink with each passing stage, not to mention turn off most players just to satisfy a hardcore niche base.

Take for example the launch batch of stages as comparison. Sessions typically last three to nine minutes, with each spanning five stages or less depending on how many players are left standing. However, some stage selections and their placements within a session leave a lot to be desired. You might start off with back-to-back, skill-based platforming stages, followed by a hectic two-team stage where your group must outscore the other by hopping through RNG-placed rings, and then for the fourth stage... a very generic memorization game where you slowly match fruit one at a time. Suffice it to say, some stages aren't as "tough" as others, which creates a weird difficulty scale when the game picks the next stage based on the number of players remaining.

Granted, Fall Guys isn't designed where you're guaranteed a win once you understand its design, especially since stages are either skill-based or heavily-reliant on RNG as a victory indicator. That's why making stages harder is a bad move, because the current set already has issues with the way they're often presented. At the same time, for the most part, that's also why the launch catalog is ideal for the game going forward; even though there are scaling issues and some very banal stage ideas, it doesn't make for frustrating playthroughs. Basically, you can have a great session at first, but easily lose a match thanks to a giant speeding ball bouncing your way or another player accidentally knocking you into pink goop. That feeling of defeat is but a very fleeting moment because you can immediately start a new session and get back into the groove. That's how accessible the game is. 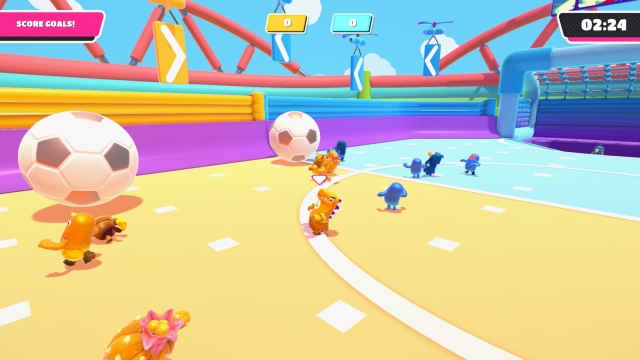 Of course, with any title that's purely an online multiplayer experience, it's going to thrive or falter based on a steady flow of new content. Silly hot dog costumes, color variation, or taunt commands won't amount to anything if the player base is stuck with only the same handful of stages every time they play. As is, Fall Guys is an amusing, whimsical battle royale that you can quickly dive into if you don't want something too complex to play at the moment. However, once you're done with the honeymoon phase of the game, that's where the real test begins. Only time will tell how this eventually pans out.
3.5/5

If you enjoyed this Fall Guys: Ultimate Knockout review, you're encouraged to discuss it with the author and with other members of the site's community. If you don't already have an HonestGamers account, you can sign up for one in a snap. Thank you for reading!

© 1998-2021 HonestGamers
None of the material contained within this site may be reproduced in any conceivable fashion without permission from the author(s) of said material. This site is not sponsored or endorsed by Nintendo, Sega, Sony, Microsoft, or any other such party. Fall Guys: Ultimate Knockout is a registered trademark of its copyright holder. This site makes no claim to Fall Guys: Ultimate Knockout, its characters, screenshots, artwork, music, or any intellectual property contained within. Opinions expressed on this site do not necessarily represent the opinion of site staff or sponsors. Staff and freelance reviews are typically written based on time spent with a retail review copy or review key for the game that is provided by its publisher.