As you window shop the PlayStation Store, glancing the countless titles that adorn the PS4 catalog, you might've strolled across 60 Seconds! and been given the wrong first impression. Touting itself as a survival game, you're given 60 seconds to grab as many essential items within your home and hop into an underground bunker before a nuclear bomb hits the area. Once inside, you and any family members you managed to snatch have to carefully ration tomato soup cans and bottled water for the coming days. Occasionally, a family member has to go back out into the radioactive landscape for more items. If you look at the images and the lone video supplemented on its store page, you might get the idea that venturing out of the bunker is a normal thing, possibly for 60 more seconds, which would strongly live up to the game's title. 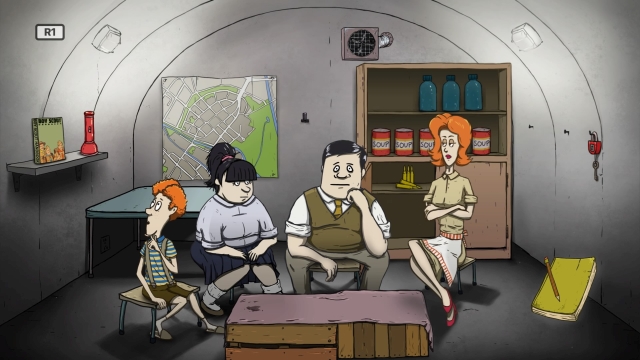 Unfortunately, that last assessment would be incorrect. To be more specific, you're allowed to roam a 3D environment, which has some questionably-stiff movement controls, but it only happens at the start of your playthrough when collecting items in a randomly-generated house. Afterwards, the majority of the game takes place in the bunker where the 3D graphics vanish in favor of a static 2D image of your family, which slightly changes after each fade out depending on their current condition. Basically, it's a variation of the Oregon Trail template where you have to make vital decisions based on circumstances presented to you at random. Now, there's nothing wrong with getting this type of game instead, as Oregon Trail to this day still manages to be an engaging title.

60 Seconds! brings a similar vibe, except instead of constantly traveling through danger, possible threats usually come to your bunker. For instance, as you're rationing, someone knocks at the door; a grumpy man is willing to trade a bag of mysterious contents for a can of soup. You take the risk, and your reward... is a cat that just hangs around the bunker in different spots. However, the feline might have some helpful applications down the line. Of course, in a game that revolves around making choices based off chance, it doesn't always turn out good. In a similar scenario, a person offering secrets for food might end up giving you a bunch of gibberish, because you soon realize that the fellow has lost his mind. 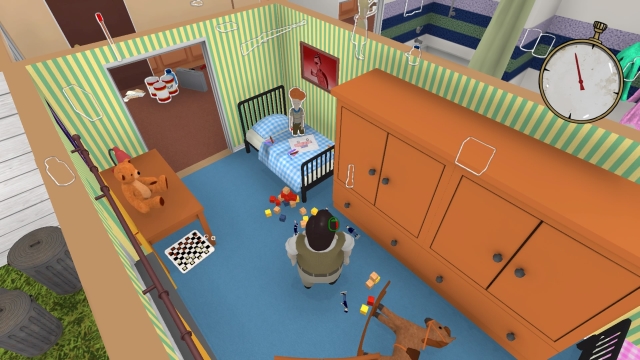 Then comes one of the key moments to your continual survival: sending someone out for more rations. This definitely comes with risks, as the chosen one might not come back with ideal items and in terrible condition because of outside radiation, especially if you don't have a gas mask. However, sending someone away also means one less mouth to feed, which is a reward in itself since you'll still face circumstances in the bunker. In a best case scenario, nothing outrageous happens, you find some extra supplies behind a crumbling wall, and the returning family member comes bearing necessary items, like a gun. Worst case, your rations are super low, one member goes crazy and runs away, you send one more person out to a nearby vehicle that explodes, and by the time the original scout comes back, everyone is dead, rations are gone, and the only item brought back is a map. The end.

If you're into that style of gaming, this will certainly fill that need on a basic level. Though, it also should be highly noted that the game's gimmick of 60 seconds is a weirdly flawed one. The devs probably assumed players will "honor" the gimmick regardless of what type of items players nabbed prior to entering the bunker. However, considering this takes place at the very start of each playthrough, you can just purposely fail to enter the bunker if you don't like the rations you managed to pick, thus retrying for a better "roll." Is that cheating? Eh. Keep in mind that your starting selection more or less dictates how smoothly your opening days go, which in turn makes for better survival odds in the long run. There's also difficulty settings that make the game much easier or harder, which completely breaks the concept. If anything, you'll do more restarts on the higher difficulties... 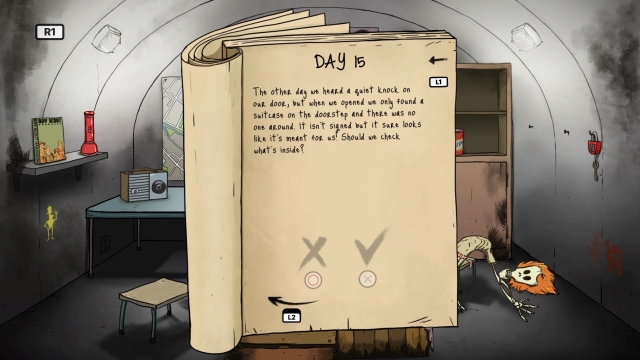 The devs also included some extra "modes," but they're just portions sliced off from the main game: the 60 seconds part only and the bunker part only, basically. There's also a challenge mode where you have to grab specific items within a minute, though this comes off more annoying than it has any right being; trying to succeed while dealing with stiff controls and randomly-generated content in a brief time limit isn't great. So essentially, you're left with a game that's passable on a simple level, since it doesn't do anything interesting or unique with the main template, as well as a gimmick that has issues, along with extras that aren't really extras. 60 Seconds! is middling at best. If you want a survival shelter game with more content, there's others like Sheltered or Fallout Shelter on the PlayStation Store, and if you just want to play something similar to Oregon Trail, well... you can just play that for free online.
2.5/5

If you enjoyed this 60 Seconds! review, you're encouraged to discuss it with the author and with other members of the site's community. If you don't already have an HonestGamers account, you can sign up for one in a snap. Thank you for reading!

© 1998-2021 HonestGamers
None of the material contained within this site may be reproduced in any conceivable fashion without permission from the author(s) of said material. This site is not sponsored or endorsed by Nintendo, Sega, Sony, Microsoft, or any other such party. 60 Seconds! is a registered trademark of its copyright holder. This site makes no claim to 60 Seconds!, its characters, screenshots, artwork, music, or any intellectual property contained within. Opinions expressed on this site do not necessarily represent the opinion of site staff or sponsors. Staff and freelance reviews are typically written based on time spent with a retail review copy or review key for the game that is provided by its publisher.