In the far off, unreachable future of 2020, in a very fictional account, New York City is attempting to recover and rebuild from a crisis that was the result of government negligence. Restoration takes so long that it continues well into 2030, when a man in a very large tower decides to take over the city with his faithful army of humans-turned-mutants. The government obviously decides to counter this uprising; with the might of the United States Armed Forces? No; the government has instead hired two very tall and beefy mercenaries named the Two Crude Dudes. 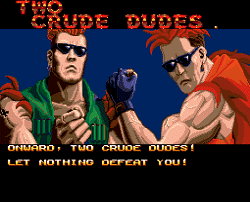 As you can deduce, despite its bleak, post-apocolyptic setting, this single-plane beat 'em up approaches the premise in a very macho, "spirited" way. This is ever so evident when you see the protagonists: two Arnold Schwarzenegger Terminator look-a-likes with super human strength, who are able to manhandle opponents like it's nothing. Whether they're against normal goons who literally run in a straight line, bouncy blood-sucking hunchbacks, or cybernetic green dogs, these crude fellows will punch and kick without flinching. They can even throw enemies and, better yet, a whole car into a crowd. And as they travel across the ruined landscape of New York City, the Arnolds will occasionally stop by a vending machine to revitalize with their favorite soft drink: Power Cola! Two Crude Dudes is so on point with its presentation, that it borders on being a parody of manly 1980s action movie tropes, especially since the game was released right at the beginning of the 1990s.

Though, once its goofy set-up is out of the way and you've been in battle for at least a stage, you'll realize combat isn't as ambitious as the plot, constantly feeling rigid and plain. There's really not any true strategy when fighting enemies, since they come at your character in a very basic manner. Most only attack when they're right beside your dude where, more times than not, you've already knocked them out. For foes that actually launch moves before getting close, it really comes down to simple AI manipulation; move away as they're activating their attack pattern, then counter. Of course, this comes with some bruising to your burly mercenary as you're learning which enemies do what and when, but considering the game's rogues gallery isn't that big, this becomes moot. 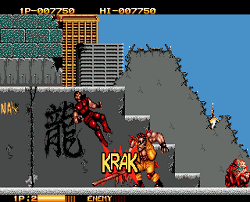 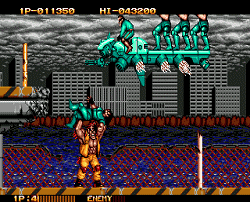 Even then, the combat "system," as bland as it is, comes with two very confounding flaws. The first is the throw button. It's neat being able to throw enemies and objects, but not when you're able to do it so effortlessly and with barely any resistance, especially in a game that comes off mindless to begin with. Most notably, you can grab people very easily when they're in the middle of jumping; you can use this to your advantage by again manipulating the AI of "tougher" enemies, forcing them to jump when you're on higher platforms. You can also simply throw the majority of opponents while ducking, which bypasses nearly every attack, even more if done in combination with the aforementioned jump trick. Once you realize this, you'll use the throw button as your default method of fighting, basically this game's version of Double Dragon's jump kick...

The second flaw is one that makes a generic game into an irritating one: invincibility frames. This means nothing on the lower scum, but when you begin fighting opponents that require multiple hits on a regular basis, Two Crude Dudes becomes a hassle. For some reason, every time these enemies get hurt or simply bump into you, they have invincibility frames for two seconds. This is annoying because, more often than not, after you elicit the frames, they immediately charge back at you while still untouchable. It's actually hard to get away when this happens, and it's even worse against bosses, since you'll likely get backed into a corner multiple times while inching away from their invulnerability. This gets absolutely irritating in later stages when you're against multiple enemies with multiple invincibility frames going off at once... and then you have to fight a boss. 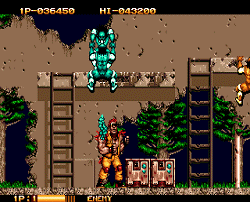 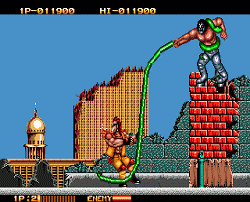 Regrettably, Two Crude Dudes is only notable for its plot and main characters. The execution as a whole is lacking quite a bit, with its weird flaws not helping in the least. If you're yearning for some action involving musclebound protagonists taking on entire armies, the Sega Genesis catalog as a lot more to offer.

If you enjoyed this Two Crude Dudes review, you're encouraged to discuss it with the author and with other members of the site's community. If you don't already have an HonestGamers account, you can sign up for one in a snap. Thank you for reading!

© 1998-2021 HonestGamers
None of the material contained within this site may be reproduced in any conceivable fashion without permission from the author(s) of said material. This site is not sponsored or endorsed by Nintendo, Sega, Sony, Microsoft, or any other such party. Two Crude Dudes is a registered trademark of its copyright holder. This site makes no claim to Two Crude Dudes, its characters, screenshots, artwork, music, or any intellectual property contained within. Opinions expressed on this site do not necessarily represent the opinion of site staff or sponsors. Staff and freelance reviews are typically written based on time spent with a retail review copy or review key for the game that is provided by its publisher.