Most people think that Streets of Rage 2 is the best old school brawler of all time. Its predecessor was a warm up, its sequel couldn't touch it, its contemporaries, like the titles in the Final Fight canon, could not quite measure up. Streets 2 met them all, including the great beat-em-up patriarch, Double Dragon, head on, and they were all found wanting.

Streets of Rage 4 is the long awaited -- and I mean LONG awaited -- sequel to Sega Genesis's king of best-of lists, by Lizardcube, the king of both beautiful hand-drawn characters and of mining for soul-stirring nostalgia. (I mean, have you seen The Dragon's Trap?)

Full disclosure: apparently, I'm an odd duck, in a few ways that apply here. I didn't have a Sega Genesis in its heyday, so I missed out on Streets 2 when it was initially out there kicking butts and taking names -- I made do with Final Fight 1 and 2 (the latter of which I really liked for some strange reason, for all its flaws). When I tried to recreate the magic of Streets 2, to see what everyone was talking about decades post-zeitgeist, naturally, the game didn't do for me what it did for everyone a generation earlier. Naturally. 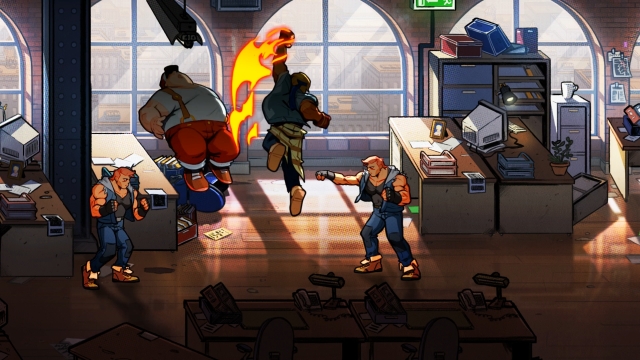 But no matter: Streets 4 clued me in. Streets 4 caught me up -- I get it now. The rocking technopop tunes to bash skulls to? Check. In fact, the famous Yuzo Koshiro is back, among others, and there are new tunes in the vein of the old, as well as old tunes remixed newly for fans to get hard to.

The accessibility that was always key is still on display. Sure you can spam jump kicks or just hammer the attack button towards stringing together rudimentary combos, or drift up and down the screen looking for throws and finding them -- on a lower difficulty level, you'll have a blast, solo or with a friend. But there's also room for combo canceling fight game nerds to put up gaudy scores and ratings on Mania difficulty, combo-ing into throws into combos. Whatever your level, you can have fun here.

The fan service and attention to detail is mindboggling; go ahead and take your bow Lizardcube and friends. Without delving into spoiler territory, Adam is back. And he looks so bad ass, I can barely comprehend. Yes, Axel and Blaze are the flag bearers: him, grizzled and musclebound, like Terry Bogard after a bender and more time at the gym; her, curvier this time out, and still as agile as ever. But, Adam!

Also among the unlockables, there are sprite heroes from the previous games you can earn for use. There are arcade machines you can enter to fight against original sprite bosses. Every bad guy you loved to thrash has been re-imagined in the painterly Lizardcube style (are these guys the best traditional artists working in the industry today? Maybe). 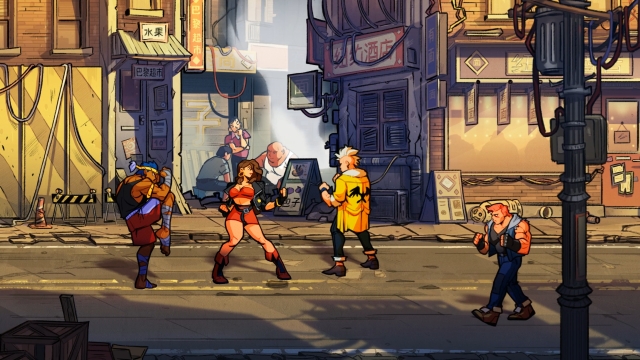 Streets 4 offers a dozen levels of sheer asskicking madness. First, beat the game in the current gen way -- you know, by clearing a level, watching your progress autosave and coming back later to have a go at the next level. And then, when you're good enough, beat the game the old school way: from start to finish at one sitting, in a cool-headed veteran run devoid of your sweaty-handed rookie mistakes.

If there's a weakness with Streets 4, it was shared to some degree by The Dragon's Trap, and it manifests as an inherent risk in overspecializing: So Lizardcube have remade a classic in the case of the latter, and here, essentially, they've made a tribute to another classic. In each case, the care is evident, as both titles are utterly gorgeous and both titles involve fastidiously crafted gameplay to match their looks. And so. Do their developers have more in them? What could they accomplish if they were not prisoners to ancient material the way they are?

Listen, Streets 4 is Streets 2 if it came out today, and that's an amazing achievement. Anytime you hit your target, it's always a measure of success. But it feels like something is missing here: maybe I wanted Streets 2 if it came out today, and then some. And then a little bit more. The Dragon's Trap didn't suffer as much given that brawlers are clunky and repetitive as a rule and flaws are magnified. Because for all of Streets of Rage 4's beauty and fan service, the game's engine is inexorably tied to that of the game it pays homage to, which, 20 years on, smells like unnecessary limitation: I'm all for keepin' it retro, but sometimes an old classic in new clothes doesn't quite a new classic make.

© 1998 - 2022 HonestGamers
None of the material contained within this site may be reproduced in any conceivable fashion without permission from the author(s) of said material. This site is not sponsored or endorsed by Nintendo, Sega, Sony, Microsoft, or any other such party. Streets of Rage 4 is a registered trademark of its copyright holder. This site makes no claim to Streets of Rage 4, its characters, screenshots, artwork, music, or any intellectual property contained within. Opinions expressed on this site do not necessarily represent the opinion of site staff or sponsors. Staff and freelance reviews are typically written based on time spent with a retail review copy or review key for the game that is provided by its publisher.