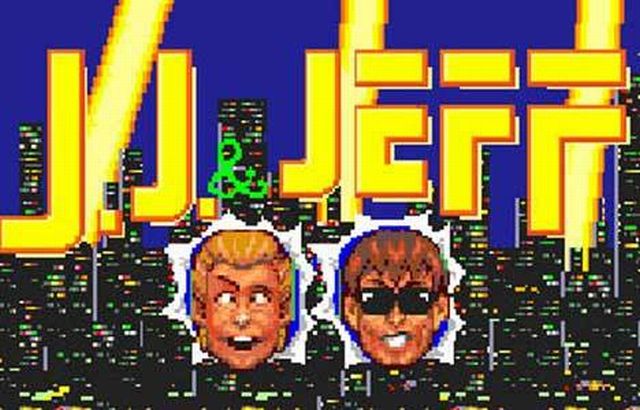 Along with 2-D shooters, Hudson Soft is known for making cutesy 2-D action-platform games. They are responsible for the Adventure Island series and the Bonk series. JJ & Jeff stands out from this crowd a bit, due to its weirdness.

Much of this title's humour was deemed inappropriate for North American audiences at the time of its release, though it will seem tame now. Thus, in bringing JJ & Jeff over from Japan, someone undoubtedly felt they were doing us all a huge favour by censoring stuff as mundane and commonplace as a fart joke (Hudson replaced the fart attack function in our version with a lame spray can). Aside from the farting, a bare buttocks or two, and the characters' faces, the games are identical, so if you've played one already, don't hunt down the other thinking you're going to uncover some super secret uncensored version.

Identity crisis aside, Hudson's effort is largely mediocre. The graphics try to be colourful, but they lack the usual vibrant punch Hudson is known for. Everything looks a bit duller than it might have been. The sounds are mostly unimpressive, but thankfully, the music is appropriately goofy and upbeat. There arent that many tracks, but the ones that are present sound suitably detective-like, with a jazzy appeal to them. Just imagine the music from the Pink Panther cartoon, with the private dick chasing our fuchsia friend--that's the most accurate impression I can give you. 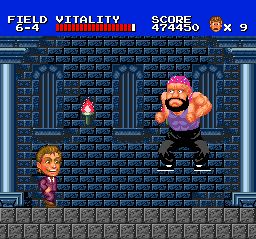 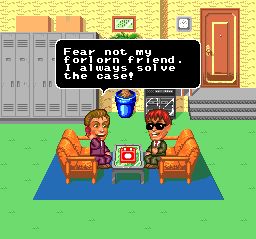 JJ & Jeff's strongest appeal is supposed to lie in its humour. You see, you choose one of the two bumbling detectives, who play exactly alike. They must put their big heads together (their idiocy quickly dashing any cranial capacity theories) on a silly mission through six levels, each with four stages. There is a boss with the suffix 'head' as part of his name concluding each of the six levels (e.g.: Knucklehead).

There is no two-player option, so the character that you don't end up choosing, be it JJ or Jeff, will chastise you throughout the game. He will hide out behind trees and in trash cans. He will throw cans at you and sometimes you'll catch him urinating on a wall. Generally he will be performing some random act of inanity when you cross his path. When you kick him, sometimes objects will fall from the sky (inexplicably) and he will end up running around with a big bump on his head, a la Flintstones. Occasionally though, when he's tired of being an ass, he will hide out in a public washroom and give you advice and clues. One of his clues will be to kick everything.

It's sound advice. Because that's the name of the game - kicking everyone and everything. Flick the turbo switch up all the way and never stop kicking. Your feet will uncover doors, secret switches, invisible platforms, and items hidden inside fences and streetlights. And naturally, you will put the boot to your enemies as well. Your other attack is to jump on them, which is pretty much par for the course in these cutesy platformers. Also, in addition to worrying about one-hit deaths and falls, you have a vitality meter that will decrease with time. So you must move quickly, collecting vitality-boosting food along the way. 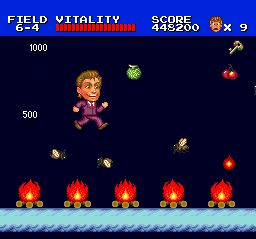 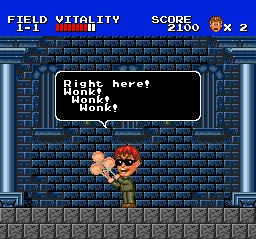 The humour in JJ & Jeff isn't laugh out loud funny (as you might have guessed by now) - it's close to the humour you might find in an Archie comic. The aforementioned weirdness can be evidenced by birds dropping their loads on you, your character picking up coins to gamble away for the chance at extended vitality, and fighting a purple dinosaur named NES (yes, it could be the Loch Ness monster they're referring to, but more likely Hudson and NEC were taking a shot at the 'prehistoric' Nintendo Entertainment System). The overall feel is silly, but undeniably enjoyable. Strangely, the light-hearted feel Hudson was going for is undermined by a very high difficulty level, which will frustrate many players expecting an enjoyable romp.

The overall package isn't bad though, and with a lot of patience and some sharp platform skills you may make it through. The ending is the funniest part, as it lists all of the enemies with witty names for each. If you like Adventure Island games, and want a different look, with decidedly harder gameplay, play JJ & Jeff at least once. Many fans of the genre yearn for a mascot game that's actually challenging, so for these gamers, it's a perfect fit.

If you enjoyed this J.J. & Jeff review, you're encouraged to discuss it with the author and with other members of the site's community. If you don't already have an HonestGamers account, you can sign up for one in a snap. Thank you for reading!

© 1998-2021 HonestGamers
None of the material contained within this site may be reproduced in any conceivable fashion without permission from the author(s) of said material. This site is not sponsored or endorsed by Nintendo, Sega, Sony, Microsoft, or any other such party. J.J. & Jeff is a registered trademark of its copyright holder. This site makes no claim to J.J. & Jeff, its characters, screenshots, artwork, music, or any intellectual property contained within. Opinions expressed on this site do not necessarily represent the opinion of site staff or sponsors. Staff and freelance reviews are typically written based on time spent with a retail review copy or review key for the game that is provided by its publisher.