I played Vapor Trail on a whim with my 7-year-old son in the background playing something else on his tablet. At first he thought it looked cool, but he thought Roblox was a shoot-em-up, so what does he know. (He manages to redeem himself later in this writing--stay tuned.) Vapor Trail does not look cool. It looks like a fairly generic copycat of a fairly generic and overrated classic in the genre -- you know the one, Seibu Kaihatsus Raiden. Back in the late 80's, Raiden was a huge deal, and Data East must have said, we have to have one of those! And the Sky Fang series was born, of which this title is the first.

Aside from being a mostly ho-hum, vertical me-too military-cum-space shooter, Vapor Trail's claim to fame, if in fact it is known for anything, are its hard-to-make-out digitized voices. Take down that gigantic tank boss thing, and before it goes up in flames, its pilot will utter, "I'm done!" It's not a bad idea, and I'm surprised more shooters of the day didn't try it. Compile's Blazing Lazers had a voice that announced power up pick ups pretty clearly; the same developer's Space Megaforce had comical utterances like the shaky pleading from one boss, "Leave me alone, will you?!" and the over-the-top ominous, "Welcome to the underworld...". 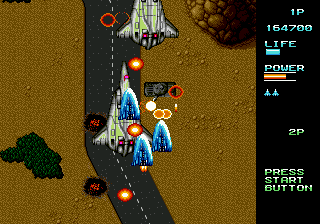 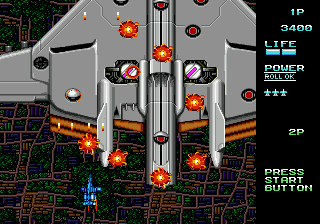 It might have been better if the trend here stopped with downing boss vehicles, but it doesn't. What you'll hear quite a bit more often is, "I can't hold it!" which means your ship is going down. You can take three hits before you are forced to hear that muffled mess and that's not a lot in a game which provides the hero with underwhelming weapons, no true screen-clearing-bomb, and inconsistent immediate respawns. As your arsenal goes, there's an odd bubble shot, the Defender, which isn't worth your time; Bombs, which are powerful but fire in a narrow stream; and Vulcan, which is your standard pea shooter, leveled up. I found Missiles,to be the most useful, as they are multi-directional and homing, and allow you to concentrate mostly on dodging while doing some damage for your own part.

Everything is relative of course, since the damage you do in general does not seem to be appreciable, even when powered all the way up. Many bosses don't give you any indication that you're hurting them either, and so you're often left firing bird shot at a barn while dodging incoming fire desperately, unsure if it's all for naught. This is where a bomb might come in handy, but instead, we have a barrel roll which is strictly a defensive maneuver and which requires time to charge after each use. Occasionally, you'll come across the odd Booster Unit that couples with your ship, and does some enviable straight-ahead damage; choosing to detonate the Booster is essentially the game's answer for a bomb, but since it doesn't come along often it presents an unhappy dilemma. 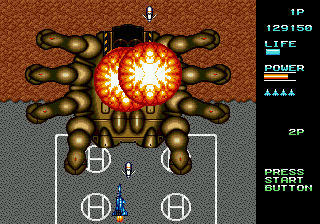 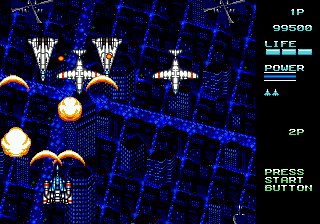 And so, while Vapor Trail isn't the hardest shmup out there, it certainly isn't easy, and you'll be hearing, "I can't hold it!" more than you'd like to. It sounds grating and laughable to begin with when the going is good, and will really start to annoy you with time and deaths in the later levels when the sky gets thick and heavy with fast moving enemies and bad guys start to enjoy leaving bullets as parting gifts when they exit the bottom of the screen. Rest assured too, that my derision where the voices are concerned isn't born of a young gamer's ignorance of context; I was playing shooters when this game saw the light of day, and Vapor Trail was never celebrated, and its contemporaries did the one thing with the voices that it did most memorably, better. (Also: Raiden does Raiden better than Vapor Trail does Raiden.)

In the end, it was my son that made me see the light. (I told you he would redeem himself.) During one of my many death spirals -- I can't hold it! -- he said this to me, without looking up: Those sound effects are so annoying. Do you like that game? Me: No, not really. Him: Do you have to play the game? And like an epiphany: No son. No, I don't.

If you enjoyed this Vapor Trail review, you're encouraged to discuss it with the author and with other members of the site's community. If you don't already have an HonestGamers account, you can sign up for one in a snap. Thank you for reading!

© 1998 - 2022 HonestGamers
None of the material contained within this site may be reproduced in any conceivable fashion without permission from the author(s) of said material. This site is not sponsored or endorsed by Nintendo, Sega, Sony, Microsoft, or any other such party. Vapor Trail is a registered trademark of its copyright holder. This site makes no claim to Vapor Trail, its characters, screenshots, artwork, music, or any intellectual property contained within. Opinions expressed on this site do not necessarily represent the opinion of site staff or sponsors. Staff and freelance reviews are typically written based on time spent with a retail review copy or review key for the game that is provided by its publisher.