Shadow Gangs wants so badly to be a game that I want so badly to have: a new Shinobi game. And not the somersaulting, rainbow shot-making, wall-jumping Revenge of Shinobi, or Shinobi III variety either; the stripped down, hardcore, one-hit-and-you're-dead original Shinobi and its underappreciated follow up, Shadow Dancer. And the thing is, this game nearly achieves its lofty goal on the strength of being such a pretty (I don't love the hand-drawn look, but boy is it pretty), hard rocking, and carefully copied update. But then it doesn't, because while crafting their facsimile, the developers failed to make it fun.

All of the classic Shinobi conventions are here, and I mean all of them. Your hero, Dan, will saunter through side-scrolling environs, tossing shurikens to kill common thugs and ninja alike from a distance -- whipping out a gun when he's powered up -- and he'll kick and katana-slice foes when up close. Dan can do a high jump to reach a second tier of the screen if available -- from a train platform to atop the train, for example -- and, actually, in this game, some stages feature as many as five such tiers. Gunmen literally lie in wait on the wrong side of crates or other obstacles, demanding perfect timing for you to hop over and kill them between bullets. 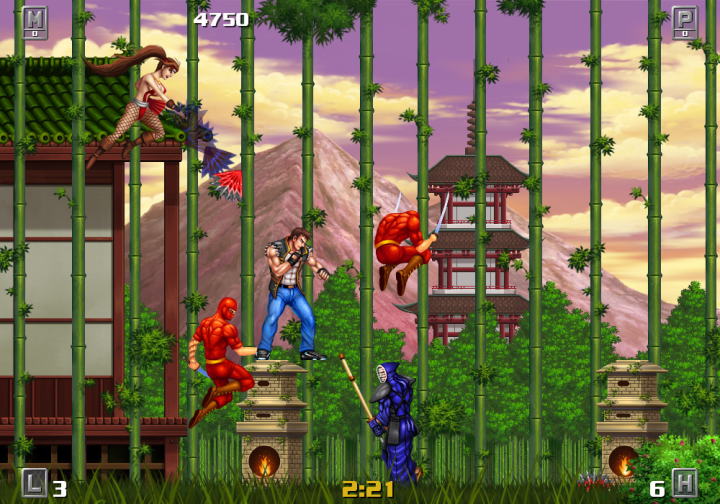 Hostages are tied to pillars and await rescuing, often behind those hulking bastards that every Shinobi fan hated -- you know the ones, who flung boomerang blades either high or low, making it difficult to get in close. All of this should sound very familiar. Hell, Shadow Gangs even offers those nearly impossible first-person perspective bonus rounds, which asked you to toss shurikens at ninjas who slid back-and-forth as in a shooting gallery. Miss one or two, and it would be round over. Except here, there are plenty more ninjas, you need only miss one for instant failure, and fading in and out of your embarrassing performance goes on too long.

And so I guess that bonus round example can serve as a microcosm of the entire, mostly miserable experience. Shadow Gangs wants to be Shinobi and it wants to be hardcore so bad, it doesn't seem to even care or notice that it's not being enjoyable. I went back and replayed those old titles which acted as inspiration, in the interest of being fair to this new one. The classics absolutely relied on rote memorization -- you had to know where enemies were and what they could do, and your margin for error was slim, but the margins were there, and rather importantly: the levels were small. 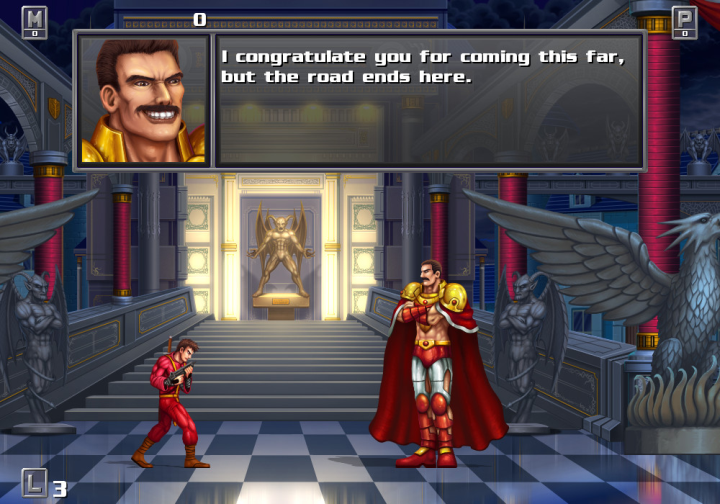 Shadow Gangs further reduces those margins, and gives us long, repetitive, bloated stages to inch our way through. The developers tried to mitigate this by providing a checkpoint here and there, but it's just not enough. Playing on "easy" (aka Rising Ninja) allows you to take three hits before dying, and provides a whopping seven lives. And it's still not enough. I'll be clear: all of these band-aids were sufficient to see me through to the end, but none of it was enough for me to have a good time doing so.

Progress is made on the backs of countless deaths and restarts, as you constantly work at pushing deeper into long levels where you must be perfect as you're besieged by deadly enemies who often appear from a wisp of smoke in your midst. And as dispatching them takes good timing, moving quickly as though you might speedrun the affair, leads to foes attacking in large groups that usually cannot be outrun, and are not put down easily. Every level has three stages within -- with the third as the one where the boss hangs out -- and needing to continue on stage three puts you back at stage one. The menu's level select permits you to keep trying that level that's kicking your behind until you figure it out or until the last drop of already meager enjoyment on offer has run dry.

And so despite its high production value for a game like this, I don't see how I could recommend Shadow Gangs -- perhaps to old school sadists? Regular, run-of-the-mill retro gamers definitely need not apply. Your idea of fun must include traversing several minutes-long stages which you must have thoroughly memorized, with the spectre of death and restarting over your shoulder all throughout. Despite what the developers of this game might think, that wasn't Master System Shinobi, nor was it Genesis Shadow Dancer -- two games with short, hard levels (hell, the former even gives you a life bar!). Tragically, my search for a truly worthy follow up to their legacy must continue.

If you enjoyed this Shadow Gangs review, you're encouraged to discuss it with the author and with other members of the site's community. If you don't already have an HonestGamers account, you can sign up for one in a snap. Thank you for reading!

© 1998 - 2022 HonestGamers
None of the material contained within this site may be reproduced in any conceivable fashion without permission from the author(s) of said material. This site is not sponsored or endorsed by Nintendo, Sega, Sony, Microsoft, or any other such party. Shadow Gangs is a registered trademark of its copyright holder. This site makes no claim to Shadow Gangs, its characters, screenshots, artwork, music, or any intellectual property contained within. Opinions expressed on this site do not necessarily represent the opinion of site staff or sponsors. Staff and freelance reviews are typically written based on time spent with a retail review copy or review key for the game that is provided by its publisher.