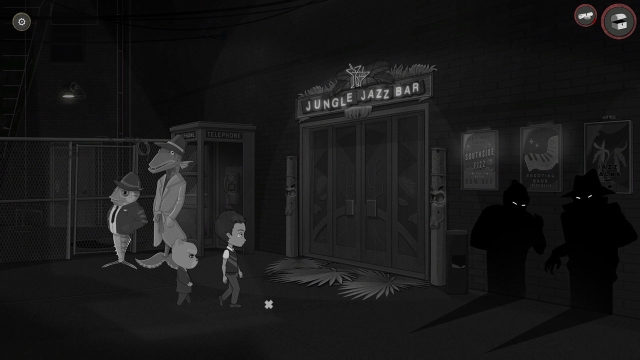 Bear With Me is a lot of things on top of a lot of other things. Theres a nice confusing start to this review. Let me try to explain: primarily, its a short, approachable adventure game with a heavy noir influence. Like, really heavy; theres a monochrome colour scheme going on, backdropped to 1950s American chic. But for all the fedora-tipping gumshoes and droning monologues, its less a period drama and more a childish reimagining. For example, one half of the hard-boiled protagonist pairing is a detective who also doubles as an adorable teddy bear. The other is literally a child.

So, its safe to assume the entire premise is just a childs imagination gone wild. I mean, probably? Theres a goofy innocence prevalent throughout, and I dont think the game can process more than a handful of sentences before reaching for a low hanging pun. On the other hand, the focused case involves robots being stolen, murdered, and harvested for parts. Which is grizzly as hell, but it only happens to robots, who can be rebuilt with no adverse effects. Theres a lot of likeminded double-sided instances throughout, things that creep towards a dark edge but given an innocent explanation. Fluffy button-eyed private eye Ted E. Bears big open secret is that a relationship turned sour has driven him into a drinking habit that threatens to devour him whole. But the drink in question is carrot juice. Sure seems to affect him as hard as a fifth of scotch might, though.

Hell mainly stay just sober enough to stumble through The Last Robots 2-3 hour plot which should be traversed with little difficulty. Though the games loathe to skimp on characters and locations, the puzzles are of little obstacle and often self-contained enough that pixel hunting and random clicking shouldnt be especially common. It leaves you time to enjoy the bizarre duality of noir-laced whimsy. Talking toy robots or cute anamorphic animal people; its just the majority of the ones youre forced to hang with are often hardened criminals. 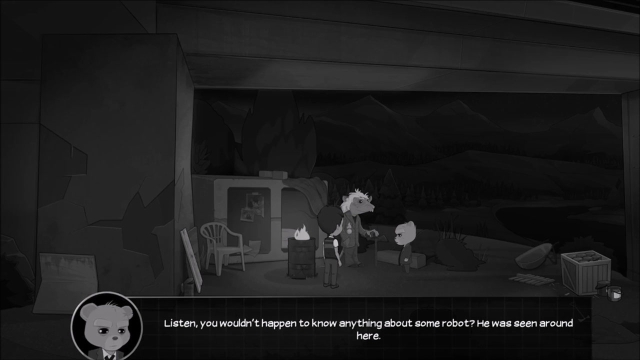 Its worth noting that The Last Robert is a prequel for the larger Bear With Me parent game that Ive yet to play, so Im probably missing out on a slice of nuance somewhere. The main game pairs Ted up with Amber, while the prequel sticks him with her less enthusiastic brother, Flint. To set the tone, the game has bearly (youll never out-pun me, game!) began before he complains about not really being into all that detective stuff, and that hes much more comfortable around superheroes. Yet here he is anyway, on the bequest of his sister. The pair's shared affection for Amber is more or less the only thing prompting even the most basic form of cooperation, but the poorly disguised disinterest and back and forth bickering makes for an interestingly dysfunctional partnership. If the case is ever going to get solved, Flints probably going to need the professional detective onside. Ted, on the other paw, needs help with tasks as hazardous as reaching moderately high shelves.

If its purpose is to give returning fans a little more of the world to reveal, it does that, despite its short runtime, but maybe its not the best starting point. Check me out, doing everything backwards. Who knew I had no organisation skills.

If you enjoyed this Bear With Me: The Lost Robots review, you're encouraged to discuss it with the author and with other members of the site's community. If you don't already have an HonestGamers account, you can sign up for one in a snap. Thank you for reading!

© 1998-2021 HonestGamers
None of the material contained within this site may be reproduced in any conceivable fashion without permission from the author(s) of said material. This site is not sponsored or endorsed by Nintendo, Sega, Sony, Microsoft, or any other such party. Bear With Me: The Lost Robots is a registered trademark of its copyright holder. This site makes no claim to Bear With Me: The Lost Robots, its characters, screenshots, artwork, music, or any intellectual property contained within. Opinions expressed on this site do not necessarily represent the opinion of site staff or sponsors. Staff and freelance reviews are typically written based on time spent with a retail review copy or review key for the game that is provided by its publisher.